Shares of Abbott Labs hit a 52-week high yesterday. Let's take a look at how the company got there and whether it still has room to run.

How it got here
The big pharma stock continues to climb as investors look forward to the proposed split later this year. Abbott plans to spin off the pharmaceuticals unit from its medical devices and nutritional products businesses. This is a smart strategy going forward because it could help offset investor worries over the 2016 patent expiration for Humira. Sales of the drug, which is used to treat inflammatory diseases, made up 20% of the company's revenue in 2011.

When the split happens toward the end of 2012, the Proprietary Pharmaceuticals segment will be renamed AbbVie, while the remaining business, including its medical devices and nutritionals units, will keep the Abbott name. Abbott's $6 billion nutritionals business is also taking center stage in a shift from its 124-year-old drug business to focus on consumer products in emerging markets. According to The Wall Street Journal, Abbott expects the nutrition segment to climb to $10 billion by 2015.

As part of this new strategy, Abbott has partnered with Indian biotech company Biocon in a move to tap into the developing market in India. Through this partnership, Abbott plans to make nutritional supplements more appealing by tailoring them to the local culture.

How it stacks up
Let's take a look at how Abbott compares to industry peers and other drug manufacturers. 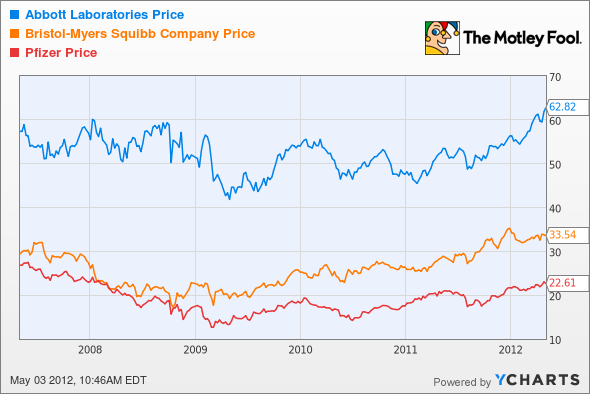 All three of the companies pay attractive dividends. Abbott has a dividend yield of 3.3%, which is below both Pfizer at 3.9% and Bristol-Myers Squibb at 4.1%. Pfizer recently sold its nutrition business to food company Nestle (OTC: NSRGY) for $11.85 billion, strengthening Nestle's hold on the Indian market. According to data from Euromonitor, Nestle currently commands more than 75% of the market for baby formula in India.

What's next
Abbott's stock should continue to push higher ahead of the company's spin-off. Meanwhile, its presence in emerging markets creates an opportunity for additional growth. However, the company warns that sales in these markets are often cyclical and vulnerable to currency fluctuations. That said, Abbott has successfully navigated these headwinds in the past. Last year, Abbott generated $10 billion in emerging-market sales, according to The Wall Street Journal.

The Motley Fool CAPS community gives the stock an impressive five-star rating, with the majority of players expecting it to outperform. Let us know in the comments section below if you think Abbott Labs' strong performance will continue, and don't forget to add these stocks to MyWatchlist -- the Motley Fool's free tool that lets you track and monitor your favorite companies.

Will Abbott Labs Continue to Climb? @themotleyfool #stocks $ABT $PFE Next Article
Current