Shares of Kinross Gold hit a 52-week low on Friday. Let's take a look at how it got there and whether cloudy skies remain in the forecast.

How it got there
Gold mining companies are quietly getting trounced worse than just about any other sector in the market over the past month, despite the yellow metal they sell hardly budging.

Like most mining companies, Kinross Gold is suffering from a mixture of higher labor, diesel, power, and royalty costs which are increasing its cash cost per ounce and making it less efficient to mine. But perhaps the most troublesome factor plaguing Kinross is that the overwhelmingly inflating costs of building a mine have caused it to delay the build-out on some of its properties -- most notably the Tasiast mine in Mauritania, which necessitated a $2.94 billion writedown in the fourth quarter.

As I said, this isn't the first time we've seen mine-building costs get in the way of a company's bottom line. Agnico-Eagle Mines' Goldex mine is closed for safety issues, which nonetheless forced the company to take a very large impairment charge in its recent quarter. Newmont Mining recorded a $1.61 billion loss last quarter on a writedown of its Hope Bay mine in Canada.

How it stacks up
Let's see how Kinross Gold stacks up next to its peers. 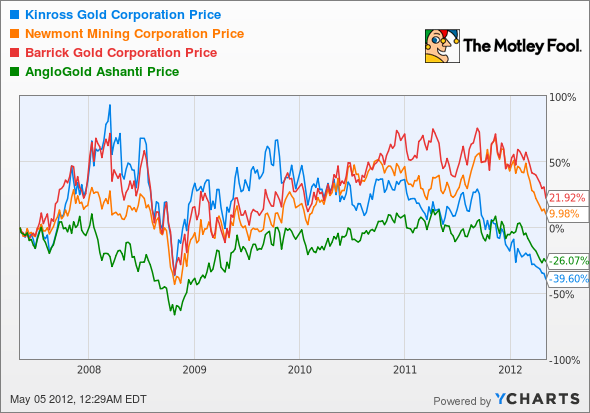 Considering that gold is on an 11-year winning streak, mining stocks have vastly underperformed the yellow metal.

There are values to be had throughout the entire mining sector -- it's just that each stock in the sector comes with its own extra baggage that investors need to cope with. Barrick Gold and AngloGold Ashanti, for instance, are dealing with rising labor and fuel costs, which are rapidly increasing their mining costs. Newmont and Kinross are blasting shareholders with one-time writedowns due to project delays which, in turn, often reduces near-term production outlooks. Still, it's very difficult to overlook the undeniable value that the gold sector has become.

What's next
Now for the real question: What's next for Kinross Gold? The answer is going to depend on whether Kinross Gold can keep its costs under control and whether or not it can maximize shareholder value if it decides to sell its stakes in certain mines.

Our very own CAPS community gives the company a four-star rating (out of five), with an overwhelming 95.7% of members expecting it to outperform. Although I have shunned Kinross Gold up to this point, I'm now ready to make a CAPScall of outperform on the stock.

Part of the reason I'm so bullish on Kinross now is its possible sale of two mine interests: its 50% interest in the Crixas mine in Brazil, which is co-owned with AngloGold Ashanti, and its 25% interest in the Cerro Casale mine, which is majority owned by Barrick Gold. Crixas contributed to 7% of Kinross' South American gold production last year while Cerro Casale's proven and probable reserves (in Kinross' case) stand at 5.8 million ounces of gold, 14.7 million ounces of silver, and 14.4 billion pounds of copper. In short, Kinross has a mountain of reserves that it can turn into cash in an instant to fund other projects if it chooses to.

If you'd like the inside scoop on three more stocks that will help you retire rich, then simply click here for access to our latest special report -- it's free!

Craving more input on Kinross Gold? Start by adding it to your free and personalized watchlist. It's a free service from The Motley Fool to keep you up to date on the stocks you care about most.