The importance of global diversification cannot be overstated. Not only does it expose investors to the blistering speed of the developing world's economic growth, but it also insulates stock returns from regional economic downturns like the Great Recession. Without a doubt, it is one of the principal keys to successful investing in modern times.

The safest and easiest way to do it is by investing in American companies with significant operations abroad. Of particular interest on that front is Wal-Mart , the ubiquitous discount retailer that's expanding its reach around the world.

The promise and perils of investing abroad
The most obvious reason to diversify globally is to gain exposure to the developing world's economic growth. Over the past decade, emerging markets have expanded much more quickly than the developed world has. South Asian economies, led by India, have more than tripled their output since 2000. And if you take Japan out of the equation, the East Asian economies have done the same, going from $3.3 trillion in 2000 to $11.2 trillion in 2010. In fact, North America is the only continent that hasn't at least doubled its economic output since the turn of the century.

Global diversification also acts as a hedge against regional economic downturns, a benefit that revealed its advantage in 2009. Triggered by the financial crisis, output in North America and Europe shrank that year by 3.4% and 4.3%, respectively. Yet South Asian economies simultaneously grew 8.1%. And while output in the entire East Asian and Pacific region contracted by approximately 1%, weighed down by Japan's 6.3% decline, the region's largest economy in China grew a staggering 9.2%.

Despite these advantages, however, it's important to note that investing in international markets can be risky. Just last year, a wave of fraud washed over Chinese small-cap stocks, costing investors billions of dollars. A typical example was Chinese fertilizer producer Yongye International , which saw its shares lose nearly 60% of their value after questions were raised about its product, distribution network, and structural opacity. Even the most sophisticated of investors were caught in the undertow, as famed hedge-fund manager John Paulson purportedly lost more than $100 million when Chinese forestry company Sino-Forest was revealed to be a fraud.

The best of both worlds
The best way to balance these benefits and detriments, in turn, is to invest in American companies with global exposure. Two of our favorites here at the Fool are Yum! Brands , the fast-food operator that got 43% of its 2010 pre-tax profit from China, and McDonald's , which gets 56% of its pre-tax profit from abroad. And perhaps even a better example is Wal-Mart, the ubiquitous discount retailer.

Founded in 1962 with its first store opening in Rogers, Ark., the discount retail chain hardly needs an introduction. It's the world's third largest employer, after only the American and Chinese militaries; the second largest publicly traded company in terms of annual revenue, with nearly $450 billion in sales over the past 12 months; and the only non-energy company to make the top nine in this regard. It's also the 10th largest publically traded company in the world with respect to market capitalization, coming in at $201 billion. Indeed, none other than Warren Buffett, the chairman and CEO of Berkshire Hathaway , has acknowledged that not investing in Wal-Mart earlier was one of the biggest mistakes he's ever made. Berkshire currently owns about 1% of the company. It should be no surprise that the discount retailing giant has an established presence around the world. It operates under 69 different banners in 27 countries, with nearly 53% of its 10,185 locations situated outside North America. While Latin America serves as its biggest international market -- it has more than 2,100 locations in Mexico alone -- its unit count is growing quickly in emerging giants such as China, where it has 370 locations and counting. Excluding Sam's Club, a full 32% of the company's sales derived from outside the United States in fiscal year 2012.

And it's this diversification, in large part, that has contributed to both the company's growth and the relative stability of its stock price over the past several years. Although same-store sales have suffered recently in the United States, Wal-Mart's top-line revenue has expanded consistently since 2008, going from $378 billion to $447 billion in the most recent fiscal year. Its stock price was affected less detrimentally than both the broader market and its less globally diversified competitors, Costco and Target. 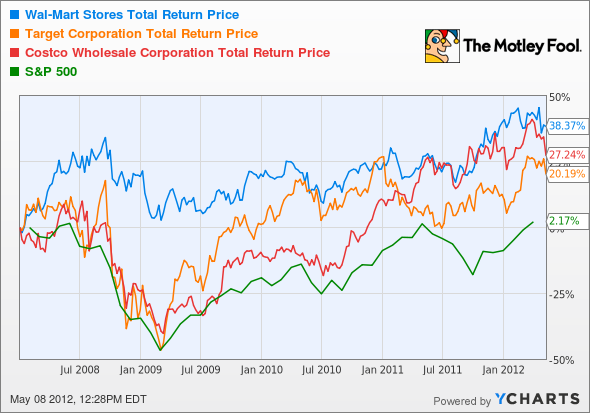 Foolish bottom line
There's no question that Wal-Mart has problems. Just recently, for example, it was accused of bribing government officials in Mexico. Even so, its globally diversified operations should serve to both preserve and grow investment capital over the years to come. And it's for this reason that I believe Wal-Mart is a good stock for the long term.

For a handful of other companies like Wal-Mart, check out our recently released free report about three American companies set to dominate in emerging markets. Among others, it includes the identity of a stock that has doubled in the past five years and still pays an atypically generous dividend yield. Access this report while it's still available -- it's free.