Facebook is here. If you didn't already know that, then quite frankly you need to get out more. And now that the social-media behemoth is a publicly traded company, it's a good time to start digging through SEC filings to see whether the social networker can live up to the hype. 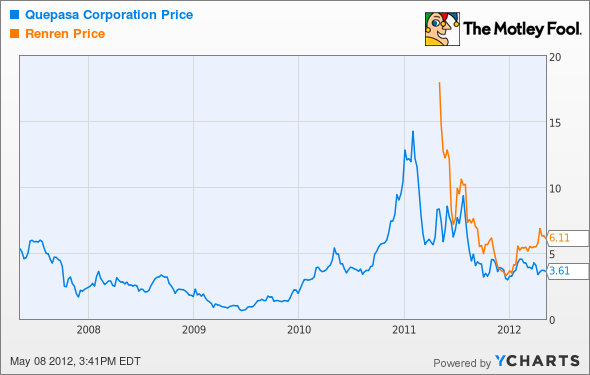 Both companies dropped precipitously back in February on the initial reports of Facebook's impending IPO. Sorry, fellas, but Facebook itself wants to be both the "Facebook of China" and the "Facebook of Latin America" -- although it's restricted in China so the company has nearly 0% penetration there.

Facebook's Asia segment, which also includes Australia and New Zealand, now has 230 million monthly active users, or MAUs, up from 81 million two years ago. In comparison, Renren has 147 million "activated" users, but only 38 million of these could be considered MAUs. In a country whose population totals 1.34 billion, there are still a lot of people to connect in the Middle Kingdom if Facebook can ever get into the country.

Latin America is bundled along with Africa and the Middle East as part of Facebook's "rest of world" segment, which now boasts 242 million MAUs. Facebook has 45 million MAUs in Brazil, while Quepasa acquired Brazilian social-game maker XtFt over a year ago. Quepasa's Latin American platform had just 1.2 million MAUs at the end of last year, down from 2.8 million a year prior. These geographic segments are the biggest opportunities for Facebook, as growth is just beginning. They still pale in comparison in dollar terms. Over the past four quarters, Asia and rest-of-world revenues combined were $736 million -- a little more than a third of U.S. and Canada revenue. These segments put up growth of 90% and 85% last quarter.

Advertising rival Google breaks down its geographical revenue between the U.S., U.K., and rest of world. For comparison, here's how Big G's sales are broken down. Big G's TTM revenue is still 10 times Facebook's, so there's a long way to go before the social networker catches up. Both companies generated more than half of their revenue abroad last quarter, and Facebook's has been steadily rising.

MAUs waiting to be tapped
What's even more interesting about Facebook's geographic performance is that its home-turf segment of the U.S. and Canada has the fewest MAUs, slowest MAU growth, and slowest revenue growth, yet the highest user monetization by far. Here's how Facebook's user base has grown, also broken down by geography. The MAU base within the U.S. and Canada represents just a fifth of Facebook's total 901 million worldwide MAUs, yet it contributed more than half of revenue over the past four quarters. The company's average revenue per user, or ARPU, in other parts of the world lag significantly compared with the U.S. and Canada, showing that Facebook has a lot of work cut out for it with converting all that MAU growth into dollars. I see this as further evidence of how much international opportunity Facebook has. Even before factoring in MAU growth, more effective monetization and rising ARPU within those segments could also substantially boost the top line. Facebook doesn't provide any specific reasons why its ARPU in other segments is so much lower, but clearly it needs to start by improving ad sales.

One of the primary reasons Facebook tracks "likes" and comments is to serve as a proxy for user engagement, which it subsequently uses when selling ads. There were an average of 3.2 billion "likes" and comments per day in the first quarter, up sequentially from 2.7 billion in the fourth quarter. Facebook doesn't break this metric down by geography, but I'd be particularly interested to see this by segment. It could possibly be a contributing factor to weaker monetization if Facebookers in other parts of the world simply aren't as engaged, while stateside Facebooking is effectively now a national pastime.

World domination
Facebook is trying its darnedest to conquer the world by expanding into international markets. It's far from the only one, though, and our senior technology analyst has identified another opportunity in social networking that he thinks holds even more promise than Facebook, and he just detailed in a brand-new research report. If you want to see which stock he thinks could end up leaving Facebook in the dust, grab your free copy today.