We Apple bulls were sure enjoying our time in the sun in the first quarter. Despite seeing the broader market put up the best first-quarter performance since 1998, shares of the Mac maker still handily trounced both the S&P 500 and the Nasdaq Composite by rallying a jaw-dropping 45.8%. I'm leaving out the Dow because -- well, frankly, because it's stupid.

It was the best of times
Apple outperformed the S&P by 35.5% and the Nasdaq by 29.1%. The first-quarter earnings report was the stuff that investors dream of: Sales soared 73%, gross margin expanded by more than 6%, and net income more than doubled. Apple launched its third-generation iPad with 3 million unit sales and announced the initiation of a dividend. Times were good. 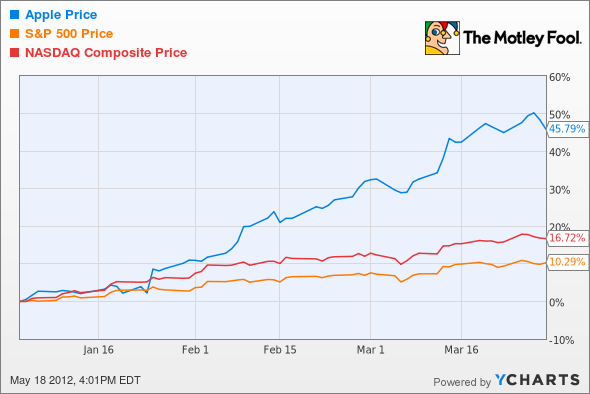 It was the worst of times
Even as the second quarter kicked off, shares proceeded to reach an all-time high of $644 in early April. Then the Apple bears took over the driver's seat. We're now about halfway through the second quarter. 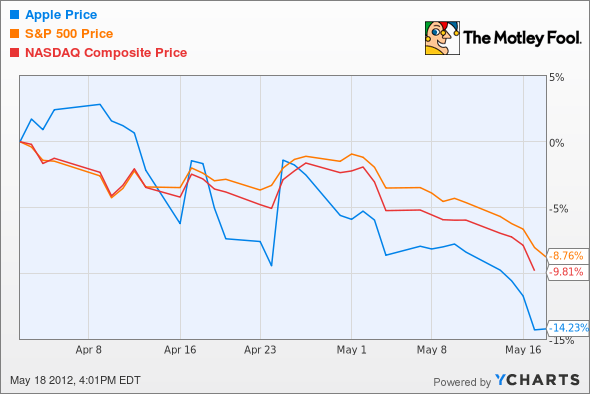 So far this quarter, shares have underperformed the broader market and given up some of the prior quarter's gains. After topping out at $644, there was a prevailing sentiment that Apple might miss on iPhone unit sales, largely spawned from data coming out of domestic carriers AT&T and Verizon , which put up ominous sequential drops in iPhone activations.

There was also concern that Qualcomm's 28-nanometer supply constraints could hold back the next-generation iPhone because of Apple's use of Qualcomm basebands. There wouldn't be any immediate effect, though, since Apple doesn't currently use 28-nanometer parts.

Yup, looks cheaper to me. Since then, shares have now given back all of those gains and then some, making Apple even cheaper.

Fact: Apple is cheap
The low on Friday was $528.66 (which is actually pretty darn close to the $527 that one technical analyst predicted), or more than $115 below the high. That's an 18% pullback, which turns into about $107 billion in market cap lost.

Analysts expect next year's earnings to come in at $53.90 per share (and how often does Apple smash their collective best guesses?). So Apple is now trading around 7.6 times fiscal 2013's projected earnings ex-cash.

In comparison, the broader S&P 500 is trading at about 20.8 times earnings, and remember that Apple is the one driving a disproportionate amount of that earnings growth in the first place. Multiple analysts were out last month with gloomy calculations of what the S&P 500's earnings growth would look like if Apple didn't exist. For example, Ned Davis Research's Dan Sanborn's figures showed the market's earnings growth shrinks from 7.8% to just 2.7% without iEarnings.

That means that one of the biggest drivers of earnings growth in the market is currently cheaper than the market itself.

Sticks and stones may break my bones, but words can cost shareholders billions of dollars
The only explanation is that the bears don't think Apple's growth is sustainable. Some of the recent negative sentiment may be related to comments from bond fund guru Jeffrey Gundlach, who had some bearish comments at the Ira Sohn Conference in New York last week. Gundlach recommends shorting Apple and going long natural gas, saying that trade has "monster legs."

He doubts that people will line up around the block for the "iPad 87." Fortunately, that's 84 iPads away, and at one iPad update per year, Apple has plenty of time before it needs to cross that bridge.

In the Greenlight corner of this match we had equity hedge fund master David Einhorn, who backed Cupertino by saying:

I can't find any prohibitions on $1 trillion market caps. I think the concern shows a fundamental misunderstanding of Apple because it assumes it is a hardware company. It's a software company. A consumer with one Apple product tends to want more Apple products. Once that happens, Apple has captured the customer.

Looks like Gundlach is having his way as shares remain weak. I'd trust an equities guy over a bond guy when I'm looking at equities, but I guess that's just me.

Some people think investors were rotating dollars out of Apple and into the Facebook IPO. However, our senior technology analyst explains more of why Apple's so attractive in our new premium research report. Past that, Forget Facebook -- Here's the Tech IPO You Should Be Buying in social media. We're talking about a company that has much more stable monetization in social networking. Grab a free copy of the report to read more.