Shares of Electronic Arts hit a 52-week low today. Let's look at how it got here and whether clouds are ahead.

How it got here
The last year has lacked the splash that video game makers need to impress the market, causing the stock to take a slow dive downward. Consoles are aging and customers are moving to new gaming platforms like tablets and PCs for their gaming experience. This has put a damper on the stock, but there are some good signs in EA's strategy.

Digital revenue has been a big bright spot for EA, leveraging the company's games on new platforms like tablets and smartphones. Revenue from these sources has grown from $570 million in fiscal 2010 to $1.2 billion in fiscal 2012. Over the last three years, digital has grown 30% per year while industry and console businesses have grown 2% and shrank 7% respectively. EA has been one of the top game producers for smartphones and tablets, something that should help the company long-term. For now, everyone is suffering from a lack of excitement in the gaming space. 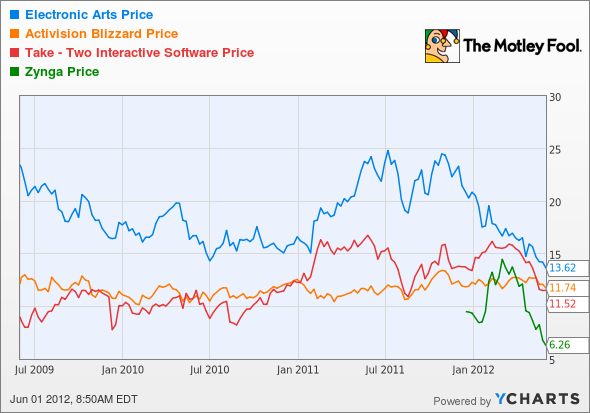 The lack of a real blockbuster has hurt EA and Take-Two Interactive from an operational standpoint as well, as both fall behind the larger Activision Blizzard . In the social gaming space, Zynga has struggled to make money after its recent IPO, as you can see in its negative profit margin below.

As happens all too often, EA hasn't helped itself by wasting money on buybacks as well. The company completed a $529 million repurchase program in April and now shares are reaching new lows. Somewhere, fellow Fool Morgan Housel is shaking his head in disappointment.

What's next?
Growth in the digital space has kept EA in front of the gaming industry, but I question how profitable this will be long-term. A sale of EA games on the iPad this weekend got me into some new titles, but I was paying $0.99 to $2.99 for titles that would cost 20 times that on a console.

It is this move into lower-cost games that will keep me from buying the new low. Hardcore gamers will still be willing to shell out $50 for a game when new consoles come out and games are refreshed, but the average consumer has gotten used to paying less than $5 for Cut the Rope or Angry Birds. EA will capture a lot of these consumers with Tiger Woods Golf, FIFA Soccer, and other popular titles, but it could put a big dent in sales.

CAPS members have a ho-hum feeling as well, giving the stock a three-star rating. Like gamers, they may just be waiting for the next big game before jumping in.

Buying this low is speculative at best. EA should remain profitable, but there are so many question marks facing the industry that I'm more comfortable on the sidelines.

Interested in reading more about Electronic Arts? Click here to add it to My Watchlist, which will find all of our Foolish analysis on this stock.