A low-cost business model, millions of independent sales representatives, and tons of emerging-market exposure haven't been enough for door-to-door retailer Avon Products . The beauty, fashion, and home products retailer's stock price has suffered severely during the past several months. Let's examine three main reasons this company is in a worrisome position.

Losing sales reps
Even though Avon has substantial emerging-market growth potential, its number of independent representatives is declining in many key markets. Although revenues from Latin America grew 12% in 2010 and 11% in 2011, operating margins declined both years. With more than 45% of Avon's revenues coming from Latin America already, it may be difficult for this geographic segment to pick up the slack of lost independent reps in almost every other market worldwide.

Unsustainable dividend
Avon currently pays a generous 5.7% yield, representing a 101% payout ratio. This means that the dividend Avon pays its shareholders is greater than the company earnings per share, which puts into question the sustainability of Avon's hefty dividend over time. The company's five-year average dividend yield is 3.2%. So while profit margins have been shrinking, the company has continued to substantially increase its dividend payout. The stock price has declined nearly 58% during the past five years.

Stacked up against its competitors, Avon's stock price has not fared well during the past year; it lost a walloping 37%. Herbalife and Revlon have declined nearly 12% and 16%, respectively. Meanwhile, Blyth has enjoyed a 43% run-up in its stock price. 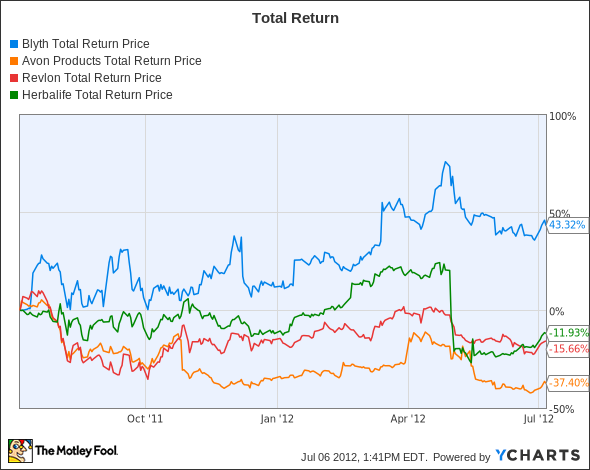 Avon, founded in 1866 and headquartered in New York City, named former Johnson & Johnson executive Sherilyn McCoy as its new chief executive three months ago. Focused on Avon's strong Latin American presence, fragrance maker Coty made a generous offer to buy out Avon in mid May. But the financial backing of Warren Buffett's Berkshire Hathaway and the brand promotion of Beyonce and JLo wasn't enough for Avon to nibble.

Avon is now embroiled in lawsuits claiming it wasn't acting in shareholders' best interests by rejecting the deal. Avon stock has dropped 21% since Coty withdrew its offer. The S&P Retail Index has increased 1% during this time. Meanwhile, Coty filed to go public on June 29.

But we Foolish investors give credit where it's due. Despite my bearish case so far, I think Avon has two things going for it:

Foolish bottom line
Before jumping on the Avon bandwagon, consider its declining number of reps in almost every geographic market, likely unsustainable dividend, and shrinking margins. You can pretty Avon up with a fresh coat of lipstick, but it still isn't attractive enough for me to add its stock to my portfolio. But don't take my word for it -- do your own research.

If you're on the hunt for stocks with expanding global presence, check out the one stock our analysts are so excited about they've dubbed it  "The Motley Fool's Top Stock for 2012." This company boasts ample emerging-market exposure with lots of growth potential. This report won't be available forever, so get your free copy today.