Shares of Cummins collapsed Tuesday on news that the engine maker was cutting its revenue projection by 10%, back down to 2011 levels. The company threw a bone to shareholders in the form of a 25% dividend increase, but that consolation was largely ignored. The stock dropped 9% Tuesday and another 4% Wednesday, more than the sales projection cut for this year. Analysts likely scaled back their cash flow projections for future years, but the drop seems overdone. This is a nearly 100-year-old company operating in a cyclical business with worldwide brand recognition. A bet on Cummins is a long-term bet; like any company riding the waves of the business cycle there will be slow years, but this is still a healthy company. The long-term thesis hasn't changed.

Slowing growth in the global economy is to blame, according to Cummins' press release, in particular Brazil, China, and India; it also cited the appreciating U.S. dollar for its top-line cut.

The market's making a mistake here by ignoring the dividend hike. While it may seem like the company's trying to disguise the bitter medicine of the guidance cut, Cummins is letting shareholders know that there is plenty of room for future dividend increases, and there's no reason for investors to flee. In fact, after the drop in share price over the last few months and the dividend jump, the yield has nearly doubled in just a few months from as low as 1.2% in March to 2.3% currently.

The dividend increase puts it more in line with peers like Deere and Caterpillar , which pay a 2.4% and 2.6% yield, respectively. As the chart below shows, Cummins' dividend payout ratio lagged measurably behind the two other manufacturers before the increase.

Cummins has generated around $2 billion in free cash flow over the last three years, so it looks like there could be plenty more capital waiting to be returned to shareholders. Despite the tough economy in recent years, operations have improved as profit margin has consistently increased and revenue has more than tripled in the last 10 years. 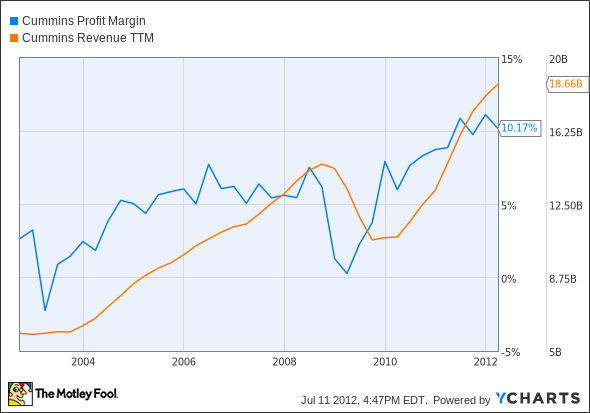 Notice the dip in revenue during the financial crisis. I see the current setback in much the same way -- just a temporary obstacle on the road to future growth. At prices near 21-month lows, Cummins is a tempting buy. It's got more room for dividend growth, a strong position in the natural gas fueling sector, and as a cyclical company it should bounce back when the economy awakens from its slumber.

Our experts have found one more reason to like Cummins. They have chosen it as one of four stocks that could jump after the presidential election because of its advances in low-emissions technology that make it a winner in any new clean-energy policy. You can find out what the other three stocks are and what the political parties like about them in our new special free report: "These Stocks Could Skyrocket After the 2012 Presidential Election." You can get your copy now by clicking right here.