Shares of NextEra Energy hit a 52-week high on Friday. Let's take a look at how it got there and see if clear skies are still in the forecast.

How it got here
Renewable energy might be a pipedream for a lot of energy companies at the moment, but NextEra Energy is making that dream a reality.

NextEra's advantages and disadvantages are one and the same -- namely, its clean technologies. NextEra has the largest fleet of wind power generation in the U.S., generating 8,569 MW of electricity from wind in 2011, and has plans to increase that total output by 1200 MW in 2012. It's also a pioneer in solar production, with plans to introduce 900 MW of solar-powered electricity between 2012 and 2016. These green energy sources allow NextEra the advantage of offering its customers significantly lower energy rates. And, as we very well know, low rates equal a happy customer.

On the flipside, the huge costs associated with transforming coal-powered facilities into ones capable of running on natural gas, maintaining nuclear facilities, and building out its wind and solar farms are a big bottom-line drag. If it weren't for NextEra's strong cash flow generation, I'd be raising the caution flag over the company's $24.3 billion in debt. Also, with nuclear power costing significantly more than other fuel sources at present, the company's five nuclear plants are another detractor on profits.

How it stacks up
Let's see how NextEra Energy stacks up to its peers: 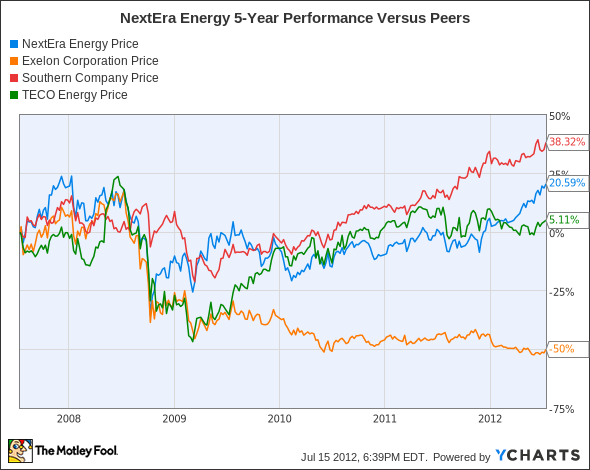 In spite of weak home prices and employment figures in the Southeastern U.S., electric utilities in the region, including Southern Co. , NextEra Energy, and TECO Energy , have held up rather well.

All four electric utilities pay handsome dividends, but each comes with its own set of risks.

For NextEra, as I alluded earlier, the risks are associated with accumulating large amounts of debt. For Exelon, the largest nuclear power generator in the U.S., it's that nuclear prices remain vastly higher than other forms of energy which will reduce its importance as time passes. Southern Co. also has a large nuclear presence and is considerably pricier than many of its nuclear plant operating peers. Finally, TECO finds itself at the mercy of an unforgiving Florida job market, unpredictable weather patterns, and weak coal pricing which weighs down its additional underground coal mine operations.

I've sounded off positively on Exelon more than once while taking an unpopular negative stance on Southern Co. last month.

What's next
Now for the $64,000 question: What's next for NextEra Energy? That question depends on how seamlessly it integrates its clean technologies into the fold, whether it can keep its debt levels under control, and if it continues to provide shareholders with the same steady dividend growth they've been privy to since 1994.

Our very own CAPS community gives the company a highly coveted five-star rating, with a whopping 97.2% of members expecting it to outperform. Personally, I've yet to make a CAPScall on NextEra in either direction, but today I am willing to place a CAPS limit order of outperform if NextEra makes it back to $60.

"Why not buy now?" you may ask. Simply put, I'm concerned with the huge investments its Florida Light & Power division is making. Most of its renewable energy projects are under contract, so they're not a big concern; however, big natural gas investments have the potential to create an earnings hiccup or two in the very near term. Over the long term, NextEra is on pace to spearhead cheaper energy prices for its customers and will be a leading renewable energy provider for decades (assuming it prudently controls its debt levels). Assuming it retraces a bit from its highs, I'd be willing to bet that NextEra's green energy initiatives will provide your portfolio with some green of its own in the future.

If you love high dividend yields and are excited by the idea of building your nest egg by reinvesting your returns, and would like the inside scoop on three more companies that could help you retire rich through healthy dividends and future growth alike, then click here for access to our latest free special report.

Craving more input on NextEra Energy? Start by adding it to your free and personalized watchlist. It's a free service from The Motley Fool to keep you up to date on the stocks you care about most.

Can This Leading Clean Energy Producer Show You the Green? @themotleyfool #stocks $NEE $SO $EXC $DUK Next Article
Current