Door-to-door retailer Avon Products has suffered a dismal 2012. Not even a low-cost business model, millions of sales reps, and huge emerging-market exposure has been enough to keep the beauty, fashion, and home products retailer's stock afloat. Let's take a look at where Avon's been and what to expect for the remainder of the year.

Where Avon's been
Fragrance maker Coty made a generous offer to buy out Avon in mid-May. But the financial backing of Warren Buffett's Berkshire Hathaway and the brand promotion of beauty Beyonce wasn't adequate to get Avon management to nibble. Avon is currently embroiled in lawsuits claiming it wasn't acting in shareholders' best interests by rejecting the deal. Since Coty withdrew its offer, Avon stock has dropped nearly 30%. The S&P Retail Index has been flat during this time.

Even though Avon has substantial emerging-market growth potential, its number of independent representatives is declining in every market except Latin America, South Africa, and Turkey. Avon's already-thin profit margins have declined more than 25% in the past two years. Avon's selling, general, and administrative expenses outpace total revenue, and operating margins have declined significantly during the past several years, including a 23% reduction last year.

Avon's debt-to-equity ratio is magnitudes higher than that of Herbalife and Nu Skin. Ulta has no long-term debt on its balance sheet. Avon's dividend payout ratio is more than 100%, meaning Avon pays its shareholders dividends that are greater than the company's earnings. Both Herbalife and Nu Skin pay modest dividends, yet at ratios that are not only sustainable but also offer the companies room to grow their dividends in the future. 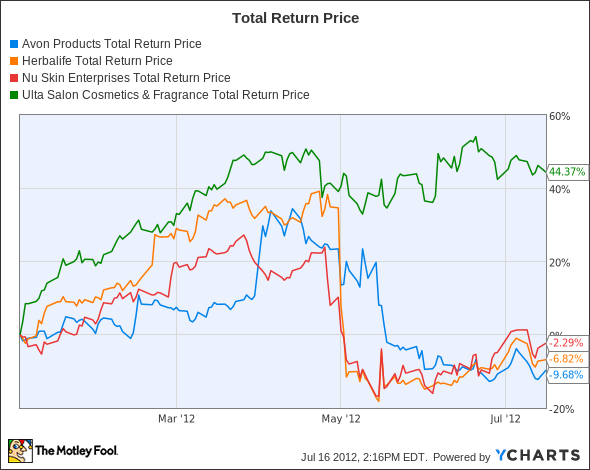 With the highest debt-to-equity ratio among its competitors, Avon's stock lost nearly 10% so far this year. Herbalife and Nu Skin have lost nearly 7% and roughly 2%, respectively, during this same time. Meanwhile, Ulta Salon has enjoyed a stellar 44% run-up in its stock price.

What to expect
If you're holding on to Avon for the dividend, consider this your warning. The company's five-year average dividend yield is 3.2%. So while profit margins have been shrinking, the company has continued to substantially increase its dividend payout. Expect increased risk of the company slashing its dividend.

With more than 45% of Avon's revenues derived from Latin America already, it may be difficult for this geographic segment to pick up the slack of lost reps in nearly every other market worldwide. Expect global economic weakness and lower growth prospects in Brazil, Avon's largest market, to negatively impact the company.

Rumors have surfaced that Avon may buy Obagi Medical Products . But while Obagi enjoyed a 65% run-up in its stock price so far this year and boasts a decent balance sheet with virtually no long-term debt, its $320 million market cap would amount to a tiny drop in Avon's $6.8 billion bucket.

While Coty has stepped aside, other potential buyers have shown interest. Despite that, expect Avon to go it alone. Its turnaround -- assuming there will be one -- could take years.

While Avon may not be an attractive stock right now, lots of good-looking ones exist. For starters, check out the one stock our analysts are so excited about they've dubbed it "The Motley Fool's Top Stock for 2012." This company boasts ample emerging-market exposure with tons of growth potential. This report won't be available forever, so get your free copy today.