Corning shareholders probably should have seen this coming.

When Apple bombs on weak iPhone sales, it becomes almost an act of faith to expect a great quarter from one of its key component suppliers. You might argue that Apple is only one big fish in Corning's pond, but diversified mobile chip maker Qualcomm recently reduced its full-year guidance as well. Add in the well-known self-cannibalism of Corning's most profitable segment by desperate TV manufacturers, and you have all the ingredients for a weak quarter.

Revenues missed the Street's expectations by $110 million, and earnings per share were $0.02 shy of consensus estimates. Let's take a closer look at Corning's most recent report to find out if this is the sign of extended weakness to come, or if the trend might be reversible.

What the numbers tell you
Corning's continued weakness can be blamed largely on its display technologies segment, which has been its cash cow for years. You can see how important this segment is to Corning's bottom line in the virtual debate I had with my Foolish colleagues Travis Hoium and Sean Williams earlier this month.

Let's take a look at how display technologies has twisted the knife over the past year:

When display technologies falls, Corning falls. Over the past few quarters, the trend has been unmistakable: Corning seems to have stalled out since late 2010, and its net income has trended lower ever since. A note for anyone confused by the high levels of net income relative to gross profit -- Corning includes the profits generated by its jointly owned LCD glass subsidiary Samsung Corning Precision Materials in display technologies. Free cash flow, a more accurate representation of the company's efforts, has declined markedly since the fourth quarter of 2011 -- but it wasn't particularly strong last year, either.

Corning's other four notable segments (and its grab bag of miscellaneous revenue) were considerably less profitable than display technologies:

The Gorilla Glass-centric specialty materials segment is starting to become one of Corning's more profitable segments, but it's still a long way from replacing display technologies as the company's crown jewel. If your investing thesis for Corning hinges on "more Gorilla Glass in everything," a modest 3% sequential and 5% year-over-year improvement in specialty materials sales seems to argue otherwise, at least in the near term.

Looking ahead
Corning's earnings call was, to put it mildly, underwhelming. Here's what CFO James Flaws had to say about the company's forward strategy in yesterday's conference call, with some emphases added on my part:

"Form bottom" is our mandate into display business. The phrase conveys the need to stabilize earnings and position ourselves to regain positive momentum. The critical first step is to return to moderate quarterly price declines for LCD glass. Today, I'm delighted to tell you that our quarter two price declines for LCD glass were indeed much more moderate than the previous two quarters' average. And just as important, we now believe price declines in quarter three will also be moderate. Now we need to continue to repeat this over the coming quarters while we execute our cost reduction projects.

Yippee! Price declines were more moderate than the past two quarters! This calls for a celebration. It probably won't be a very expensive one, since those Corning shares have already lost a third of their value over the last year. But at least further price declines will be moderate. That's reassuring (not really).

Now that we've got that out of our systems, let's see what's on the agenda for those other, less woebegone aspects of Corning's business. Flaws claimed that the second quarter "is the lowest quarter of retail all year long, so we always expect and experience inventory builds. The key is not to build too much." Corning's had inventory issues beyond just the second quarter of previous years. Inventory levels remain quite high, but there were signs that the company is addressing the issue: 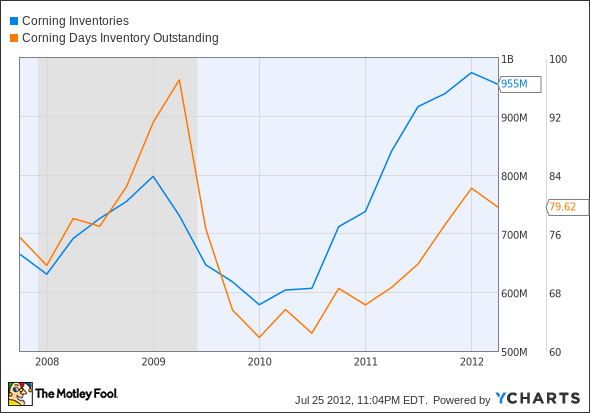 Corning expects the next quarter to bring greater demand, and has manufacturing capacity coming on line to handle it, but the company and its subsidiary both continue to operate with excess capacity.

Specialty materials was the only segment to get an unequivocal thumbs-up for the third quarter, again on the strength of mobile device demand. That's not likely to offset a further display tech decline, and it's unlikely that any moderate growth in other segments will combine to offset further "moderate price declines" for LCD screens. Shifting away from TV glass to cover mobile devices may one day turn this ship around, but that day isn't here yet.

Corning may not be the best stock to ensure your retirement today, but there are plenty of alternatives. The Motley Fool's picked out three great long-term stocks that will help you retire rich, and they're all covered in our free report. It's available for a limited time, so claim your free copy now while they last.

There are ways to keep ahead of the game, though. Our analysts have put together an all-new premium research report on Apple. You owe it to yourself to get all the information you can, whether you think Apple will reign or be ruined. Click here to visit our store and find out more.