Shares of Cliffs Natural Resources hit a 52-week low yesterday. Let's take a look at how it got here to find out whether there are still cloudy skies ahead.

How it got here
Coal. Steel. Bad.

That's your three-word overview of Cliffs' problems. Thanks for coming, see you next time!

Still here? I hope so. Cliffs has seen demand headwinds for some time in its iron ore business, and the smelting process that requires its metallurgical coal has taken a similar hit as a result. This two-for-one smackdown has been ongoing in both the coal and iron ore industries since early 2011, as my colleague Sean Williams noted last month when he discussed Cliffs' earlier 52-week low.

A quick glance at both metallurgical coal producers like Walter Energy -- which has had an abysmal 2012 thanks to weak demand and weaker coal prices -- and iron ore miners like Vale shows just how complete the carnage has been over the past year: 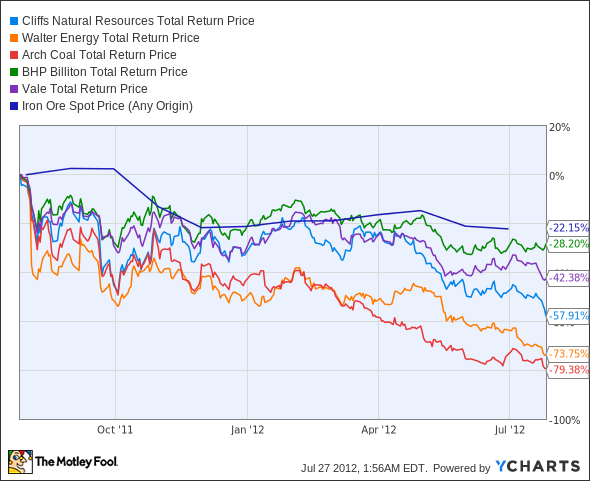 Iron ore prices have slid quite a bit over the past year, despite the fact that steel production isn't much changed from that point. China, in particular, reportedly reached all-time highs in crude steel production this year. However, if that steel isn't being used due to construction or manufacturing slowdowns, then there's no reason why either it or its base materials should retain their prices. Vale is particularly susceptible to a Chinese slowdown, as Fool contributor Dan Caplinger recently pointed out. Cliffs is hardly immune though, due to the global nature of commodity prices.

One of Cliffs' biggest customers is ArcelorMittal , a company whose business is largely driven (pardon the pun) by automotive steel. As Fool contributor Keith Speights notes in his Cliffs bull pitch, future automotive sales will be a major part of both ArcelorMittal's and Cliffs' growth. That makes monthly auto sales a useful secondary data point for Cliffs' shareholders.

The price of metallurgical coal also has declined a fair bit since 2011's third quarter. The latest available price per short ton, from the first quarter of this year, was 16% lower than its high six months ago. It's likely that this price will be reported lower for the second quarter, but even flat prices aren't likely to start a major turnaround.

What you need to know
We've seen the bird's-eye view of Cliffs' conundrum. Let's take a closer look at the particulars:

Keep in mind that 2009 was a low point for many companies. However, Cliffs bounced back better than its peers, despite the fact that its bottom line has been in decline for a few quarters now: 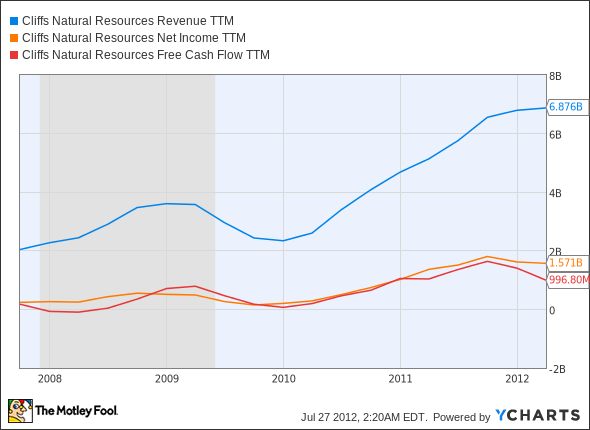 Free cash flow has also been on the decline, but Cliffs sports a better price to free cash flow ratio than any of its peers -- particularly Arch Coal, which failed to generate positive cash flow at all over its four most recent quarters.

What's next?
Cliffs might have gone over a cliff, but its long-term prospects aren't likely to be terminal. At such ridiculously low valuations, it may be the single best stock in this sector -- but that means little if the entire sector continues to suffer.

The Motley Fool's CAPS community has given Cliffs a four-star rating, with a whopping 96% of our CAPS players expecting the company to break out of its slump in the near future.

Interested in tracking this stock as it continues on its path? Add Cliffs to your Watchlist now, for all the news we Fools can find, delivered to your inbox as it happens. If you're still on the hunt for a dividend stalwart that can survive and thrive in any investing climate, we've got one for you. Actually, make that nine -- as in "Nine Rock-Solid Dividend Stocks to Secure Your Future." They're all discussed in our most popular free report, so claim your free copy now to start building a secure investing foundation.