These five stocks have solid yields with plenty of room to run.

As investors, we all love our dividends. But what's even better? Dividends that grow, and grow consistently over the long term.

And while dividend investors should of course pay attention to the current yield on a stock to assess its growth potential, investors should also look at the current payout ratio from retained earnings, the ability of a business to increase its earnings per share over time, and management's capital allocation policies. All of these factors will determine the overall health of the business and, by default, the health of the dividend.

If you're looking for solid dividend stocks to buy and hold for the long term, here are five in five different industries that could double their payouts in the years ahead. 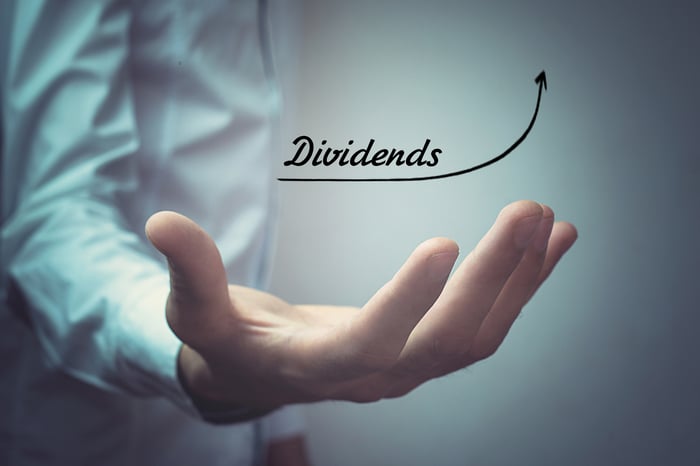 This diversified portfolio is paramount for Oshkosh, as the purchase of heavy equipment can be a tad cyclical. Currently, investors are fearful about a slowdown in the company's access equipment segment, which makes up about half of Oshkosh's sales. This is due not only to macroeconomic concerns, but following the very strong recent years of access vehicle sales, the current fleet is relatively new, and thus appetite for upgrades may be muted next year.

Currently, however, the rest of Oshkosh's business appears relatively consistent and strong. In addition, management has a great long-term track record, and the company was recently awarded the Glassdoor "Best Places to Work" prize for 2019.

That doesn't seem like a company that should trade at only 9.3 times earnings. Fortunately, Oshkosh's management is taking advantage, targeting $350 million in share repurchases this year. Oshkosh has lowered its overall share count by about 6% over the past 12 months, and it looks as though these ample cash returns will continue. More share repurchases in the quarters and years ahead mean a lower share count, and thus more room to increase Oshkosh's dividend, which makes up only 13% of earnings.

While you may not think of Starbucks (SBUX -0.62%) as a traditional dividend stock, it has become one over the past two years. As part of a recent business simplification initiative, the company sold off all of its businesses outside of the U.S. and China. That included selling its packaged goods business to Nestle, which brought in a cool $7.1 billion, and the noncore-owned stores to master franchisees.

After divesting these assets, Starbucks plowed the money into large share repurchases, then increased its dividend by 20% in 2017, with another 20% hike in 2018. And yet, I still think Starbucks' dividend can double in the next decade, despite these recent hikes.

The company has historically raised its dividend around November, or the time of its fourth-fiscal-quarter earnings call, so investors are due for another increase fairly soon. And although the company isn't growing like it was in the previous decade, management still thinks that it can achieve a "long-term" EPS growth rate in the double digits.

Even with no increase in Starbucks' payout ratio, a 10% annual dividend increase -- in line with EPS -- would allow Starbucks' dividend to double in about seven years. While the stock isn't particularly cheap today after a great run in 2019, the company's leading brand and resilient business still make the stock a solid dividend growth pick.

Not only is Applied Materials' payout ratio just a hair over 25%, meaning that it has room to grow, but that ratio is coming during a "down" year for semiconductor equipment, which can be quite cyclical. In fact, last quarter Applied Materials' earnings per share dropped a whopping 40%. That means the company's current payout ratio based on more "normalized" earnings is likely even lower.

There's also reason to think next year will return to growth. For one, we are already well into a down cycle in the memory industry, which many analysts think is poised to turn positive in 2020. As memory demand growth returns, so do equipment purchases from Applied's customers.

In addition, all indications are that 5G buildouts are being accelerated faster than first thought, which should require more advanced chips and, therefore, more of Applied Materials' equipment. Applied also recently announced the acquisition of Kokusai Electric, a Japanese company with complementary products that Applied's management believes will be immediately accretive to earnings per share.

With Applied Materials' low current payout ratio and the long-term need for more and more advanced chips, it seems the company's dividend is poised to go nowhere but up in the years ahead.

To be honest, it was hard to choose a financial company out of the large U.S. banks because most of them are screamingly cheap at the moment and poised for dividend growth. Why did I choose JPMorgan Chase (JPM -0.88%)? Probably because of the "growth" part of the equation.

JPMorgan has the top franchise in the United States as America's largest money-center bank, but that doesn't mean it can't still grow. In fact, JPMorgan announced a major 90-branch expansion in 2019 into nine new U.S. markets, mostly in the Southeast, Midwest, and Pennsylvania.

That doesn't seem like a company that's worried about being too big to grow. And yet JPMorgan's stock trades at just 12 times earnings, despite growing its EPS by a whopping 23% last quarter, fueled by a combination of a 16% rise in net income, along with ample share repurchases.

Banks have generally been sold off this year due to fears over the yield curve, which has flattened recently and could very well crimp bank margins in the next few quarters. It could also portend an economic downturn.

However, there's no guarantee a recession will happen, and even if one does, JPMorgan has very high capital ratios, compared to 2008, which should act as a buffer. In fact, JPMorgan actually didn't need to take a government bailout in 2008, but agreed to do so in order to preserve confidence in the other banks that did need it.

JPMorgan's safety, growth profile, and leading technology investments should all help drive earnings growth in the future. When combined with share repurchases at these low prices, more dividend increases are very likely in the years ahead.

The leading U.S. pure-play iron ore miner Cleveland-Cliffs (CLF 3.98%) just became a dividend stock in the fourth quarter of 2018, when it reinstated its dividend after pulling it years ago in order to fend off potential bankruptcy.

Obviously, the company is in a much better place today. CEO Lourenco Goncalves, who took over in 2014, sold off all of Cleveland-Cliff's non-U.S. and non-iron ore mines that were acquired by previous management, then paid down debt and doubled down on the company's core U.S. properties.

That helped shore up the company's balance sheet, and Cleveland now has long-term, take-or-pay contracts with big U.S. steelmakers, which should keep the company profitable in most parts of the cycle and have manageable losses (or even no losses) in the event of a severe downturn.

While Cleveland-Cliffs is actually benefiting from tariffs that were put on Chinese imports in 2018, which pushed up U.S. steel prices, the ongoing trade war and fears of a slowdown have caused prices to fall recently. That has pushed Cleveland's share price down and its yield up to over 3%.

And yet, management not only just raised the quarterly dividend by 20%, from $0.05 to $0.06 per share, less than a year after reinstating it, but it even added an extra $0.04 per share special dividend, payable to shareholders of record Oct. 4 (ex-dividend date Oct. 2). Insiders have also been buying stock during the recent swoon, which certainly shows confidence in the face of falling steel and iron ore prices.

What has management so confident? Likely the company's new hot briquetted iron (HBI) plant it's building in Ohio, which should be completed by the first half of 2020. Once built, Cleveland-Cliffs will be able to produce a more high-end, high-margin manufactured product for newer electric arc furnace steelmakers. That should help further bolster the company's margins next year and produce consistent cash flow going forward.

At a recent industry conference, Goncalves said that once the HBI plant is completed and the company is reaping the benefits, he'll look to increase the company's dividend, or perhaps even initiate more special dividends, as he doesn't anticipate building any more multi-hundred-million-dollar plants after the Ohio one is done. Such shareholder-friendly actions should be music to investors' ears.

Déjà vu All Over Again: The 55 Greatest Wall Street Apologies of the Past 15 Years

Macey: Why The London Whale Scandal Was Blown Out of Proportion