The task is made even harder when CEOs are compared across other companies and industries. Who's to say, for example, whether Steve Jobs of Apple was a better or worse leader and visionary than Jeff Bezos of Amazon.com? Both founded and led companies that provide great products and services to their customers as well as market-smashing returns for shareholders.

Fortunately, a new service provided by Chiefist.com does the work for us. "Many of the annual exec rankings focus almost exclusively on share price improvement or some other concept of total return to shareholders," says the company's website. "While we like making a buck from our stocks as much as the next person, the notion of measuring executive performance based solely on the company's stock price pop over a 365-day period strikes us as simplistic and incomplete."

What follows is Chiefist's current list of the 10 worst small-cap CEOs since the middle of 2010, presented in descending order (like golf, a lower score is better).

As you can see, this list contains CEOs from a variety of companies and industries. To mention a few:

Despite their differences, however, the one thing these companies have in common is horrible share price performance. As you can see below, the broader market has handily outperformed all of them since this time two years ago. 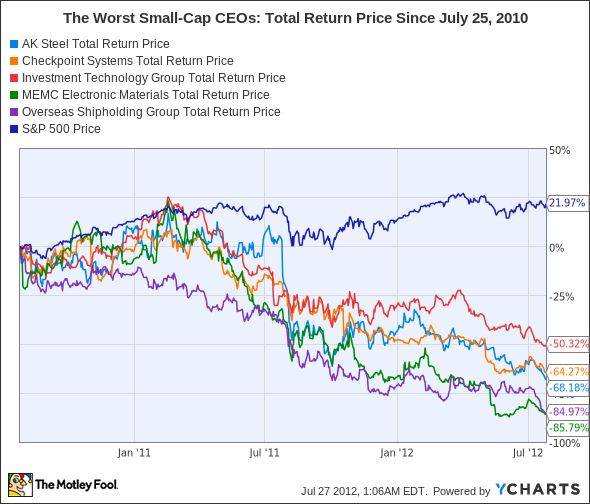 Foolish bottom line
Whether you use metrics like this to gauge a CEO's value or not, it's always important to trust the people leading the companies you're invested in. And it's for this reason, that I invite you to view one of our newest free reports about three stocks that will help you retire rich. Of the stocks recommended, two of them are arguably led by the best CEOs alive today. To view this free report, click here now.

Meanwhile, if Steve Jobs' legacy is important to you, read our premium report on Apple. You'll get the best from our top tech analyst on Apple's future prospects and challenges, along with free updates for an entire year.
This article represents the opinion of the writer, who may disagree with the “official” recommendation position of a Motley Fool premium advisory service. We’re motley! Questioning an investing thesis -- even one of our own -- helps us all think critically about investing and make decisions that help us become smarter, happier, and richer.