Shares of both Coca-Cola and Pepsi hit a new 52-week high today. Let's look at how it got here and see whether clear skies are ahead.

How it got here
Who says the consumer is dead? Coke and Pepsi are reaching new highs on demand from consumers, and their consumer-goods brethren are going strong as well. Pepsi recently reported a 7% growth in organic revenue in PepsiCo Americas, and Coca-Cola reported better-than-expected 2.7% growth overall. This isn't an earth-shattering level of growth, but it appears that consumers aren't holding back on spending the way they were a few years ago.

Pepsi and Coke aren't the only ones benefiting from a stronger consumer. Procter & Gamble and Kraft Foods are also near 52-week highs as their businesses strengthen on the backs of consumers. 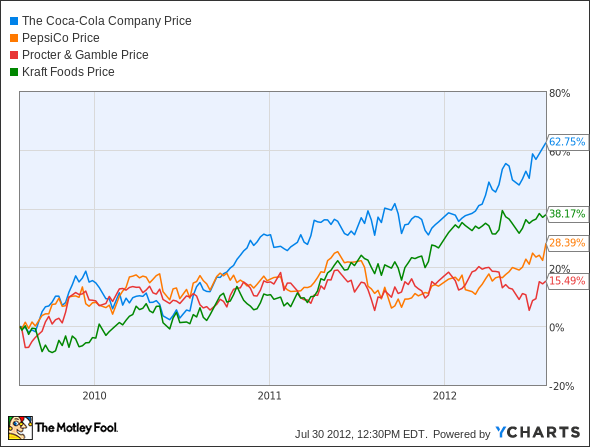 As I said, revenue isn't growing quickly, but the companies have performed well because they've been able to control costs and they're relatively safe bets in the current environment.

The great thing about these companies is that they provide goods that people will buy in good times and in bad. So when the market is worried about economic growth, these stocks will benefit because they're relatively safe. But if the overall economy improves, their results will improve, which should help their stocks.

What's next?
Now the million-dollar question is whether soda makers can continue to move higher.

Both Pepsi and Coca-Cola sport fairly high earnings multiples, and growth doesn't indicate that they're worth a multiple that high. If there's anything that holds these stocks back, it's that their earnings multiples are just too high.

Our CAPS community thinks both stocks can rise higher, giving Pepsi and Coke our top five-star rating. I think both can continue to move higher, but it'll be a slow and steady pace, and double-digit returns in the next year might be a stretch.

Interested in reading more about soda makers? Add Coca-Cola and PepsiCo to My Watchlist. My Watchlist will find all of our Foolish analysis on every stock you add to your personalized list.