Let the record show that nutritional-supplement marketer Herbalife one-upped David Einhorn's Greenlight Capital. In a July 23 letter to investors, Einhorn stated that his hedge fund lost 3.2% in the most recent quarter. Herbalife, on the other hand, just announced a record second quarter, with earnings up 25% over last year. The company also raised guidance for the year.

Herbalife looks like a good pick for investors. Here's why.

The impact of three questions
Let's first go back a few months in time. Herbalife released glowing quarterly results in April, too. Earnings were up 24% compared to the prior year. Things looked pretty good -- until the earnings conference call the next day.

David Einhorn participated on the call. He essentially asked only three questions. The first related to the percentage of sales for outside consumers versus the amount consumed by distributors. The second question pertained to the incentives for supervisors to sign up distributors. Einhorn's final question was about a distributor classification breakdown that was reported in the past but not included in the quarterly report.

The markets apparently assumed that Einhorn was preparing to short Herbalife. The stock sank more than 20% after his questions were posed. 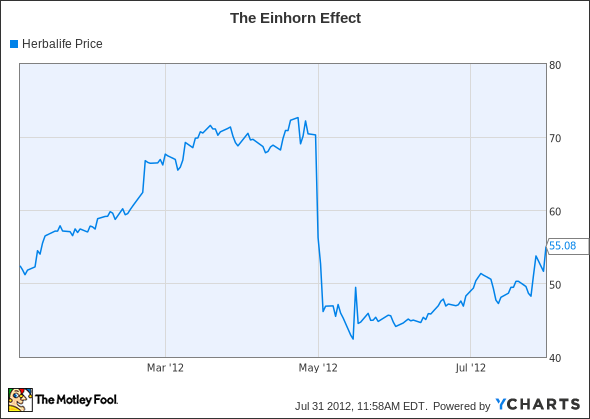 Surprisingly, Einhorn didn't follow up on his conference call questions with an attack on Herbalife. However, short-sellers emboldened by Einhorn's questions smelled blood in the water. Many people are still scratching their heads over Einhorn's comments. His hedge fund hasn't declared any positions in the stock thus far. Einhorn's underlying motivations for stirring things up remain unknown. Regardless, his comments caused around $2 billion of market cap to quickly disappear.

Fighting back
Herbalife's management took the best course of action available. First, they publicly responded to Einhorn's questions, noting that they were "elementary questions usually asked by investors new to our industry."

Third, and most importantly, the company delivered great operating results in the most recent quarter. Herbalife hit the $1 billion mark in quarterly sales for the first time in the company's history. Every geographic region showed strong sales growth except for Europe, Middle East, and Africa, which reported flat results.

Winning weighs
While Herbalife is growing in nearly every region, China particularly looks promising. Sales in the second quarter were up 50% compared with last year -- and double the next-highest region. Herbalife received direct selling licenses for eight additional Chinese provinces in May. That positions the company to sell directly in 24 of the 29 provinces. Herbalife already has retail stores in all provinces.

Thanks to Mr. Einhorn, the stock is valued attractively. It trades at a forward P/E ratio of 12. This multiple is lower than the forward P/E of 15 for Nutrisystem , even though Herbalife has much stronger earnings growth than Nutrisystem. Herbalife's forward P/E is meaningfully higher than Weight Watchers International , which trades at a multiple of 9.5. However, Herbalife hasn't suffered from declining earnings, unlike its rival.

Also due in part to David Einhorn's influence, the number of shares outstanding is on track to decrease by nearly 8% over the coming months. This decrease will take place as the 9.2 million shares repurchased by Herbalife are retired. This buyback has the potential to juice earnings going forward.

No more questions?
I listened to Herbalife's earnings conference call, hoping David Einhorn would make another appearance. Alas, he did not. Perhaps he simply doesn't have any more questions.

Then again, he might be spending his time looking for ways to make money for his investors after losing some of it last quarter. Maybe he could buy shares in a company that is growing revenue and earnings consistently for its investors. If he has any problems with that search, I'm sure Herbalife's management team would be glad to point him in the right direction.

You might be interested in learning about the prognosis of Einhorn's former target -- Green Mountain Coffee Roasters. Check out The Motley Fool's new premium report analyzing the prospects for the company. Get your copy now, which includes a full year of exclusive analyst updates.