Clean Energy Fuels managed to beat low expectations for another quarter, with adjusted net losses of $0.16 per share coming in $0.02 better than consensus estimates from Wall Street. Clean Energy's GAAP earnings came in even better, with $11.3 million in losses amounting to a loss of $0.13 per share thanks to several accounting necessities.

The market, which has been in the habit of tossing Clean Energy and closely linked Westport Innovations wildly in both directions this past year, seemed to shrug. Clean Energy ended the day up "only" 5%, and Westport was flat. Let's take a look at what the latest results mean for Clean Energy and the nat gas fueling movement it hopes will soon kick into high gear.

What the numbers tell you
I put together a graph that shows Clean Energy's financial progress over the past few quarters, including the most recent one. A few things should stand out: For one thing, gross profit has been remarkably consistent despite fairly major moves on both top and bottom lines. That can be a good sign in times of weak revenue -- Clean Energy had been expected to post $80.1 million in revenue this quarter, but only managed $69.8 million. For another thing, Clean Energy is finally starting to push its bottom line back toward profitability. There's one easy way to figure out why that's happening, and here it is: 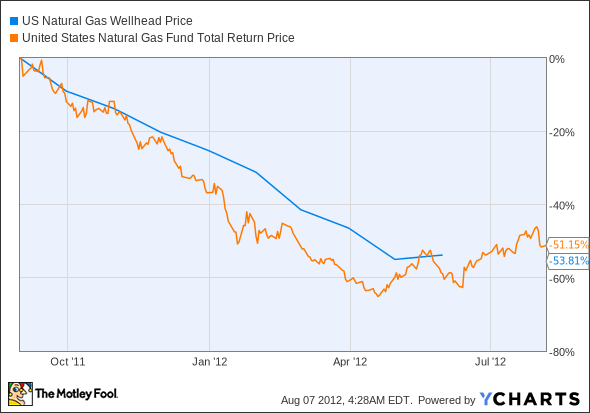 Since the start of the second quarter, the price of the United States Natural Gas Fund has risen 22%. While wellhead prices haven't been updated to reflect this rise, it's safe to say we'll see a bigger uptick when July's results come in. Clean Energy delivered 48.6 million gallons this quarter, a figure that includes different natural gas formulations, but also the fuel used to provide support services to customers. That figure's up 24% from the year-ago quarter and an 11% gain from the first quarter, which saw 43.7 million gallons delivered.

This will reflect more strongly on Clean Energy's third quarter and beyond, as product revenues this quarter are lower than they were a year ago. Service revenue increased markedly from the year-ago quarter, perhaps indicating the first fruits of Clean Energy's engine-development partnership with Navistar .

Finally, cash flow continues to be negative in a big way, and that doesn't look likely to change in the second half. Clean Energy remains committed to its fueling station buildout and the augmentation of its nat gas plants, and plans to spend another $128 million in capital expenditures for the rest of the year to achieve that goal.

Putting the pieces together
There are compelling reasons to buy Clean Energy, but there are also some big red flags. Perhaps the biggest argument on both sides concerns the cost of natural gas, and it's an argument that affects both Clean Energy and Westport in fundamental ways.

As you've seen, nat gas is still near all-time lows, but that doesn't mean it will stay there forever. A price increase is good for Clean Energy (but not Westport) in the short run, as it can help boost earnings as a result of higher pump prices, but "low-cost" nat gas may undermine Clean Energy's growth if it nears price parity with petroleum. The number of nat gas drilling rigs has declined for years, which may be the surest signal yet that a nat gas glut may be about to end.

Will Clean Energy power through this period of intense infrastructure investment and nat gas price uncertainty? The Motley Fool has its best energy analysts on the case, and they've put together a top-notch premium research report on Clean Energy's long-term potential. It's got a year of free regular updates included so you can continue your investigation with the right tools. Click here to get the information you need now.