Shares of General Electric hit a 52-week high on Monday. Let's take a look at how it got there and see if clear skies are still in the forecast.

How it got here
In an environment where earnings growth is like squeezing blood out of a turnip, General Electric's second-quarter earnings report and steady guidance are enough to propel it to a new 52-week high.

If you recall, GE's share price was sacked during the credit crisis due to poor-quality loans. Since then, it has purposefully shrunk its loan portfolio (revenue fell 8% this quarter for GE Capital) in order to rid itself of non-performing assets.

But it's not all fun and games for GE. For one, foreign currency fluctuations are hurting all U.S. companies that sell internationally. GE rival United Technologies estimated that currency movements hurt its second-quarter results by up to $800 million, helping sales to decline by nearly 5%. Also, GE Capital isn't out of the woods yet. Much like Citigroup , which recently boosted its common Tier 1 capital ratio to 12.7%, GE Capital is focused on cash generation at the expense of revenue growth, which could have a negative impact on both companies' bottom lines for years to come.

How it stacks up
Let's see how General Electric compares to its peers. 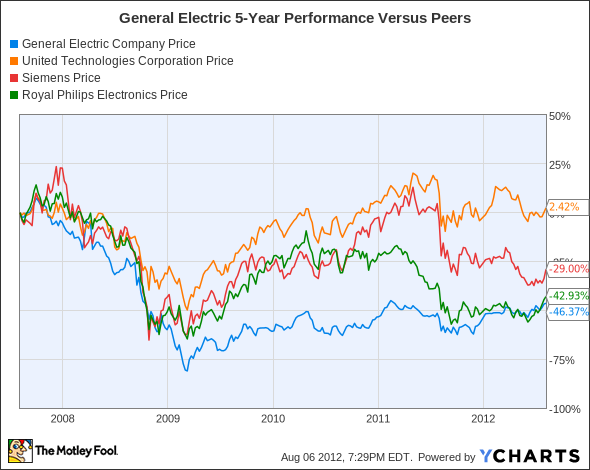 As you can see, the industrial goods sector was hammered by the recession. Only United Technologies is higher in this group, with Siemens and Koninklijke Philips Electronics (say that three times fast) still outperforming GE thanks to the dismal performance of its finance unit.

Normally we get some differentiation when we look at financial metrics, but we aren't getting much help here at all. All four companies boast fantastic yields, are trading within a stone's throw of one another in terms of forward P/E and cash flow, and are reasonably priced given macroeconomic uncertainty.

Another factor all four share in common is negative currency and sales implications due to Europe's debt crisis. In GE's latest quarter, foreign currency translation provided a negative $900 million effect on revenue, while United Technologies lost nearly $800 million in sales due to a weaker euro. Siemens, which relies on the eurozone for the vast majority of its sales, saw orders tumble 23% in its most recently ended quarter. Philips Electronics was the lone bright spot, literally, as energy-efficient light bulb sales boosted results past Wall Street's expectations. However, its CEO, Frans van Houten, warned that visibility remains very poor.

What's next
Now for the $64,000 question: What's next for General Electric? That question depends on the health of the overall economy, its ability to strengthen the capital position and loan portfolio of its GE Capital arm, and if it can maintain strong pricing power.

Our very own CAPS community gives the company a four-star rating (out of five), with 93.7% of members expecting it to outperform. You may feel free to count me among the 15,000-plus members that have made a CAPScall of outperform on GE. My personal call is up 19 points since inception.

General Electric was once a great company that seemed infallible, but as we humbly learned, that's just not the case with any stock. GE has, though, made solid efforts to clean up GE Capital's portfolio, has stuck to its guns about double-digit EPS growth in 2012, and has shown strong industrial growth in the face of a very weak global growth and pricing environment. Although it's no longer a dividend aristocrat, GE's dividend should begin making noise once again now that it's on the rise and yielding more than 3%. For the long run, I feel GE has once again become a go-to company to own.

If you simply can't get enough information about GE, then I suggest getting your copy of our latest premium research report on General Electric. Our analysts have jam-packed this report with the opportunities and threats that could cause GE to rise or fall, and the report and comes complete with a full year of updates. Best of all, it'll cost you less than a week's worth of coffee. Get your copy by clicking here.