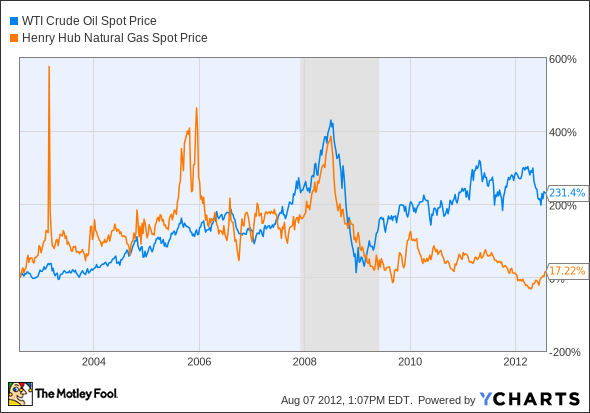 You might think that this trend will reverse itself and natural gas will again rise in price, just as fellow Fool Arjun Sreekumar suggested in an article titled "This Company Could Soar When Nat Gas Rebounds." But those following that logic have been wrong for three years, and the evidence doesn't show signs of rising natural gas being a question of "when" -- but a question of "if" it will ever rise significantly.

Fracking has changed the natural gas dynamic in the U.S., changing the cost structure and availability of natural gas. Based on these costs and the amount of supply added with every small increase in price, I see no end in sight for the cheap fuel source.

Cutbacks coming
The trend of increased natural gas drilling is coming to an end quickly, showing just how fast the industry can move. According to Baker Hughes and the EIA (shown below), the number of rigs drilling for natural gas has dropped dramatically since the fall. This shouldn't be a surprise. Companies like Chesapeake Energy , Quicksilver Resources, and EnCana have all begun to cut back on natural gas production in favor of liquids like natural gas liquids and oil because of the better economics in these areas.

The chart below is provided by the EIA, showing the weekly active natural gas rig count. Source: Baker Hughes and the EIA.

As you can see, there's been a big reduction in drilling rigs over the past five years, but it has yet to have a meaningful impact on the level of product in the market in the U.S. In fact, production has moved higher in the last five years while the rig count has moved lower, as you can see below. 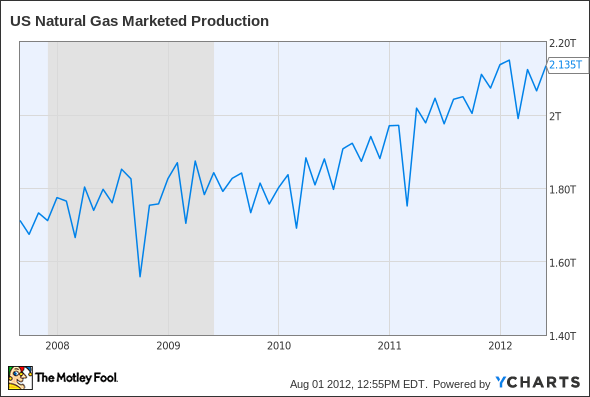 Production growth won't stop overnight
So, if the number of rigs drilling for natural gas is falling, why isn't production? First of all, a well is productive long after it's drilled, and even shale wells can be fracked up to 10 times in their useful life. Fewer rigs will lead to a slower increase in production, but not a decrease given the amount of drilling that's taken place in the last few years.

Drilling methods are also making each well more productive, as shown by the production trends above. So there's no reason to think that production will fall off a cliff overnight. If production doesn't fall, neither will prices.

The impact of marginal costs
When an oil and gas developer acquires land for drilling, it usually comes with upfront costs in the form of a payment to a landowner or purchase of the land. This is a sunk cost when considering whether this land should be developed going forward, so we need to consider what the marginal cost is for the next BTU of natural gas coming out of the ground.

Natural gas developers may not want to sell their natural gas for $2/MMBtu, but if the marginal cost is lower than that it is economical for them to do so. For this reason, with every penny increase in the price of natural gas, the more natural gas will be economical to produce. The more is produced, the higher the supply, which should lead to lower prices -- leading to a vicious circle of perpetually low prices.

How low is too low?
Based on company reactions in the past year, it would appear that the economic benefit of drilling for more natural gas ends somewhere between $3/MMBtu and $4/MMBtu. If the price of natural gas approaches the high end of this range, I think drillers will be enticed to move rigs back into natural gas and increase production.

In the meantime, we continue to have more natural gas than we need, and as we expand oil drilling, there will be incremental increases as well. The New York Times estimated that natural gas flaring in North Dakota alone was wasting 100 million cubic feet per day and less than one fifth of the state's wells are flaring at this point, so the state is producing a substantial amount of gas and growing. If drillers are transitioning to liquid plays there will still be an incremental increase in gas production to go along with it.

Foolish bottom line
Drilling companies are moving from natural gas to liquid plays, but that doesn't mean that natural gas' problems will be solved overnight. Production at wells continues, and production overall keeps increasing in the U.S. Based on this, there is no reason to believe that the short-term price of natural gas will increase significantly past around $4/MMBtu, where prices have hung for the last three years.

Even if it does approach that level, drillers will move back into natural gas as fields become profitable again. So for the long term, there isn't any reason to believe prices will rise significantly. Over the long term, supply and demand rule prices, and I don't see demand overtaking supply on a level that will drive prices higher.

As an investor, I want to take advantage of the low cost of gas, not bet on it rising. Three ways to do that are with Clean Energy Fuels , a company that is building an infrastructure of natural gas fueling stations for vehicles. Westport Innovations , which develops the technology that makes natural gas engines possible and has a number of heavyweight partners in the trucking industry. Finally, an even longer-term play would be Cheniere Energy, which is building an export station that will send our cheap natural gas around the world. These companies will win only if natural gas prices stay low.

To get a more detailed look at how Clean Energy Fuels is changing our energy future, check out our detailed report on the company. The report comes with updates every time major events happen and will keep you up to date on the stock. Click here for more information.