The task is made even harder when CEOs are compared across other companies and industries. Who's to say, for example, whether Steve Jobs of Apple was a better leader and visionary than Jeff Bezos of Amazon.com? Both founded and led companies that provide great products and services to their customers, as well as market-smashing returns for shareholders.

To normalize for variations across industries, in turn, the team at Chiefist developed its proprietary "Business Value Enhancement Metric," or BVEM, which employs a variety of metrics to rank CEOs of publically traded companies. Among other things, it incorporates margin expansion, earnings-per-share growth, and trends in both return on equity and book value per share.

Using this tool, at the end of last month I examined the best and worst small-cap CEOs. Over the preceding year, the stocks of the companies led by the best CEOs collectively outperformed the stocks of the worst-led companies by a staggering 92 percentage points. The former rose 60.8% on average, while the latter sank 31.4%.

What follows is Chiefist's current list of the 10 best mid-cap CEOs since the middle of 2010 (as with golf, a lower score is better):

An abbreviated rundown
As you can see, the list contains CEOs from a variety of companies and industries.

Stone Energy is one of the country's largest natural-gas producers. Fellow Fool Aimee Duffy included it in five natural-gas underdogs that "rarely make it into your water-cooler conversation, but are worth knowing about." Shares in the company are down since the beginning of August following the company's earnings miss of $0.62 a share versus the Zachs consensus estimate of $0.82.

FEI is the self-described world leader in the production and distribution of electron microscopes, which use electron beams to illuminate and magnify objects. Shares in the company jumped sharply at the beginning of the month after it reported record second-quarter results. It saw improvement on both the top and bottom lines, notching year-over-year increases of 5% and 16%, respectively. In addition, as noted by my colleague Brian Pacampara, it's been given a coveted five-star ranking in Motley Fool CAPS, our online community of 180,000-plus investors.

Jabil Circuit, the contract electronics maker, was recently named one of Fortune magazine's 2012 Most Admired Companies for the semiconductor industry. Despite this, following the company's third-quarter earnings report, Motley Fool blogger Harsh Chauhan noted, "Although its results came in line with Mr. Market's expectations, a light outlook for the current quarter suggested that the company was in for a difficult time ahead."

Shares in Nebraska-based Cabela's are on a tear of late, up nearly 90% since the beginning of the year. The popular outdoor retailer has recorded consistent year-over-year revenue growth for the last seven quarters, and it has grown same-store sales in six of those. Given this performance, I have to agree with my colleague Matt Koppenheffer, who noted that "the good times may continue for Cabela's in the quarters ahead."

Finally, Stratasys is the inventor of fused deposition modeling. What's this, you ask? Good question. In layman's terms, it's 3-D printing, or, as the company's website explains it, "an additive manufacturing technology that builds functional prototypes and production parts layer-by-layer in engineering-grade thermoplastics." Like Cabela's, Stratasys has destroyed the market this year, up more than 110%. This performance was validated at the beginning of the month by Stratasys' quarterly earnings, which impressed analysts on both the top and bottom lines. 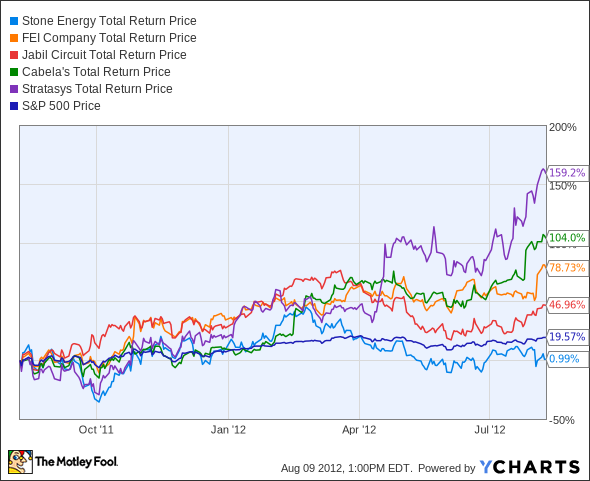