The Motley Fool has been making successful stock picks for many years, but we Fools don't always agree on what a great stock looks like. That's what makes us "Motley," and it's one of our core values. We can disagree respectfully, and we often do. Investors do better when they share their knowledge.

In that spirit, we three Fools have banded together to find the market's best stocks, which we'll rate on The Motley Fool's CAPS system as outperformers or underperformers. We'll be accountable for every pick based on the sum of our knowledge and the balance of our decisions. Today we'll be discussing Chesapeake Energy , a driller of natural gas, natural-gas liquid, and oil.

Chesapeake Energy by the numbers
The United States' second-largest natural-gas producer has had a dismal past year, with shares down 40% over the trailing 12-month period. Here's a quick snapshot of some figures that will better acquaint you with the company.

Sean's take
If not for Chesapeake's CEO, Aubrey McClendon, we wouldn't even be having this discussion, and investors would be buying America's second-largest natural-gas producer (behind ExxonMobil) hand over fist. Instead, as the CEO uses the company as his personal piggy bank and casts doubt over its fiduciary responsibility to shareholders, all while natural-gas prices decline dramatically, Chesapeake investors are left with the daunting task of deciding whether Chesapeake's assets are worth more than the current price being assigned to the company.

I, for one, can understand where naysayers are coming from. Chesapeake Energy doesn't pay a dividend, so there's nothing stopping you from taking your money over to the Chesapeake Granite Wash Trust , reducing your overhead, and simply collecting royalty interest on the production from the wells it owns. You'll likely give up a lot of price appreciation potential, but you'll also significantly reduce your risk with this approach. There's also Aubrey McClendon, whose management style has effectively driven Chesapeake's share price lower, and the recent announcement of a U.S. antitrust probe to add more fuel to short-sellers' fire.

However, there's also a bright side here that makes Chesapeake an intriguing buy candidate. Much like Encana to the North, which took to selling assets in British Columbia to generate cash and reduce its dependence on natural gas, Chesapeake is going to focus on asset development rather than land acquisitions. It has pledged to reduce capital expenditures by $6 billion in 2013 and will sell up to $14 billion in assets before this year is up in order to tighten a funding gap that has investors concerned. There are also plans in the works to reduce its reliance on natural gas while increasing natural-gas liquid and oil production. These are both higher-margin and much more stable fuels which should ultimately benefit Chesapeake's bottom line.

When push comes to shove, I'm willing to acknowledge that doubters of Chesapeake have viable concerns and Aubrey McClendon is an awful CEO. But with that, I'm also drawn by Chesapeake's underground reserves, which alone are worth about $26 billion. At current prices, investors are negating any chance of a natural-gas turnaround and are valuing any actions Chesapeake takes at zero. For that reason, I'd be a buyer of the stock here, albeit with a short leash.

Travis' take
The red flags concerning Chesapeake CEO Aubrey McClendon have been well-documented, and a CEO like that gives me the willies, to be honest. But Chesapeake isn't worth throwing out with the bathwater, and there are two reasons I think the stock is worth a further look.

First off, activist investors have been buying shares in the company and making changes at the top. Southeastern Asset Management and Carl Icahn own 13.5% and 7.5% of the company, respectively, and they won't likely let McClendon run the company into the ground now that they have four board seats. They've already stripped McClendon of his chairmanship (which every company should do), and they're providing needed protection inside the boardroom, which obviously didn't exist before.

The other positive is Chesapeake's shift from natural gas to liquid plays. The company is known as the No. 2 producer of natural gas, but after a land grab over the last few years, the company has assets in attractive places for producing natural-gas liquids or oil. The company's production of liquids was up 65% year over year in the second quarter to about 130,200 barrels per day and now represents 21% of production. As the company continues to focus most of its capital expenditure on liquid plays like Eagle Ford Shale, Utica Sale, and the Mississippi Lime, the company's return on investment and profitability should improve.

For me, the potential opportunity Chesapeake Energy presents is just too good to pass up, despite the risks. The company still needs to complete asset sales this year and next, but I think that won't be a problem with the activist investors pushing things along. I'll give an outperform call and reiterate Sean's "short leash," given the CEO's past transgressions.

Alex's take
Aubrey McClendon is an awful CEO, and natural gas is cheap. Those are the two biggest reasons why I'd avoid Chesapeake. But what kind of analysis would that be without some evidence? Better Fools than I (including Sean, above) have covered McClendon's many offenses against Chesapeake shareholders, but what about the relationship between natural gas and Chesapeake's share price? 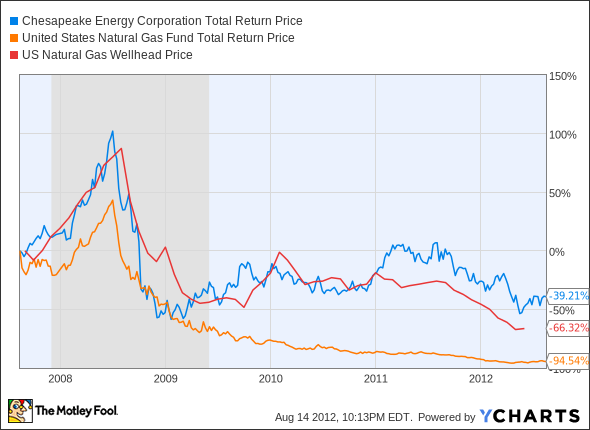 Chesapeake has managed to outperform the United States Natural Gas Fund in the past half-decade, but that's no great accomplishment. In the past year, Chesapeake's stock has tracked that fund's performance much more closely, which seems to devalue the argument that McClendon is primarily responsible for the stock's poor performance.

So does a buy call come down to McClendon shaping up? Nope. Is it all about the debt? That's certainly a major concern, and Chesapeake could be dragged under if it can't keep the debt churn -- i.e., paying down old debt by issuing even more debt -- going as it has. But Chesapeake appears to have enough assets to prevent a worst-case scenario from falling into total chaos. Rather, it looks like the price of natural gas, more than anything else, will determine Chesapeake's recovery.

One object lesson in transitioning from nat-gas operations is SandRidge Energy , which I recently profiled, evaluating its progress toward an oil-centric future. If SandRidge's strategy is where Chesapeake is headed, it'll take longer than a few short months to make it work, especially considering how much more invested Chesapeake is in nat-gas assets. SandRidge only recently became profitable, and it has spent years -- and billions in capital expenditures -- in transition.

Debt overhangs, commodity uncertainty, potential asset sales, executive mismanagement, strategic shifts -- there is so much happening here, and there seems to be more bad than good in the short term. I'll sit this one out.

The call
Chesapeake is definitely not an easy company to analyze, as you can see by the myriad of pros and cons we've all addressed. One thing we all agree on is that it's difficult to get behind a company whose CEO we don't believe in. However, in a split decision, Travis and I (Sean) have outweighed Alex's worries over natural-gas pricing and the shift to liquids in favor of placing a CAPScall of "outperform" on Chesapeake Energy in our TMFYoungGuns CAPS portfolio -- although that outperform call comes with a very short leash.

With many natural-gas drillers making the shift to liquids, the importance of oil is now greater than ever. That was the reasoning behind our analysts' research in their latest special report highlighting three companies you can buy to take advantage of $100 oil. Click here, and for a limited time you can get this report -- as well as an investing edge -- for free!