Cisco Systems limped into Wednesday's earnings report on a peg leg and two arthritic knees. Shares of the networking giant used to be a blue-chip of the highest order, a market barometer just about as reliable as the Dow.

But all that changed a couple of years ago, crippling Cisco's oh-so-limber frame. In 2009, Cisco abandoned a long-running philosophy of partnering with other tech giants. Instead, the company started building its own server systems -- and competing head-to-head with its bestest friends.

It took a while for the implications of this move to sink in, but they did so with a vengeance in the fall of 2010. By then, IBM and Hewlett-Packard had pretty much completed their moves from Cisco's friends, to frenemies, and then to outright rivals. And this lack of industry support started to show in Cisco's results.

This is what Cisco's formerly bulletproof chart has looked like since then: 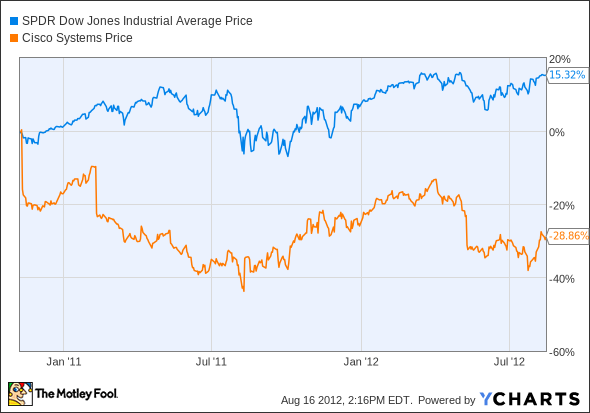 On a shorter timescale, Cisco started out strong in 2012, but has underperformed the Dow year to date. As of Wednesday night, the stock had lost 4% of its value this year, while the Dow gained 7.8% (and would have gone higher if longtime Dow component Cisco had gotten back on its feet).

But Cisco jumped 9% on Thursday, thanks to a positive earnings surprise. In the fourth quarter, Cisco delivered sales of $11.7 billion -- just ahead of analyst targets of $11.6 billion -- along with a 4% bottom-line beat down, at $0.47 per share.

Management felt so good about these results, that they boosted Cisco's dividend payout by a massive 75%. The company also committed to spending at least half of free cash flows on buybacks and dividends from now on. This promise isn't much of a stretch, considering that Cisco spent 60% of its free cash on these items over the last four quarters, but it's always good to have a concrete plan in hand.

At the new quarterly payout of $0.14 per share, Cisco sports a 2.9% dividend yield as of  today. That's much stronger than IBM's 1.7%, despite Big Blue's noted love of shareholder-friendly cash management. Cisco still has a ways to go before catching Intel and its 3.4% yield, but nothing is impossible with raises like this one.

So, Cisco suddenly became a very respectable income stock. But where, pray tell, did CEO John Chambers get the motivation to join that club?

If you ask Chambers himself, he'll say that the server gambit is paying off in spades.

Sales of Cisco's so-called Universal Computing server systems jumped 58% year over year this quarter, and that success translates into add-on sales of networking gear that was designed with the UCS platform in mind. "Our strategy -- delivering intelligent networks and technology architectures, built on integrated products, services and software platforms, to fuel our customers' businesses -- is proving the right long-term strategy for our success," Chambers said before ticking off all the hot boxes in today's IT business. "There is no question that our industry and our world are evolving quickly and Cisco is squarely at the center of major technology market transitions -- cloud, mobile, visual, virtual and social."

Hope you had your IT Bingo card ready at the end. Living "squarely at the center" of all these megatrends would indeed be cool, but that's not necessarily true just because Chambers said so. In particular, the company plays a peripheral role in virtual computing, and nearly none at all in social networking.

Was it worth it, John?
I like strong competition, and it's good to see Cisco clawing back some value from that big, gutsy server bet. However, it took three years to get here. Cisco's cash flows had been shrinking until this quarter's snap-back, and sales growth was anemic, at best. And Cisco's investors have lagged the Dow by 40% during this grand experiment.

Was it worth it? I don't think so. Closing up that big market gap will take several more years, if Cisco can do it at all.

Putting Cisco's miserable recent history aside, this could be a good time to get started in the stock. If nothing else, Cisco is starting to look like a nice, defensive alternative to Intel. To understand why that laurel is a big deal, read up on Intel in our brand-new premium report on the chip titan. This is required reading for tech investors with a yen for strong dividends, making the report a good primer for Cisco's new direction, as well. Click here to claim your copy today.