From allergies to athlete's foot, headaches to heartburn, ringworm to rashes, Perrigo Pharmaceuticals has a treatment. Perrigo's vast portfolio of generic drugs helped the company wrap up a financially solid fiscal 2012. Its earnings report shows that year-over-year sales were up, gross profits were up, and net income was up -- but its share price is down.

How to make money from drugs -- legally
Perrigo manufactures many of the over-the-counter and prescription drugs you might see at your local drug store. The company sells generic counterparts to drugs like Tylenol, Pepcid AC, and NyQuil, and also has a robust offering of prescription medicines that treat diseases like psoriasis and acne.

Perrigo's had a great run over the last five years: 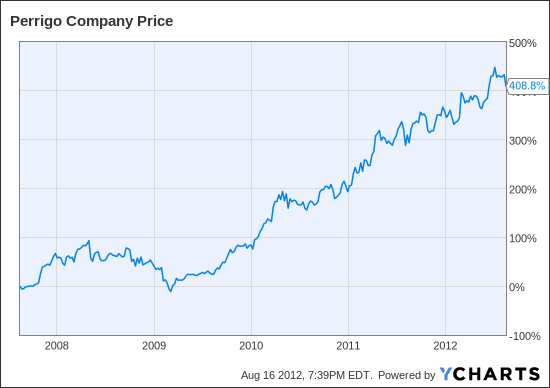 Why investors broke out in hives
The numbers from Perrigo's fiscal year, objectively speaking, look amazing. Its total sales of $3.2 billion were the company's highest ever and grew by 15% compared to 2011. Gross and net profit margins stayed level, but year-over-year net income jumped 18.4%. Some of this growth was fueled by the acquisitions of two smaller pharmaceutical companies, CanAm Care and Paddock Labs. They collectively added $245 million to Perrigo's top line, which more than matched the company's $211 million in revenue from new drugs.

As my colleague Jeremy Bowman pointed out, however, Perrigo's shares didn't lose value because its earnings were bad -- the share price dropped because earnings just weren't good enough. Analysts thought that Perrigo would round out the final quarter of the year with $856 million in sales, but the company's $832 million looked downright puny in comparison. Perrigo's shares rapidly lost more than 6% of their value after these numbers were released.

A rational investment?
Perrigo fell short of its earnings forecast for two quarters running, but it might be a good idea to stick with this company at least until its next quarter's results are released. Perrigo has many merits, including a huge product line and strategic acquisitions that have already added plenty of value. The company also has a rich pipeline, with 13 OTC and prescription generics approved this year and almost 40 prescription drugs currently under FDA review.

Additionally, Perrigo's diverse products are complemented by its high margins. Perrigo, like many generic-drug makers, increases its margins by making its own active pharmaceutical ingredients. APIs are the parts of a medication that directly treat the disease. You can think of Perrigo making its own APIs kind of like a pizzeria that makes its own flour, sauce, and cheese; the company has a more efficient supply chain and is not at the mercy of suppliers' price fluctuations.

Perrigo has some of the highest margins in the generic pharmaceutical industry. Over the past year, its profit margin dwarfed those of prominent generic-drug makers Watson and Mylan . Perrigo is on par with competitor Medicis , but falls behind Teva , which is one of the largest generic-drug makers in the world and undoubtedly benefits from enormous economies of scale.

It's tough to make a long-term call on Perrigo right now, but it has a fundamentally strong business. I'll be tracking its progress on my Motley Fool CAPS page and I'll keep a close eye on its revenue, margins, and FDA approvals in future earnings reports.

Perrigo's future as a stock hinges on meeting Wall Street's earnings estimates, but bankers don't always make the right moves. Our analysts have uncovered three stocks that Wall Street has neglected, but could be a perfect fit for your portfolio. Click here to access this free report today: "Middle-Class Millionaire-Makers: 3 Stocks Wall Street's Too Rich to Notice."