The long-term performance of companies that have a large market share in the cell-phone market is not a strong one. A decade ago, Nokia and Siemens topped the most-popular cell-phone lists, and today Siemens is out of the game while Nokia is a floundering company that's desperately trying to stay in the market. Motorola had its time in the sun, when its Razr spent a few years as the "it" cell phone. LG and Sony Ericsson had their day, and not long ago Research In Motion's BlackBerry was more commonly known as a CrackBerry because it was such an addictive device.

At the peak of their popularity, any of these companies seemed destined to dominate cell phones forever -- and in each case, the most profitable thing investors could have done is shorted their stock. 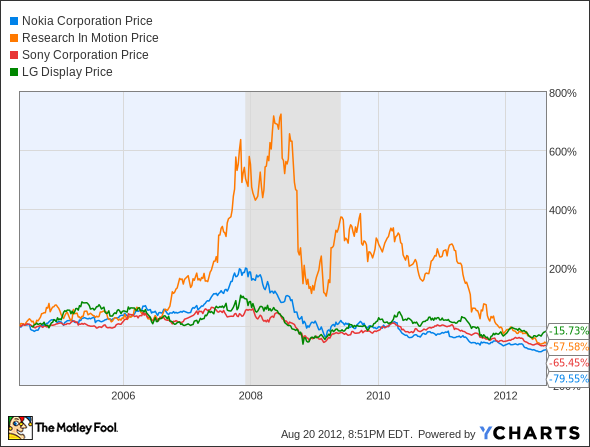 So what makes Apple different this time around? If there's one question that bothers me about Apple more than any other, it is this one.

I'll leave when I want
The greatest challenge for any cell-phone maker is that switching costs are very low. Consumers can come and go as they please, and with technology changing rapidly in the cell-phone market, most consumers upgrade about every two years by design. Brand loyalty has been very low in the past, something that Apple has tried to change, but there's no guarantee that Apple will be able to keep a majority of its customers long-term.

For example, I am going to buy a new cell phone this fall to replace my current iPhone 4, which is getting old. Right now, I'm assuming that I'll upgrade to the iPhone 5 (or whatever they call it), but if form factor, interface, price, or any other number of factors isn't desirable, I could easily switch to a different phone. Samsung is now making phones that are just as good as, if not better than, the iPhone in many ways, and my only real deterrent would be the integration the iPhone has with my other devices. Since Google has the other dominant operating system and the cloud is growing, this isn't really the deterrent it was a year or two ago, and I could leave Apple if I really wanted to.

The cloud is expanding
Apple was one of the first to bring easy integration with the cloud to a broad number of devices. But that lead is slowly evaporating as other players in the cloud market step up their game.

Google is the biggest competition, since it has a larger share of mobile devices on its Android operating system. You can now store all of your music online with Google Play, documents can be stored and shared online with Google Docs, and things like calendars, contacts, and pictures are easily shared between your Google account and other devices. Since this is less proprietary, it is arguably easier.

Microsoft is also expanding its cloud presence with its new mobile and desktop operating systems. The company's early announcement of Windows Phone 8 indicated improved integration with other Microsoft products, although details were a bit sparse. Business users will probably be the target of these improvements, and integration with Windows 8 and cloud services helps Microsoft level the playing field a bit.

The bottom line here is that the cloud probably won't be a huge differentiator for Apple, meaning switching devices will be easier and easier as cloud services grow.

Innovation will be the key
What Apple has managed to do better than Nokia, Motorola, Sony Ericsson, and other cell-phone makers is innovate faster to maintain a lead in the market. This is Apple's calling card, but even one flop in the iPhone would change the company's fortunes. History tells us that eventually someone will surpass Apple -- something many think Samsung has already done.

I'm not suggesting that Apple will release a disappointing iPhone or that the company's sales or profits will suffer in the coming years, but investors need to be aware that this is one of the biggest risk to the company. No cell-phone maker has stood the test of time, so why is Apple any different?

Our Apple analyst thinks he has the answer. In a new premium report, he highlights how Apple has grown into the power it is today and how it will stay there. You can claim a copy of the report, which comes with a full year of analyst updates.

Will Apple Crumble Just Like Those Before It? @themotleyfool #stocks $AAPL $MSFT $GOOGL $NOK $SIEGY Next Article
Current