Just less than a year ago, I presented a two-part explanation for why I believed Primero Mining was the greatest gold stock in the world. I later selected Primero as my No. 1 stock pick for 2012. When the stock then stumbled to its 52-week low earlier this year, I encouraged readers to remain focused on Primero's golden promise.

Today, I am pleased to report that Primero has indeed proved the greatest gold stock to own through this period. After pausing its intended growth trajectory to properly and conservatively reassess the geological models that guide mine production and resource estimation, Primero has executed beautifully on all fronts to propel the industry's most noteworthy breakout performance for the year.

As the following chart will show, Primero's astonishing 74% surge over the past six months stands in stark contrast to a corresponding 19% drop for the Market Vectors Junior Gold Miners ETF that includes Primero plus 82 of its junior gold peers. The gold price, depicted below with the same SPDR Gold Trust bullion proxy that some eye-catching names have been buying lately, was roughly flat over the same period. 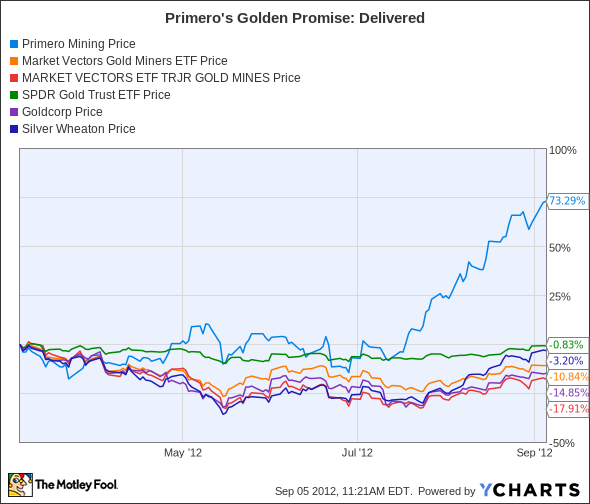 The long-term promise of Primero Mining
Now that Primero has delivered so convincingly on the company's near-term priorities of tweaking operations under the revised resource model and rebuilding its resource base in the immediate vicinity of current production, my Foolish gaze extends out over the horizon onto Primero's next round of likely achievements.

Primero is currently mulling an expansion of the San Dimas mill to process either 2,500 or 3,000 tons per day, and that decision is expected later this month. On the heels of a substantial midyear resource expansion announced this week -- which carried Primero's total resource (indicated plus inferred) beyond 1.5 million ounces for gold and 108 million ounces of silver -- the foundation for the company's targeted two-year transformation to increase production by 68% to 82% (reaching 200,000 gold-equivalent ounces per year) appears quite strong.

But the true golden promise of Primero Mining is bigger still than the looming potential catalysts of a positive mill-expansion decision and a positive determination by Mexican tax authorities regarding the treatment of silver delivered into Primero's stream deal with Silver Wheaton . Primero's true long-term promise lies in the enormous potential for game-changing resource expansion as exploration efforts shift to the more than 100 known epithermal veins within the San Dimas property that lie beyond the recently enlarged resource base.

That tremendous exploration potential, together with the inevitability of a strategic acquisition or merger over the medium term, underscores the phenomenal long-term value-generating potential that keeps 41% stakeholder Goldcorp entrenched in these Primero shares. With the company's enterprise value still 25% beneath the $500 million price tag of Primero's founding transaction, not even this outstanding trailing surge in the shares will prompt me to remove Primero Mining from the set of top picks I've highlighted within my Motley Fool CAPS portfolio. To track all my coverage of this and other top picks among the miners of silver and gold, please bookmark my article list or follow me on Twitter.