Shares of Exelon hit a 52-week low on Tuesday. Let's take a look at how it got there and see whether cloudy skies are still in the forecast.

How it got here
Is Exelon going the way of the dinosaur? You'd almost think so by the way its share price has done practically nothing since the recession.

Exelon provides electricity to 6.6 million U.S. residents, and it will remain the largest provider of electricity in the U.S. if the merger between Duke Energy and Progress Energy is reversed (the combined Duke-Progress entity has 7.1 million customers). Unlike the utility providers that have been spending voraciously to shut down their plants or transition them from coal-fired to natural-gas-burning in order to take advantage of cheap natural-gas prices, Exelon hasn't had that luxury. Exelon, being the largest supplier of nuclear energy, has had to contend with the high costs of nuclear relative to almost every other fuel source, as well as the addition of new nuclear license approvals for SCANA and Southern Co. .

Exelon is making strides to address this situation, including a contract with First Solar to complete a 16.1 MW power-grid-attached photovoltaic-panel solar facility in Maryland. In addition to adding alternative energy sources, Exelon has followed Duke in seeking lucrative buyouts. It purchased both Constellation Energy and Baltimore Gas & Electric and fully expects the purchases will be accretive to earnings in 2013.

How it stacks up
Let's see how Exelon stacks up next to its peers. 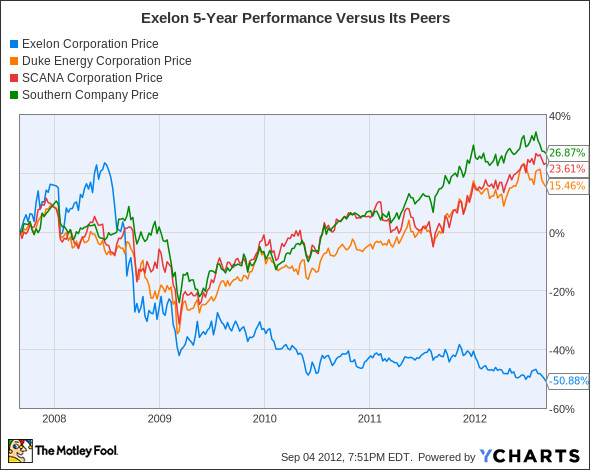 I'm going to let this one speak for itself!

There really aren't many degrees of separation among these utilities beyond their price-to-cash-flow ratios. Exelon is valued at nearly half the level of its peers relative to cash flow, and much of that has to do with the company's reliance on nuclear energy. With Exelon's management warning that the cost to build nuclear facilities could require government subsidies in the future, investors haven't been willing to give Exelon the same premium as its peers.

It's also worth noting that Exelon's debt-to-equity position is also considerably lower than SCANA and Southern and slightly lower than Duke. That means more flexibility with regard to making future acquisitions and in undertaking alternative-energy and coal-to-natural-gas transitions.

What's next
Now for the $64,000 question: What's next for Exelon? That question depends on the stance the U.S. government takes toward investing in or shying away from nuclear power, whether Exelon can continue to make accretive acquisitions, and whether it can successfully pass along steady price increases to its customers to match the rising costs of operating its nuclear facilities.

Our very own CAPS community gives the company a highly coveted five-star rating, with an overwhelming 97.2% of members expecting it to outperform. Count me among the 1,900 optimists as well, even with my CAPScall currently underwater by seven points.

Exelon clearly has challenges ahead of it, such as growing its nuclear business in light of historically weak natural-gas prices. However, Exelon can also tout that nuclear power is a clean energy. With the U.S. government pushing for cleaner energy alternatives, a subsidy of some form is not out of the question. Between Exelon's alternative-energy expansion and addition of Constellation Energy, I feel investors are severely undervaluing Exelon at current levels, and I have no plans to close my outperform call in CAPS anytime soon.

Are there more contracts -- just like the one it negotiated with Exelon -- in First Solar's future? Find out the answer to this question and many more by getting your copy of our latest premium research report on First Solar. This report contains in-depth and unbiased analysis on the opportunities and pitfalls that could move First Solar's share price, and it comes complete with one year of regular updates. Click here to get this report and claim your investing edge.