The Motley Fool has been making successful stock picks for many years, but we Fools don't always agree on what a great stock looks like. That's what makes us "Motley," and it's one of our core values. We can disagree respectfully, and we often do. Investors do better when they share their knowledge.

In that spirit, we three Fools have banded together to find the market's best stocks, which we'll rate on The Motley Fool's CAPS system as outperformers or underperformers. We'll be accountable for every pick based on the sum of our knowledge and the balance of our decisions. Today, we'll be discussing Bank of America , one the United States’ largest money center banks.

Bank of America by the numbers
Bank of America has been the best-performing stock in the Dow Jones Industrial Average year to date, up a brisk 44%. Here's a quick snapshot of some figures that will better acquaint you with the company.

Sean’s take
Let me start off by admitting that I’m going to be the brutally biased one of the group, as I do own shares of Bank of America in my personal portfolio. However, that doesn’t mean I don’t understand that there are both opportunities and risks that could help and hurt the company.

Legal risks are what I see as the biggest deterrent for Bank of America. Overhang from the foreclosure scandals which levied a landmark $25 billion settlement on the banking sector, and industry-wide mortgage-based regulatory changes set to take place by October, could be a drag on future results. And this, of course, is just the beginning…

Low lending rates, which can be something of a savior for banks, are also putting a ceiling on many of Bank of America’s investment returns. Let’s not forget that Bank of America is also being investigated, along with JPMorgan Chase and Citigroup, for allegedly fixing the LIBOR rate, the London Interbank lending rate that helps determine $10 trillion worth of mortgage, credit, and auto loans rates worldwide. Long story short, there are plenty of challenges here.

There are also plenty of opportunities, as well, beginning with the bank’s miniscule price-to-book value. As long as you believe in the quality of Bank of America’s loan portfolio, which, in this case, means you feel it will be able to successfully free itself of the toxic loans it inherited when it purchased Countrywide Financial, then you could be getting a prime deal.

Bank of America’s credit quality and tier-1 common ratio have also been improving, which demonstrates what lengths the bank has gone to in order to shore up its balance sheet. Provisions for credit losses decreased to their lowest level since the first-quarter of 2007. More importantly, Bank of America has been shedding non-core assets, including selling its stake in China Construction Bank and Merrill Lynch’s international business, in order to raise capital.

I’m not saying Bank of America is a pound-the- table kind of buy, nor is it a company that will double your money overnight, but it’s made enough strides in improving its credit quality, raising cash, and paying down its debt, that there’s little reason why it couldn’t raise its dividend in the near future, and get back to the things that made Bank of America great once before. Consider this an outperform call from me.

Alex’s take
As I often do, I’m going to lead off my argument with a chart: 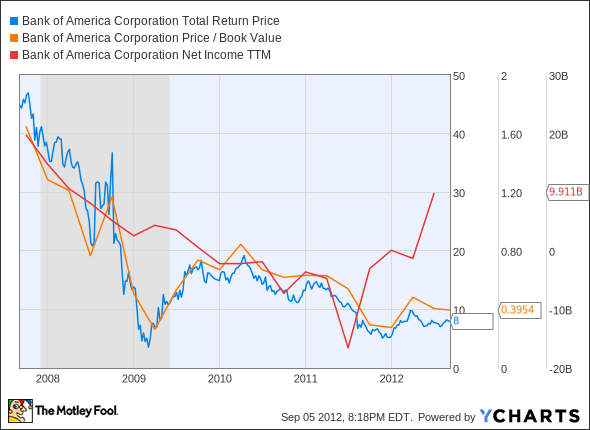 Now, let’s explain it. B of A has a miniscule price-to-book ratio because its stock price is low. It could go up because investors think it should be higher. This is a chicken-and-egg argument that should make no difference to your investing thesis beyond anticipating market psychology. What really appears to matter is net income. Before (and after, in fact) the crash, B of A’s stock price tracked the change in its bottom line very closely -- nearly as closely as it has tracked price to book: 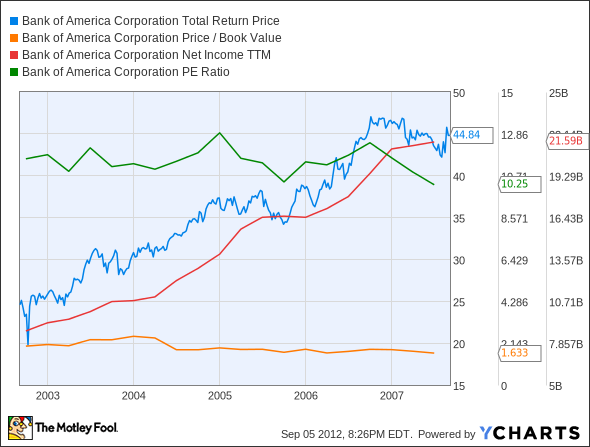 B of A’s big bottom-line bounce in its recent quarter, according to Fool contributor Tim Brugger, is "hogwash in a number of ways." As crash-related write-offs will eventually cease to impact results, that bottom line should even out in positive territory. When? Risks still abound, including exposure to Europe’s doddering economies and multiple legal conflicts, covering issues ranging from a conspiracy trial of former UBS employees who rigged B of A’s muni bond bids to the unfolding LIBOR scandal. JPMorgan is trying to horn in on B of A’s branch-banking business in many locations, even as B of A intends to close nearly 1,000 branches in total over the next few years.

These are problems. However, if I can’t say that these problems pose more downside risk than upside risk, I can’t, in good conscience, put an underperform call on Bank of America. Its exposure to the worst European economies is "only" $14.5 billion, less than half of what it received from the TARP bailout. B of A’s excellent online service -- (full disclosure: I was a Bank of America banking customer until last month, and retain a B of A credit card)--  makes cutting its retail locations a sensible choice, as many customers can do virtually all their account maintenance online. And, let’s face it -- banks have done some really unpalatable stuff in recent years, and have thus far gotten nothing more than slaps on the wrist.

There are other banks, particularly Wells Fargo, which I like better as long-term investments. But since Sean’s twisting my arm with this pick, I’ll have to go along grudgingly with an outperform call. This wounded whale should heal, and there’s the best time for investors to catch a ride is while it’s still weak.

Travis’ take
Let me start off with a question: Do you know what is on Bank of America’s balance sheet?

To answer my own question: YOU HAVE NO IDEA.

When the credit crisis was hit in 2007/2008, we found out how little bank managers knew about what risks banks had on their balance sheets. The lesson we can take from that is that investors know even less. Credit default swaps, mortgage-backed securities, and a variety of other derivatives are complicated on their own, so a portfolio of these instruments is a nightmare for investors to analyze. Let me point out a few scary numbers, just to put my skepticism in context.

At the end of the second quarter, Bank of America had $3.3 trillion (with a T) notional value of written and purchased credit derivatives. The credit risk they assigned to this massive amount of trading? Just $13.6 billion. The problem with credit derivatives is that they don’t account for financial dislocations, and it’s these dislocations, not "normal" economic conditions, that pose problems for banks. Let’s say, for instance, that JP Morgan has a $10 billion trading loss, and there’s a run on the bank, leaving the company bankrupt (obviously not out of the realm of possibilities). The impact would cascade down the industry because, undoubtedly, some of that $3.3 trillion of derivatives are with JP Morgan. What would the company’s losses be? Who knows?

The second number that scares me is $318.9 billion, the amount of short-term debt that Bank of America averaged during the second quarter. Most of this is in the repo market (very short-term repurchase agreements), which, you may remember, was a major contributor to the downfall of Lehman Brothers.

If it sounds like I’m just scared of banks, in general, you would be right. In just the last few years, we’ve seen Lehman Brothers fail, a massive government bailout, Knight Capital lose hundreds of millions of dollars in a matter of minutes due to a trading glitch, MF Global, and a trading loss that could have brought JP Morgan to its knees. If we knew when these events would happen, it would be a different story -- but we don’t.

If I’m going to own a bank, it will be one that uses fewer "financial weapons of mass destruction," which Warren Buffett called derivatives. US Bancorp would be on the top of my list, and Wells Fargo would be in consideration, but I would stay far, far away from Bank of America. The stock may very well outperform over the next few years, so I’m not making an underperform call. If there are no crises, and the economy continues to recover, the stock will likely do well. But the downside is a total wipeout in a matter of days (see MF Global and Lehman Brothers) -- not a risk I’m willing to take.

The call
One thing’s for certain, banks haven’t exactly inspired a fuzzy warm feeling inside of any of us. In spite of Travis’ warning signs, which include derivative bets and high short-term debts, by a margin of two-to-one, we’ll be making an outperform CAPScall on Bank of America in our TMFYoungGuns CAPS portfolio. Like our previous rebound candidates, we’re likely to keep this one on a short leash, in case the global economy again heads south; but Alex and I (Sean) can agree that there’s more potential upside than downside left in Bank of America.

Want even more opinions on Bank of America? Don’t worry, we’ve got you covered with our latest premium research report on Bank of America. This report is the most in-depth and unbiased way to uncover the opportunities and pitfalls that could move Bank of America’s share price, and it comes complete with a year of regular updates. Click here to get this report and claim your investing edge.