Shares of Chevron hit a 52-week high on Monday. Let's take a look at how it got there and see if clear skies are still in the forecast.

How it got here
Can anything stop a big oil company benefiting from robust oil prices and an abundance of new oil and gas field finds? Probably not, unless oil prices fall back to their 2009 lows again!

Chevron has been benefiting most from its downstream refining operations which have been helped by lower oil prices and higher crack spread margins. Refining and chemical operations profit jumped a robust 80% in the second quarter. If there's been any chink in Chevron's armor, it's been that lower realized oil prices toward the end of the second quarter caused a double-digit revenue decline in its upstream production business. Consider me unconcerned, however, as operating margins still expanded 50 basis points to 19.7%.

The real story behind Chevron's rise is a macroeconomic play that things aren't as bad as they first appeared. The European Central Bank and Mario Draghi have made it clear that the ECB will provide the needed liquidity to member nations by purchasing their bonds in exchange for outside fiscal oversight. Also, China approved a $156 billion infrastructure improvement plan to spur growth. Both of these moves should theoretically boost global output which should, in turn, cause the demand for oil to rise around the world. Of course, it's a nice plan on paper, but Europe's debt crisis and China's slowing growth are trends that aren't expected to disappear overnight.

How it stacks up
Let's see how Chevron compares to its peers. 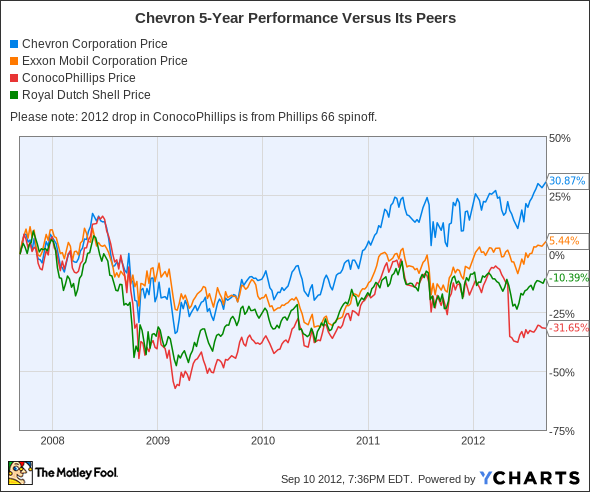 Note that ConocoPhillips' large drop in 2012 was due to its spinoff of Phillips 66 and thus makes its performance more in line with the rest of the sector.

Unfortunately, this is another one of those cases where the metrics provided aren't going to give us very much differentiation between companies. Royal Dutch Shell and Conoco (the latter which recently spun off its downstream operations) sport the highest yields, Chevron offers probably the best overall value and yield package, while ExxonMobil has the widest-reaching portfolio of assets. In short, there's nothing I don't like about the potential for this group of companies.

Another positive aspect about this sector is the string of rising annual payouts. Chevron moved into dividend aristocrat territory in 2012 by bumping its dividend higher for a 25th straight year, ExxonMobil has boosted its dividend for 30 consecutive years, and Conoco has rewarded shareholders with rising dividends for 12 years in a row. Royal Dutch Shell has been late to the party, but obliged with its first dividend hike in three years in 2012.

What's next
Now for the $64,000 question: What's next for Chevron? The answer, and the answer for the entire oil and gas sector, depends on the global economic recovery. China's manufacturing output and Europe's drag are two factors worth paying attention to that will determine the health of this sector.

Our very own CAPS community gives the company a highly coveted five-star rating, with an overwhelming 96.1% of members expecting it to outperform. I, too, can be counted among the optimists, having made a CAPScall of outperform, although my current score is underwater by three points.

There really isn't a reason not to like Chevron unless you have a stark social responsibility stance regarding your investing philosophy. Chevron's dividend has been headed remarkably higher over the past couple of years and its widely diverse portfolio of assets means it's not too exposed to any particular region. Trading at a slight discount to ExxonMobil, Chevron appears in prime position to head higher.