This stock just hit a 52-week milestone. Where will it head from here?

Shares of Symantec hit a 52-week high on Wednesday. Let's take a look at how it got there and see if clear skies are still in the forecast.

How it got here
It's been quite the turnaround for Symantec, which went from trading at a 52-week low to peaking at a 52-week high in just two months. Driving growth is a mixture of compelling valuation, and a spending boost from companies eager to build their businesses in the cloud.

In Symantec's first-quarter results released in July, the company reported 1% sales growth and a 7% rise in income in spite of a double-digit negative currency translation headwind. Symantec's management noted order strength across all of its business segments, including a big jump from its security and compliance segment.

Simply put, no trend offers Symantec a greater opportunity to expand than cloud-computing. Traditional security options offered by Juniper Networks and Cisco Systems , which are often built into networking hardware and are geared more toward traditional website models, respond less effectively to dynamic web-based social and cloud platforms. Symantec's Norton Antivirus, Intel's McAfee, and AVG Technologies' "freemium software" provide a wider base of protection, but require constant updates which can be a strain on the customer. That's why Symantec is modeling its next generation of security software closer to Palo Alto Networks , whose software is predominantly self-managing and geared toward cloud-based data center protection.

How it stacks up
Let's see how Symantec compares to its peers. 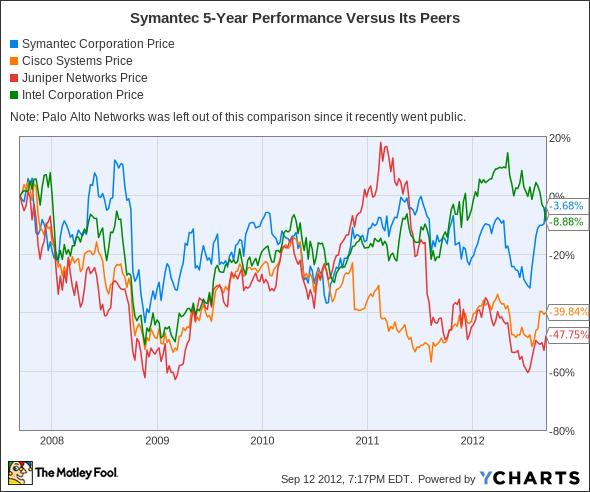 In spite of the fact that security software is a basic necessity to operating a network, security companies have performed rather poorly over the past five years.

Let's play a game of "Which One Doesn't Belong?" If you said Palo Alto, you'd be correct, as the relatively young company is still growing by leaps and bounds at the expense of its profitability. However, I find it hard to argue with a five-year growth projection of 50% thanks to growth in the cloud.

McAfee has really struggled recently as Intel turns its attention to growing the hardware side of its cloud business, leaving its McAfee operations on cruise control. Although partnerships are being formed in the cloud and OEM arrangements still bring in good cash flow, McAfee's days as a premier security company may be waning.

Cisco and Juniper are gearing up to be hardware suppliers of choice for big data centers, but they'll likely take a back seat from a security development perspective.

Finally, Symantec offers perhaps the most compelling valuation of this group (next to Intel), even after its 50% run-up from its lows in July.

What's next
Now for the $64,000 question: What's next for Symantec? The answer depends on how seamlessly it can transition its business to take advantage of the boom in cloud spending, if it can keep its costs in check as it expands into the cloud, and whether the company institutes a quarterly dividend after having generated $1.7 billion in operating cash flow over the trailing-12-month period.

Our very own CAPS community gives the company a three-star rating (out of five), with 85.4% of members expecting it to outperform. This is one case where my timing was nearly perfect as my CAPScall of outperform is currently up 35 points since my selection in July.

You might think after the sharp rise in Symantec's valuation when combined with tepid revenue growth that I'd take my gains and run for the hills, but it's just the opposite. At only 10 times forward earnings, Symantec's valuation is still incredibly reasonable -- especially with potential for a dividend to be introduced. Symantec has legacy OEM agreements for its software on many PCs and laptops, and is beginning to work its way onto the cloud-computing scene. While its growth rates will never match that of Palo Alto (at least not anytime soon), it offers the right balance of value and growth to warrant a long-term hold.

Will security play a big part in Intel's plans to make its mark in the cloud? Find out the answer to this question and much more by getting your copy of our latest premium research report on Intel. This report analyzes every opportunity and pitfall that could affect Intel's share price over the long-term, and it comes complete with a full year of regular updates. Claim your investing edge now!