All eyes are on the Federal Reserve this week as its monetary-policy committee meets to decide whether to unleash another round of quantitative easing in an effort to further depress long-term interest rates. Widespread anticipation that it will err on the side of taking action has caused the markets to skyrocket in recent days despite an onslaught of bad news from Europe, China, and the United States. In what has historically been the worst month of the year for stocks, the Dow Jones Industrial Average is already up by 2.3% in September.

However, while quantitative easing may be good for the market overall, it certainly isn't good for one subset of financial companies: mortgage real-estate investment trusts. Otherwise known as mREITs, they can be thought of as leveraged funds specializing in real estate. Their business model consists of borrowing money at low short-term interest rates, typically in the repo market, and then using that money to purchase higher-yielding mortgages or mortgage-backed securities. The difference between the yields, known as the interest rate spread, is where they make their money.

In addition, because mREITs must distribute at least 90% of their earnings to shareholders in order to qualify for pass-through tax treatment, they've become a favorite among income investors. The largest player in the field, Annaly Capital Management , yields a whopping 12.5%. Other mREITs are equally lucrative: American Capital Agency pays 14.3%, Chimera Investment pays 13.6%, and Invesco Mortgage Capital pays 12.5%.

The reason quantitative easing is so bad for these companies is that lower long-term interest rates lead to a tighter interest rate spread. For example, take a look at the following chart, which compares Annaly's quarterly dividend to the difference between the yield on two- and 10-year Treasuries. As you can see, there's a clear relationship here: When the spread expands or contracts, so does Annaly's dividend. 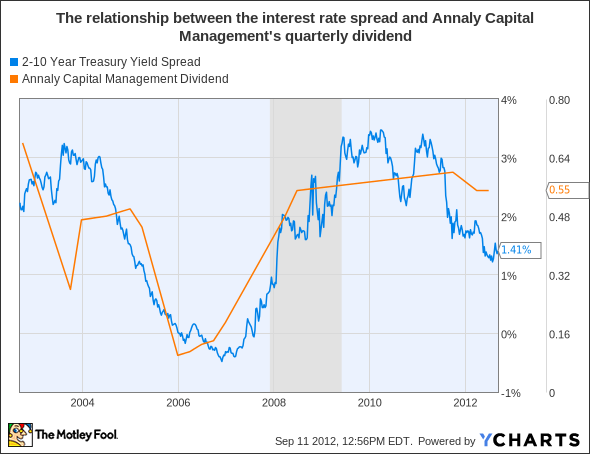 Although the chart only looks at Annaly, rest assured that the same relationship exists with the other mREITs mentioned above. In the past two years, American Capital cut its dividend from $1.40 to $1.25, Invesco reduced its dividend from $1 down to $0.65, and Chimera slashed its payout down from $0.18 to $0.09.

Are your dividends safe?
There's no denying that high yields like the ones above are extremely appealing. At the same time, however, the companies underlying them are vulnerable to a number of daunting risks, only the most immediate of which is quantitative easing.

To learn about the other risks facing mREITs and to see whether your dividends are safe, check out our recently released in-depth report on Annaly Capital Management. Among other things, it identifies three critical factors that every current and prospective investor in Annaly should be aware of. The report also comes with a year of updates. To get your investing edge, simply click here.