How do you turn a good year of investing into a nightmare almost overnight? Today I'll tell the tale of my biggest loss in investing and how you can avoid making the same mistakes.

It starts with a promising stock that was growing and making money in an emerging market. But, this stock was full of risks that this Fool overlooked, and to make matters worse I used a risky trade that made for devastating losses.

Once there was a growth stock
I've always had an eye on emerging industries and the trends that I believe will drive a stock's gains into the future. So in the summer of 2009 I spotted a company I thought was perfect -- American Superconductor . The company provided parts and technology to wind turbine manufacturers, made a superconducting cable that showed a lot of promise, and had a vision for how it fit into the world of renewable energy and energy efficiency.

I was intrigued at the time but I didn't buy the stock because the company wasn't profitable. In any emerging business it's always important to find a company that can actually swing a profit and not just live on hope and promise. But, the company swung to a profit in 2009 and in mid-2010 I decided it was time to pull the trigger. What could go wrong with a company that was growing, profitable, had a good balance sheet, and operated in the emerging renewable energy market? 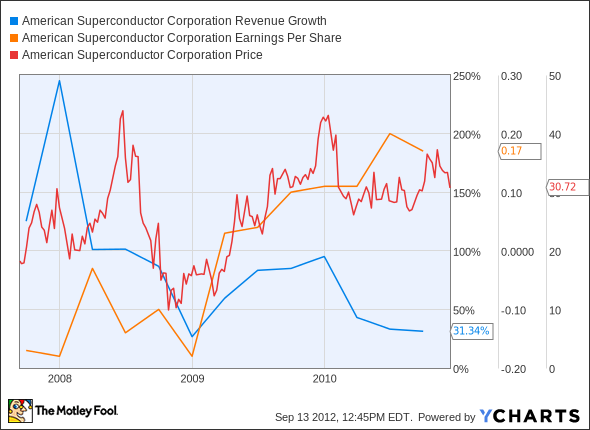 Looking at the chart above you can see how easily I could have been fooled. Everything looked to be running smoothly.

My biggest mistake
Picking a bad stock isn't good, but where I made my problems worse was by selling put options that essentially gave me a huge downside with little upside. I sold out of the money puts a month or two out thinking that my risk would be very low. Boy was I wrong.

The hammer drops
The stock started dropping in early 2011 after investors started to get nervous about the amount of sales going to Sinovel, American Superconductor's main customer. Sinovel was having some trouble of its own and investors were right to be worried. Competitors like General Electric , Siemens , and Gamesa had flooded the market with wind products and they were fighting for a shrinking pie.

The hammer dropped on April 6 when the company announced that Sinovel had refused a contracted shipment and refused to pay for previous shipments. American Superconductor said it would have to go back and change revenue recognition (something it should have done earlier) and it would now have to report a loss for the fourth quarter.

Of course, lawsuits were filed and the question mark about China's intellectual property protection became a serious concern for me for the first time. This is the stuff you hear about in the movies, not something that sinks a stock I own, or so I thought.

What did I learn?
First, I learned that conditions can change quickly in emerging industries. American Superconductor's business looked strong in the wind business. Yet, not only did its main customer drop it, but the wind industry has had a lot of trouble in the last two years. This only made things worse and it's made me weary of seemingly cheap stocks in other parts of the renewable industry. Namely, GT Advanced Technologies and Power-One , who look cheap on most valuation metrics and also have promising businesses. But, the market isn't giving them a decent earnings multiple because conditions can change very quickly; judging by their performance, it's a good thing I didn't buy in. 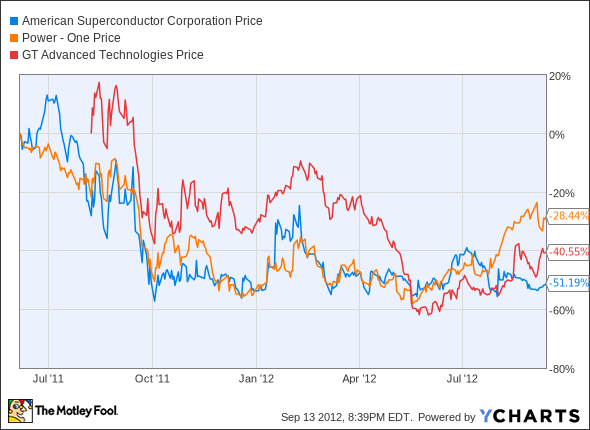 Second, I've become very concerned about companies that rely on IP in China. This is what really brought American Superconductor down and is a huge risk for American companies.

Third, don't rely on a single customer, especially one in China. If American Superconductor was more diversified the loss of Sinovel wouldn't have been such a big deal, but clearly they weren't.

Last but not least, watch what your real exposure is to a stock, especially if you're buying or selling options. I could have reduced my risk by either eliminating my option position or protecting myself from downside risk more.

This energy pick clearly didn't work for me and this is one example of why you should tune in on Sept. 25, as we're taking a day to celebrate the art of investing and we encourage your participation. Take a look at InvestBetterDay.com now and get started on the path to personal prosperity.