Positive news from the Japanese central bank and the U.S. housing sector have buoyed the markets today. Halfway through trading, the Dow Jones Industrial Average (DJINDICES:^DJI) is up nearly 50 points, or 0.36%. If these gains hold until close, it will be the sixth day out of the last seven that the index has advanced.

Japanese central bank joins the party
Early today, the Bank of Japan announced its decision to expand the country's ongoing monetary easing policy. The central bank will increase the total size of the program by 10 trillion yen, or $126 billion, to a total of 80 trillion yen, or $1.01 trillion. According to the bank's press release (link opens PDF file), "These measures in pursuit of powerful monetary easing will make financial conditions for such economic entities as firms and households even more accommodative by further encouraging a decline in longer-term market interest rates and a reduction in risk premiums." Following the announcement, currency traders sent the Japanese yen hurtling downward by more than half a percent. 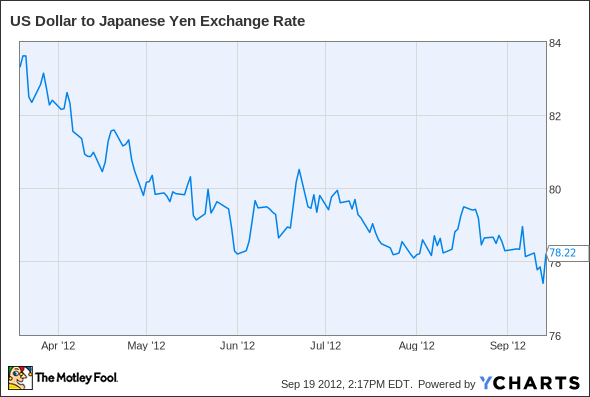 The BOJ's move follows similar actions by central banks in the United States and Europe, prompting commentators to accuse the institutions of waging a currency war through competitive easing. At the beginning of the month, the European Central Bank announced its decision to initiate an unlimited bond-buying program designed to relieve pressure from countries like Spain and Italy, both of which have seen their borrowing costs rise over the last few years. And at the end of last week, the U.S. Federal Reserve followed suit, initiating what amounts to a third round of quantitative easing, under which the central bank will purchase $40 billion a month in mortgage-backed securities until the labor market improves "substantially."

Currency war or not, it's common knowledge that easing monetary policy fuels equity prices. Following the news, the Nikkei 225 -- the most widely quoted index of Japanese stocks -- ended the day higher by 108 points, or 1.19%.

Evidence of a housing recovery accumulates
The U.S. Department of Commerce released upbeat figures this morning, suggesting that the nascent housing recovery continues to gain traction. The data shows that construction of single-family homes reached the highest level in more than two years. Total housing starts, which also include multifamily developments, increased 2.3% last month over July, equating to a seasonally adjusted annual rate of 750,000. According to The Wall Street Journal, on a year-over-year basis, single-family construction is up 27%. Alternatively, building permits, an important leading indicator for the housing market, slipped 1% month over month to an adjusted annual pace of 803,000. 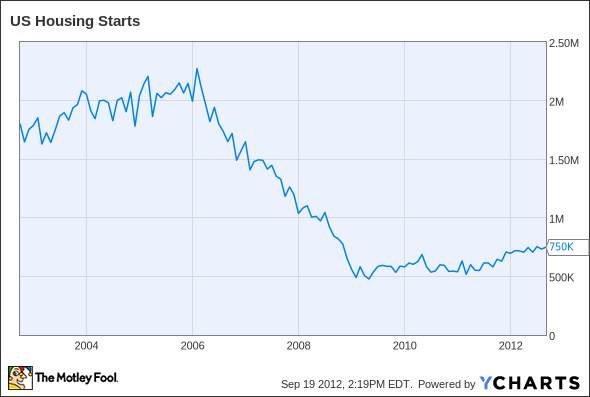 Also today, the National Association of Realtors released its estimates for existing-home sales and prices. The association's press release indicates that total existing-home sales rose 7.8% to a seasonally adjusted annual rate of 4.82 million in August. This is up from 4.47 million in July and is 9.3% higher than in August of 2011. In addition, for the sixth consecutive month, the national average existing-home sale price rose 9.5% on a year-over-year basis to $187,000. According to the association's chief economist, "The housing market is steadily recovering with consistent increases in both home sales and median prices."

Dow's winners and losers
A majority of Dow stocks are currently up in intraday trading, with less than a third in the red.

Leading the way higher are popular entertainment company Disney (NYSE:DIS) and home improvement retailer Home Depot (NYSE:HD). While the latter's performance is expected given the positive news out of the housing sector, the former's is likely the result of news that J. C. Penny (OTC:JCPN.Q) plans to open more than 500 boutiques this fall featuring Disney merchandise exclusive to the retailer.

Leading the day's losers is Hewlett-Packard (NYSE:HPQ), the personal-computer maker that's struggling to reinvent itself in the face of waning demand for its wares. According to my colleague Rick Munarriz, "It's never too late to begin the reinvention process, but [HP] may be biting off more than it can chew this time." The company's stock is currently down by 0.82%.

3 Dow stocks dividend investors need
Because investing can often be a nerve-racking experience, it's sometimes nice to own stocks that you don't have to worry about and that pay a great dividend. For a list of three fitting this description, simply download our most recent free report by clicking here now.