If you're an investor in either Annaly Capital Management or Chimera Investments , then alarm bells should be ringing.

At the end of last week, Chimera issued a disturbing press release notifying investors that it had "received a four-month extension for continued listing and trading of the company's stock on the New York Stock Exchange." The extension gives the mREIT until the middle of this upcoming January to restate essentially every annual and quarterly financial statement the company has filed with the SEC.

Although the market shrugged this off, as Chimera is trading only marginally lower since the announcement, I'd be doing investors a disservice if I didn't communicate how serious I believe this is. Despite unconscionable analyst upgrades, Chimera may very well be on its deathbed, and given Annaly's role in the accounting improprieties, I think its integrity is no longer beyond reproach, either.

Why is Annaly involved?
You may be wondering at this point why Annaly has found itself tarnished by the misdeeds of Chimera. The reason is, at least for the purposes at hand, these two companies are one and the same.

In 1994, Annaly's chairman and chief executive officer Michael Farrell founded FIDAC, a registered investment advisory company that specializes in managing residential and commercial mortgage loans and securities. Annaly, which was also founded by Farrell, acquired FIDAC in 2004 and positioned it to lead the company. According to Annaly's official depiction of its corporate hierarchy: "The team that manages Annaly plays the same roles at FIDAC." And to connect the final dot, "FIDAC manages various investment vehicles including ... Chimera."

What did Chimera do?
For investors who have followed this story, it may be tempting to accuse me of mischaracterizing an otherwise innocent accounting irregularity. According to Chimera's press release announcing the necessary adjustments: "The restatement is not expected to affect the company's previously reported GAAP or economic book values, actual cash flows, dividends, [or] taxable income for any previous period." In other words, no harm, no foul.

But once you dig further into the press release, it becomes difficult to accept that Chimera's years of misstatements were caused by a simple misunderstanding of accounting standards. Namely, almost all of the errors worked in Chimera's favor. Interest income was overstated by $411 million, or 28%. Losses related to the impairment of assets was originally stated as $190 million, when the figure is actually closer to $484 million. And "net income ... is expected to decrease by approximately $695 million from approximately $1.06 billion to $367 million." In case that last number didn't sink in, net income for the period will be reduced by a staggering 70%.

These aren't immaterial, rounding errors. They cut to the heart of Chimera's economic and financial viability. Most disturbing is the resulting incongruity between restated earnings and dividends paid. Under the original accounting, for the time periods at issue, Chimera recorded $1.06 billion in net income and paid out $1.13 billion in dividends. Under the revised earnings, while its dividends didn't change, Chimera recorded a mere $367 million in earnings.

What gives?
You may be wondering how Chimera financed the nearly $1 billion difference between net income received and dividends paid. If so, then you're not alone, as I'm wondering the same thing.

In the past, Chimera and Annaly have argued that investors shouldn't rely on GAAP net income, but rather on their own in-house, subjective estimate of so-called "economic net income," which purportedly accounts for fluctuations in the value of their MBS portfolios. While this now probably goes without saying, in light of the shocking magnitude of the announced restatements, neither Annaly nor Chimera should remain entitled to such deference.

Looking at the situation objectively, in turn, it seems likely that Chimera used proceeds from new stock issues to finance these distributions. As you can see in the chart below, during the three years that Chimera paid out $1.13 billion in dividends while realizing only $367 million in net income, its outstanding share count ratcheted up from only a few million to over one billion. 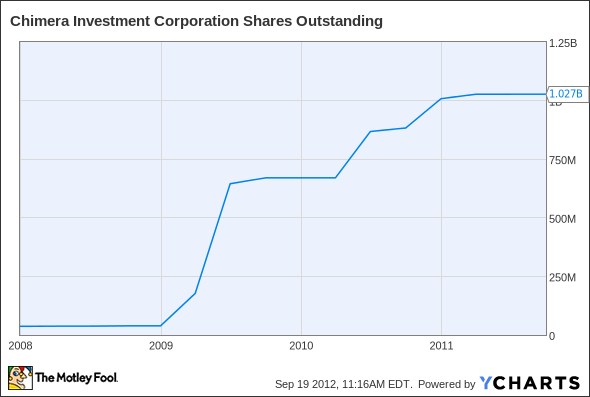 Where there's smoke, there's often fire
In 1994, Annaly's founder, chairman, and chief executive officer, the aforementioned Michael Farrell, was censured and had his securities license suspended by the NASD, the predecessor to FINRA, for failing to "maintain its minimum required net capital," filing "incomplete and inaccurate annual audit reports," and failing to "maintain accurate books and records."

In light of the egregious "errors" committed by Chimera, one can't help but wonder if a pattern has emerged. As a result, I'd urge all investors in both Annaly and Chimera to think long and hard about the continued viability of business models predicated on the facts above.