The Dow Jones Industrial Average (DJINDICES:^DJI) contains 30 of the best-known and most successful companies in the world. They build the airplanes we ride on, serve us millions of hamburgers every day, and bring us the Internet on the devices they assemble.

But while their distinct identities are often usurped by inclusion on the index, all of the Dow's components offer investors unique opportunities and exposure. With this in mind, this article series provides a cursory update on each of the 30 stocks included on the storied index.

Boeing (NYSE:BA)
It's been a trying year for both Boeing and its shareholders. As you can see in the chart below, shares in the aerospace company are down more than 2% since the beginning of 2012, underperforming the Dow by nearly 12 percentage points over the same time period. 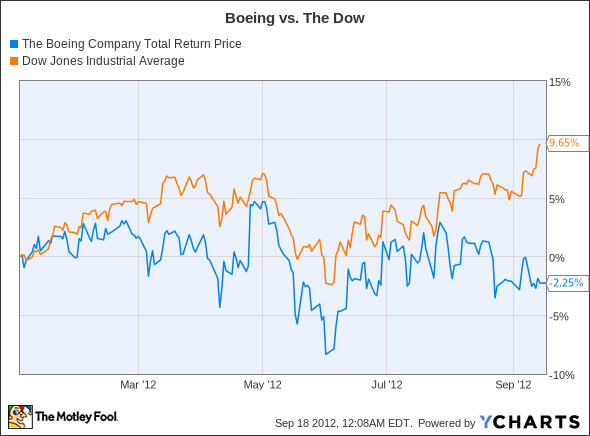 The explanation for this underperformance is twofold. First of all, both the domestic and global economies appear to be headed for a slowdown. Manufacturing data in the United States indicates a contraction, Europe continues its debt-laden economic descent, and even China is evidencing signs of malaise. It goes without saying that such an environment is particularly burdensome for a company that manufacturers multimillion-dollar airplanes.

And secondly, investors remain concerned about the impending fiscal cliff, a series of federal tax increases and spending reductions set to take effect at the beginning of next year. According to my colleague Dan Newman, if Congress doesn't act, then the Department of Defense's budget will decrease by 10%. This would be an unwelcome development for a company like Boeing, which looks to the U.S. military for roughly half of its sales.

Of course, it isn't all bad news. The biggest silver lining concerns the company's recently revised predictions for future growth in Asia. Earlier this month, Boeing increased its estimate of how many commercial airplanes Chinese carriers will buy over the next 20 years. It originally expected demand for 5,000 aircraft but now thinks it will be closer to 5,260. In addition, Boeing predicts that carriers in India will need 1,450 planes by 2031. Taken together, these figures equate to nearly $850 billion in orders.

Foolish bottom line
Given Boeing's recent performance, it's easy to articulate both bull and bear scenarios for the company going forward. On one hand, it trades for only 12 times earnings and yields a respectable 2.5%. On the other hand, if the global economy doesn't pick up, then it wouldn't be unreasonable to see Boeing's share price decline further. Either way, I believe investors would be better off investing in one of the companies identified in our free report: "The 3 Dow Stocks Dividend Investors Need."