A majority of Brazilian stocks that trade on U.S. exchanges were down today. Here's why.

It was revealed yesterday that the potential for further monetary stimulus by Brazil's central bank was no longer a viable tool to spur economic growth in the South American country. The reason? Its previous efforts at doing so have seemingly been too successful, driving expected inflation for the year to 5.3%, well above the central bank's 4.5% target rate.

Despite the possibility of monetary weaning, Brazil's market climbed higher yesterday, as its benchmark index, the Bovespa , closed up by nearly 1%. If today's performance is any indication, however, it seems clear that traders have gotten the message. At roughly halfway through the trading day, the Bovespa was down nearly 2%.

Best- and worst-performing Brazilian stocks
Currently, 17 of the 27 Brazil-based companies that trade on U.S. exchanges are in the red, with the remaining 10 trading higher.

The biggest loser on the day, Companhia Siderurgica Nacional , finished down more than 8%. Because SID is in the commodities business -- it operates as an integrated steel producer throughout Brazil and Latin America -- news that Brazil's central bank could move to stymie inflation is extremely troublesome. In the first case, it would probably decrease the price of steel that it sells to customers. And in the second and related case, it would decrease demand for steel by clamping down on the credit available to SID's customers.

Nevertheless, Jonathan Yates, a member of The Motley Fool Blog Network, recommends SID to investors as one of three solid stocks based in a country that multiple hedge fund managers such as George Soros and Ray Dalio are pouring money into. The other two companies on Yates' list are oil producer Petroleo Brasileiro SA and the industrial minerals and mining company Vale SA . All three of these companies are up by, or nearly, quadruple percentage points in the past decade -- though, it should be noted that all three are now experiencing multiyear corrections. 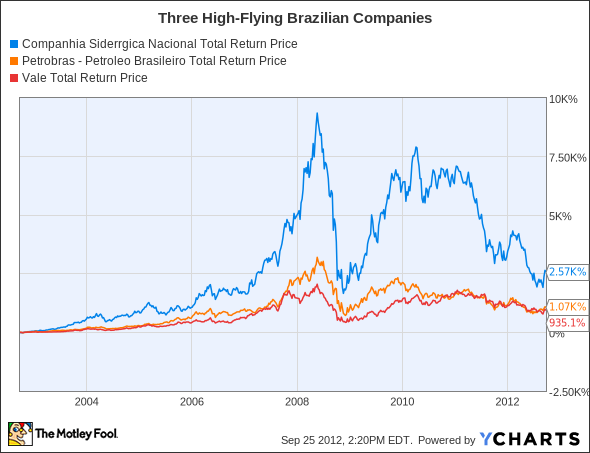 Yates' inspiration came from former President Clinton's recent statement: "If I were just sitting in a room betting on the future of rising countries, I'd bet on Brazil first." Clinton made the statement at a gathering of bankers in Sao Paulo. According to the news agency Reuters, he went on to note that Brazil "compared favorably to India, which is struggling with a stagnant economic reform agenda, and China, which has tensions with some of its neighbors and is at risk of suffering from water scarcity and other depletion of natural resources."

Heading higher, alternatively, is Companhia Paranaense de Energia , a utility company that engages in the generation, transmission, distribution, and sale of electricity primarily to customers in the Brazilian state of Parana. In intraday trading, ELP shares were up by more than 2% and finished up more than 1.3%. For investors tempted by this uptick, however, a word of caution is probably appropriate, as the move comes in the midst of a larger downward trend in ELP's stock. Since the beginning of the year, for instance, its share price has declined by nearly 20%.

Keep it simple with three dominating American companies
While Clinton's statements about Brazil seem credible, investing in a foreign country remains fraught with peril. As we've seen in the past, Brazil has a history of struggling to maintain both monetary and financial stability. It's for this reason, in turn, that the safest and most prudent course of action for investors is to load up on U.S. companies that are beyond reproach. Three such companies are discussed in our recent free report: "3 American Companies Set to Dominate the World." To download this free report instantly, simply click here now.

Fool contributor John Maxfield has no financial stake in any of the companies mentioned above. Motley Fool newsletter services have recommended buying shares of Petrobras. We Fools don't all hold the same opinions, but we all believe that considering a diverse range of insights makes us better investors. Try any of our Foolish newsletter services free for 30 days. The Motley Fool has a disclosure policy.

What to Expect from Petróleo Brasileiro SA - Petrobras