Shares of Pfizer hit a 52-week high last week, which is in line with the performance of many of its peers over the past year. Let's look at what's driving these gains to better understand what the future holds for this company.

How it got here
The past year has been a pretty good one for shareholders of the larger drugmakers. Pfizer's performance has matched that of Merck over the 52-week period, and until Gilead Sciences took off following bullish analyst comments on its new HIV drug, it too had been on the same path. Gilead's fellow biotech heavyweight Amgen is also dancing in the range of 50% year-over-year gains: 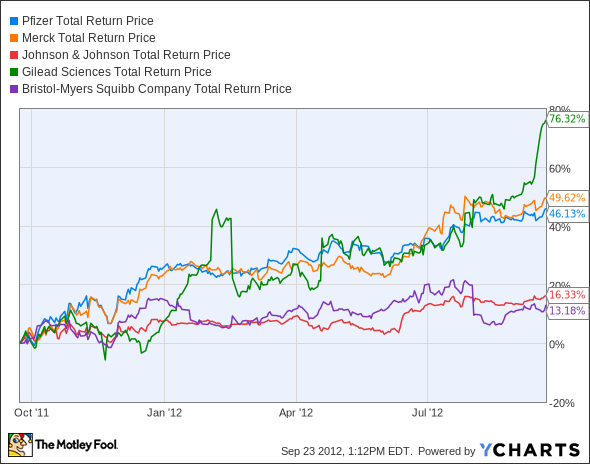 Johnson & Johnson has lagged over the past year as investors grapple with whether the company's historically stable dividend is worth the risk of potentially poor forward growth. That's something Pfizer shareholders should be keenly aware of, since it faces a steep patent cliff in the next few years. In fact, the stability of these drugmakers' dividends may be driving the entire group to higher prices, as every company but Merck has seen its stock's P/E grow by at least 25% over the last year: 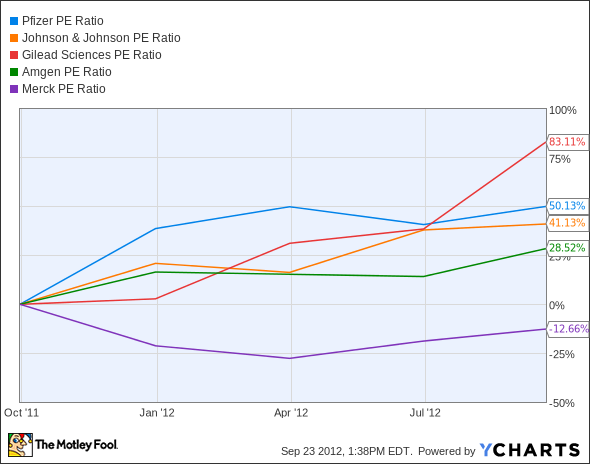 Pfizer's current P/E is fairly consistent with its five-year average, but is higher than the sub-15 P/Es its stock regularly earned before 2011. To make sure that this isn't anything to worry about, we'd better dig into some key stats for both Pfizer and its peers.

What you need to know
Pfizer's P/E is one of the cheapest in this group, but only by a narrow margin:

The patent cliff is an obvious threat, but Pfizer's growth may be further crimped as it sells off its animal health subsidiary as Zoetis next year. There are some drugs coming through the pipeline that could blunt the impact of these drop-offs, most notably those treating chronic myeloid leukemia and rheumatoid arthritis, and a potential blockbuster blood thinner. My fellow Fool Keith Speights doesn't see anything stepping into Lipitor's big shoes, which might drop Pfizer's actual growth rate into the red with Merck's.

What's next?
Falling off a cliff is never a joke, but Pfizer shareholders seem to think they've got parachutes strapped to their backs as they step to the edge. The company's 62% dividend payout ratio is a bit high for comfort, especially with the risk of reduced earnings ahead. Pfizer's managed to keep profit stable even as revenue declines, but there's only so much efficiency to be squeezed out of a system that's soon to have potent generic competition.

Interested in tracking this stock in the months and years ahead? Add Pfizer to your Watchlist now, for all the news we Fools can find, delivered to your inbox as it happens. Pfizer's dividend might be in danger, but you don't have to go over the patent cliff with its payouts. To discover three great dividend stocks that don't have any cliffs to cross, check out the Fool's latest free report. It's got everything you need for an informed buy, and you can claim this important information at no cost by clicking here.