Every investor can appreciate a stock that consistently beats the Street without getting ahead of its fundamentals and risking a meltdown. The best stocks offer sustainable market-beating gains, with improving financial metrics that support strong price growth. Let's take a look at what Reynolds American's (RAI) recent results tell us about its potential for future gains.

What the numbers tell you
The graphs you're about to see tell Reynolds American's story, and we'll be grading the quality of that story in several ways.

Growth is important on both top and bottom lines, and an improving profit margin is a great sign that a company's become more efficient over time. Since profits may not always reported at a steady rate, we'll also look at how much Reynolds American's free cash flow has grown in comparison to its net income.

A company that generates more earnings per share over time, regardless of the number of shares outstanding, is heading in the right direction. If Reynolds American's share price has kept pace with its earnings growth, that's another good sign that its stock can move higher.

Is Reynolds American managing its resources well? A company's return on equity should be improving, and its debt-to-equity ratio declining, if it's to earn our approval.

Healthy dividends are always welcome, so we'll also make sure that Reynolds American's dividend payouts are increasing, but at a level that can be sustained by its free cash flow.

By the numbers
Now, let's take a look at Reynolds American's key statistics: 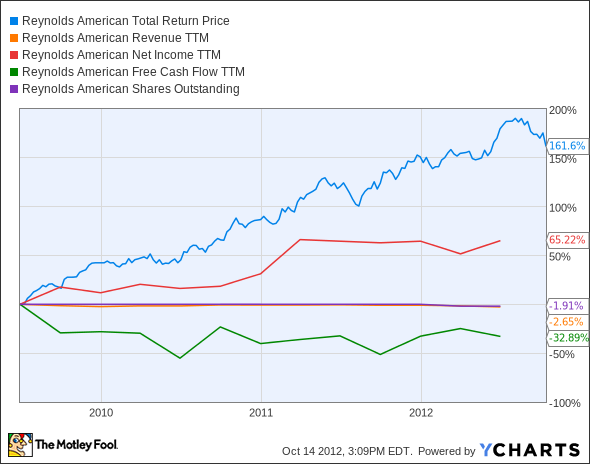 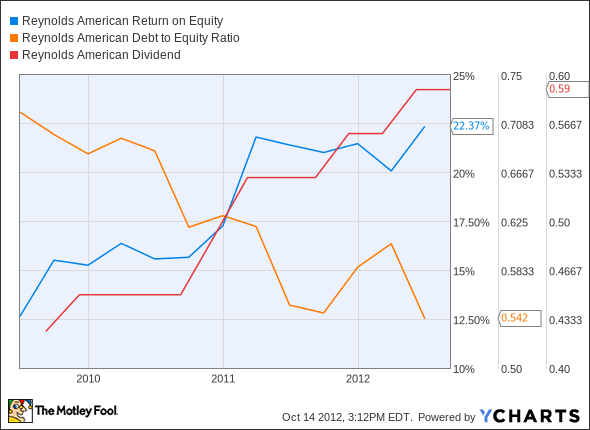 How we got here and where we're going
It's not easy to grow in a rather closed sales environment, but Reynolds American has made a go of it. The company earns five of a possible nine passing grades thanks to its ability to squeeze more profit out of a shrinking market.

American tobacco companies have been beaten up by some of our Foolish contributors this year, as the downsides of buying into a market the government wants to shrink become more evident. Big Tobacco's relationship with the feds has gotten so combative that Reynolds American and Lorillard (LO.DL) have teamed up to defend their packaging rights in court as the FDA demands prominent graphic warning labels for cigarette packs. Altria (MO -0.48%) isn't in the suit, but that could be seen as either simple capitulation or savvy manipulation of competitors' resources. Both Altria and Reynolds American have been forced to slash payroll counts to keep margins high, and these embattled sin-slingers need to conserve as many resources as possible.

You might think that international tobacco companies are better insulated, but an Australian anti-tobacco initiative could be the beginning of a worldwide clampdown, turning safe-dividend standouts British American Tobacco (NYSEMKT: BTI) and Phillip Morris International (PM -0.67%) into offshoots of the same endangered species as their American cousins. At least they still have diverse markets. Reynolds American and its domestic peers are stuck here, where smoking rates have been cut in half since the '60s despite population growth of more than 100 million .

Price increases have built the lion's share of Reynolds American's growth recently, making it vulnerable to competition from low-cost alternatives like Vector Group's (VGR 1.65%) discount brands. Reynolds American's Newport is resisting this shift, as my fellow Fool Sean Williams notes -- but there's no guarantee this resistance will continue. Declining smoking use will be a bigger problem per quitter with every price raise, and Reynolds American is already struggling to generate enough cash flow to pay out promised dividends.

Putting the pieces together
Reynolds American has some of the qualities that make up a great stock, but no stock is truly perfect. Digging deeper can help you uncover the answers you need to make a great buy -- or to stay away from a stock that's going nowhere.