Shares of Apollo Group (NASDAQ:APOL) hit a 52-week low today. Let's look at how it got here and whether clouds are ahead.

It's been a long ride down for Apollo shareholders as the stock has lost more than 60% of its value since the beginning of the year. Shares fell 22% Wednesday after a foreboding earnings report that included a 14% drop in enrollment, cuts in 2013 guidance, and the closing of 115 locations and laying off of 800 staff members. As the chart below shows, Apollo isn't the only for-profit school struggling. Hard times have fallen on the industry. 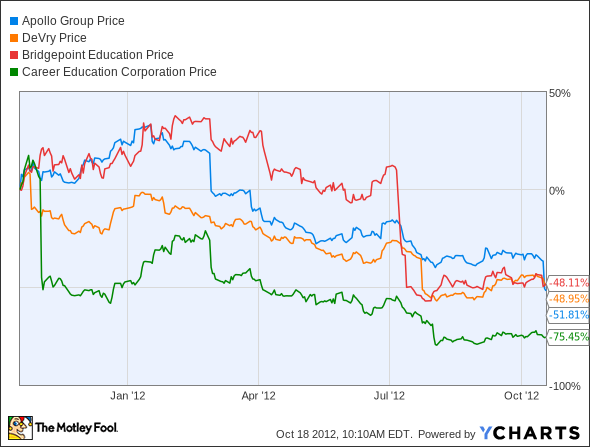 All four of the stocks, including Devry (NYSE:ATGE), Bridgepoint Education (NASDAQ:ZVO) and Career Education (NASDAQ:PRDO), have essentially fallen 50% or more. In many ways, these drops are a direct result of tighter regulation from the government, which found these schools to have underwhelming graduation numbers while loading students with heavy debt burdens at the same time. The schools profit by enrolling applicants who borrow money from the government to pay for school.

In the case of Apollo Group, the effects of those laws have ricocheted through its financial reports and updates. Its stock fell 16% in February when it dialed back guidance, and it has continued to slide from there as enrollments turned out to be worse than it had predicted back then.

A series of downgrades and guidance cuts followed over the course of the year, and the government stepped up its criticism of the for-profit education sector. A Senate report released over the summer revealed that these schools generally spend more on marketing than instruction, and legislators promised increased oversight to prevent students and taxpayers from getting shortchanged.

What's next?
Apollo is still putting up strong profits and has actually beat EPS estimates in its last four quarters, but the overall trend does not favor it or its fellow for-profits. At a P/E of 6, the stock may look cheap, but investors would be better off waiting for the effects of the government crackdown to shake out. At the very least, I would wait for enrollments to begin rising again, as new students are the lifeblood of the industry. As long as those numbers are headed down, the stock will not be able to recover.

For-profit college stocks had a meteoric rise in Wall Street, but it seems like their downfall could be just as abrupt. Apollo, the biggest company in this sector, was once worth more than four times what it is now and had a market cap higher than $10 billion. Its share price has not been this low in more than 10 years. For for-profit investors, this could be a sign that school is out for good.