These three companies could be the next addition to one Fool's Roth IRA.

For well over a year now, I've been doing my best to help the world invest better. You see, every month, I publicly call out five stocks that I'm considering adding to my Roth IRA; next week, I'll let you know which stock made the cut.

So far, my monthly picks have returned about 8%, just about matching the S&P 500 return over the same time frame. Read below to find out what three stocks I'm thinking about buying and why, and at the end I'll be offering up access to a special free report detailing how you can prepare for next month's presidential election.

Westport Innovations ( WPRT -4.31% )
Though natural gas prices have inched upward since hitting rock-bottom earlier this year, the commodity is still cheap in a historical context. That's important for Westport, which designs natural gas engines that can be used in cars, trucks, and other heavy machinery.

I've had my eye on adding to my position in this company for some time now, but two things keep holding me back: concern that a manufacturer could design its own engine, and the possibility that natural gas isn't the fuel of the future. As far as the former goes, one of Westport's current partners in a joint venture -- engine-maker Cummins ( CMI 0.53% )has already started exploring its own design options.

With companies like General Electric and Chesapeake Energy ( CHKA.Q ) coming together to put "CNG [compressed natural gas] in a Box," it's clear that a network may be taking hold to boost the viability of natural-gas-fueled vehicles in the not-so-distant future.

But if anything makes me think owning at least a little of such a company might be worth it, it's this graph, which shows the expected cost of a gallon-gas equivalent of gasoline and diesel compared to natural gas. 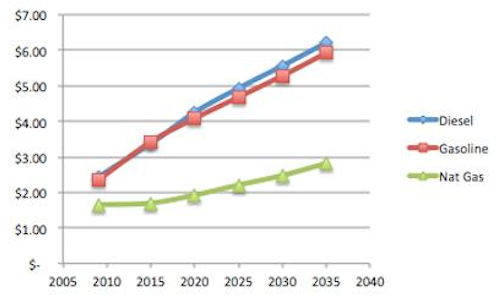 Amid all the doom and gloom, I beg to offer a different viewpoint. Yes, the company's cost-per-click came in 15% lower than the same time last year, but a greater mix of mobile ads and unfavorable foreign currency headwinds had a lot to do with it. And though cost-per-click may have been down by 15%, there was a 33% increase in overall clicks. In other words, volume more than made up for the difference.

Backing out the contribution from Motorola, the core Google business grew revenue by almost 19% over the third quarter last year -- that's a healthy clip for such a large company. I'm also not concerned with the company continuing to invest heavily in its future -- as I trust Larry Page to do what's best for the company over the long run.

LinkedIn ( LNKD.DL )
Finally, I'm considering a company I've already bought for my Roth IRA. Back in February, the stock for this business-networking company sat at around $87. Today, that total sits about 20% higher, but I still believe in LinkedIn's long-term potential.

The company will be coming out with third-quarter earnings on Nov. 1, but a look at the year so far shows a company with several revenue streams that are quickly growing. Take a look at the growth of revenue in the company's three divisions during the first six months of 2012.

With the company just starting to scratch the surface internationally, there could be lots of potential for shareholders willing to hold on for the long haul.

Which will it be?
Tune in next week to find out which of these three companies will be my purchase for this month.

These 2 Stocks Doubled and Still Have Room to Go