Goldcorp's earnings suggest a potential recovery rally in the making.

Like those freaky metallic androids from Schwarzenegger's pre-gubernatorial film franchise, Goldcorp's (GG) wounds will heal quickly. And if the similar healing processes of its peers offer any indication, the result could be one powerful stock surge that Foolish investors may not want to miss.

Goldcorp's third-quarter earnings portray a quality miner getting back on its feet following a spate of unfortunate setbacks, and provide a timely reminder of the underlying investment thesis that became cheaper to execute as a result of those setbacks. Already on Thursday, the stock has vaulted higher by 6%! The company reported adjusted net earnings of $441 million that came in just $0.02 per share (4%) beneath the prior-year mark of $0.56 per share. Of that $441 million, $109 million (25%) went straight to shareholders through the company's monthly dividends despite the ongoing capital requirements of a monumental growth spurt in the making.

Gold production came in nearly 4% higher than the relatively dismal second quarter, but what really commands attention is the meaningful 31% sequential increase in silver production (to 8.5 million ounces) over the 6.5 million ounces produced during the second quarter. Foolish followers of Goldcorp -- as well as those of silver stream holder Silver Wheaton (WPM -2.27%) -- will recognize that such a sudden silvery surge can only mean that the critically important Peñasquito mine is getting back on its feet. Indeed, Goldcorp achieved record production volumes for both gold and silver "despite the continued impact of water shortages from lower well field production." The company continues to develop additional water wells and assess potential longer-term solutions, but in the meantime it's very encouraging to see the mine achieve record output and permit Goldcorp to confirm its previously revised 2012 guidance.

As I discussed in my earnings preview, all eyes were on the Red Lake operation after Goldcorp's two-pronged challenges that were revealed over the summer. With respect to previous encounters of "inconsistent mineralization" within the mine's Footwall Zone, I took as a positive signal that Goldcorp encountered mineralization during the third quarter that was "as expected." The company managed to complete the previously delayed de-stressing work to access the important High Grade Zone, and discovered a new area of mineralization adjacent to it that will enhance flexibility if those sorts of safety-related "seismicity" challenges rear their heads again. The company continues to assess this issue as well, and I suspect that we can look for some further clarity sometime during the first half of 2013.

On the all-important growth front, Goldcorp issued positive updates on nearly all of its ongoing mine construction projects. The Pueblo Viejo joint venture with operator Barrick Gold (GOLD -2.76%) continues to shape-up nicely after achieving its delayed first-pour in August, and Cerro Negro remains "on track" for first production in the latter part of 2013. The five kilometer haulage drift to connect Cochenour to the Campbell complex at Red Lake is 60% complete, and four exploration drills are busily reaching for gold within that highly prospective trend. Meanwhile, the El Morro joint venture with New Gold (NGD -4.92%) remains in an unfortunate state of limbo while we await the outcome of challenges to the project's previously issued environmental permit.

Mining for gold is a difficult and risk-riddled endeavor to begin with, and gold investors are well accustomed to the sorts of setbacks that not even a high-quality outfit like Goldcorp can avoid. But as Goldcorp continues to address its several recent challenges, I see the makings for a potential recovery rally along the lines of what we witnessed from shares of Agnico-Eagle Mines (AEM -3.92%) following that company's well-documented bout with a spate of operational setbacks. After reminding readers to track my ongoing coverage of Goldcorp and other miners by bookmarking my article list or following me on Twitter, I will let the following six-month chart of Agnico-Eagle Mines speak for itself. 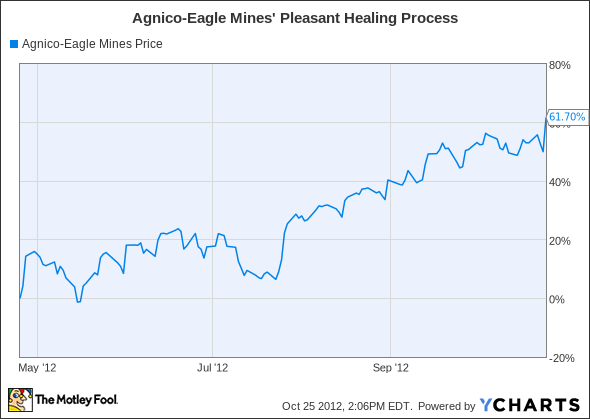 Fool contributor Christopher Barker owns shares of Goldcorp and Silver Wheaton. The Motley Fool has no positions in the stocks mentioned above. We Fools may not all hold the same opinions, but we all believe that considering a diverse range of insights makes us better investors. The Motley Fool has a disclosure policy.