One important storyline coming out of Apple's (AAPL 2.62%) ho-hum earnings release last night was its guidance. While Apple notoriously lowballs its guidance, the figures that CFO Peter Oppenheimer provided on the conference call last night would actually call for negative earnings growth next quarter. Can it be?

Say it ain't so
Revenue in the December quarter is expected to be $52 billion, with a gross margin of approximately 36%, which would translate into a gross profit of about $18.7 billion. Operating expenses were guided to just over $4 billion, including $485 million of stock-based compensation expense, compared to last year's figures of $3.4 billion and $357 million, respectively. 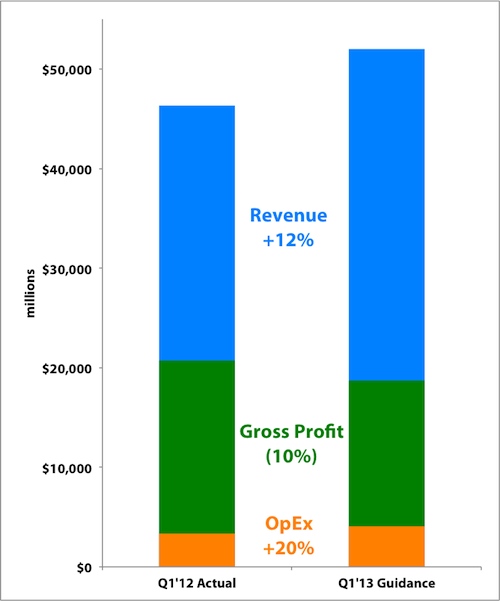 Every single one of those figures except for revenue would be worse than a year ago, which was Apple's current record quarter in terms of both top and bottom lines. That guidance would represent gross margin contraction of nearly 9%, which would translate into 10% less gross profit in dollar terms.

By the time we get to the bottom line, Apple is targeting earnings per share of $11.75, well below the $13.87 per share last time around.

Undone
Let's dig into what would drive these changes at the heart of Apple's income statement.

Whenever Apple releases dramatically new products, i.e., what it's been doing for the past six weeks, gross margins are weak in the beginning of those product cycles as the company is starting at the height of the cost curve before manufacturing and other operating efficiencies can take hold. That's particularly evident when you consider the increasing complexity of the Mac maker's manufacturing processes.

This is par for the course with any new product launch for any company. The only difference for Apple this time is that it's never launched this many redesigned products simultaneously within such a short period of time, so those effects will be magnified. The good news is that those manufacturing processes yield higher build quality than the competition.

For example, The Verge said that Google's (GOOGL 2.63%) Nexus 7 and Amazon.com's (AMZN 3.53%) Kindle Fire HD "feel like toys" when compared to the iPad mini. Those two leading Android tablets are specifically geared toward the lower-end of the market and the search and e-tail giants were aiming to keep costs down, so they inevitably won't feel as solid as what Cupertino puts together.

On the operating expense side, I would expect growth in research and development expenses to outpace the increase in selling, general, and administrative costs, as it's been doing for the past several quarters. 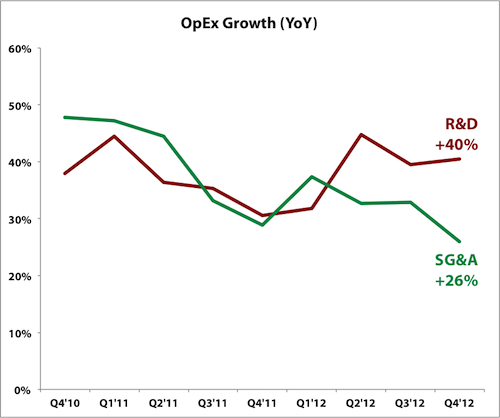 SG&A comprises a much larger portion of operating expenses, so growth there goes a long way. However, continued innovation costs R&D dollars, and investors shouldn't complain about spending where it counts, especially since Apple spends far less on R&D as a percentage of revenue relative to its rivals.

In fairness, Microsoft's figures look high because it's been spending more heavily on developing Windows 8 recently, its biggest launch in years, and its GAAP revenue reported last quarter was low due to a large portion of deferred revenue related to its Windows Upgrade Offer, Windows 8 pre-sales to OEMs, and Office Offer. Still, R&D was still 14.2% of non-GAAP revenue, which included adjustments for these deferrals.

Another thing that Oppenheimer pointed out was that the previous December quarter had a 14th week, while the current one only has 13, throwing off the year-over-year comparison slightly.

Only in dreams
Ultimately, here's what investors can be confident on happening in Cupertino next quarter: Apple will beat its earnings guidance, sell more iPhones and iPads than it's ever sold before, book more revenue than it ever has before, and throw an iDance party.

Evan Niu, CFA, actually can't say for sure if Apple will host an iDance party or who may be in attendance. He owns shares of Apple. The Motley Fool owns shares of Apple, Amazon.com, Google, and Microsoft. Motley Fool newsletter services recommend Apple, Amazon.com, Google, and Microsoft. Try any of our Foolish newsletter services free for 30 days. We Fools may not all hold the same opinions, but we all believe that considering a diverse range of insights makes us better investors. The Motley Fool has a disclosure policy.