In that spirit, we three Fools have banded together to find the market's best and worst stocks, which we'll rate on The Motley Fool's CAPS system as outperformers or underperformers. We'll be accountable for every pick based on the sum of our knowledge and the balance of our decisions. Today, we'll be discussing whether online marketplace and mobile payment provider eBay (NASDAQ:EBAY) is still a top stock.

eBay by the numbers

Here's a quick snapshot of eBay's most important metrics to better acquaint you with the company:

Sean's take
What we have with eBay are two very divergent business paths.

On one hand, eBay is a marketplace leader, on par with Amazon. In its most recent quarterly report, released last week, we saw that gross merchandise volume (excluding auto sales) increased 11% to $16 billion as efforts to enhance the customer experience and push users toward mobile applications have proven worthwhile.

Similarly, GSI, which it purchased in 2011, is fitting in nicely as eBay pushes its marketplace influence toward larger retail customers. GSI Commerce helps manage the websites and online marketing campaigns for Aeropostale and Kenneth Cole, as well as handles payment processing and order management services. Same-store sales in this operational segment rose 19% over the previous year.

The other side of the coin is eBay's payments business, heralded by PayPal. As an online payment system, PayPal is surpassed by none. However, as a mobile payment system, it's receiving one heck of a challenge from multiple parties.

Privately held Square, which offers card-swiping devices that easily attach to a mobile device, landed a whale of a client in Starbucks (NASDAQ:SBUX) in August. Intuit, with its GoPayment card swiper, and Google, with its still-developing Mobile Wallet, also pose viable challenges to PayPal's mobile dominance. PayPal hasn't exactly rested on its laurels either, announcing a deal with McDonald's (NYSE:MCD) in France and a collaborative deal with Discover Financial Services (NYSE:DFS).

The big question, though, is whether I can get over the fact that eBay's PayPal division is nothing but a glorified idea emulator. eBay's PayPal Here card-swiping device might as well be a carbon copy of Square's device save for the shape and the five-basis-point reduction in fees relative to Square. I'm not saying that emulating a good idea is wrong, but it demonstrates that eBay's approach is reactive rather than proactive.

Taking that into account, I do feel that eBay's marketplace dominance among individual buyers and sellers, its growing clout with big retail, and its online payment hub, PayPal, provide more than enough reason for eBay to head higher. If eBay can continue to foster strong deals to promote PayPal via mobile applications, as well as stave off an aggressive Amazon by focusing on its users' experience, then it shouldn't have any problem growing by low double digits over the coming years.

Alex's take
In the interests of full up-front disclosure, I came into this debate with a strong personal dislike of eBay as a company. As a consumer, I've had more poor experiences with their various services than positive ones. But I'm not investing in my experience; I'm investing in a business. Is that business growing? Are profits improving? The answer to those questions over the past decade has been yes, indisputably: 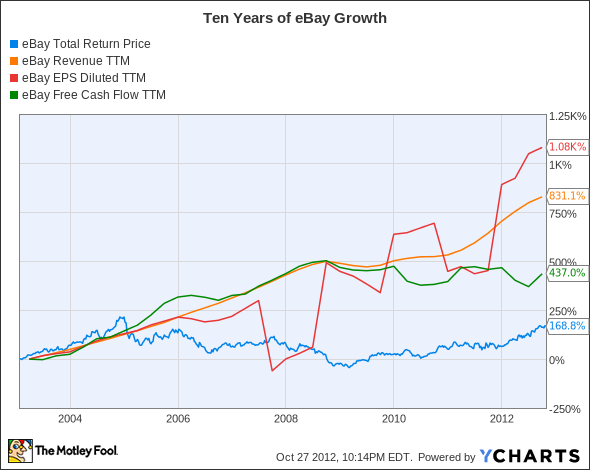 That doesn't look so bad until you zoom closer and find out that most of that growth took place before the recession. In the past five years, the one notable improvement has been in eBay's earnings per share. Everything else, by comparison, is virtually flat: 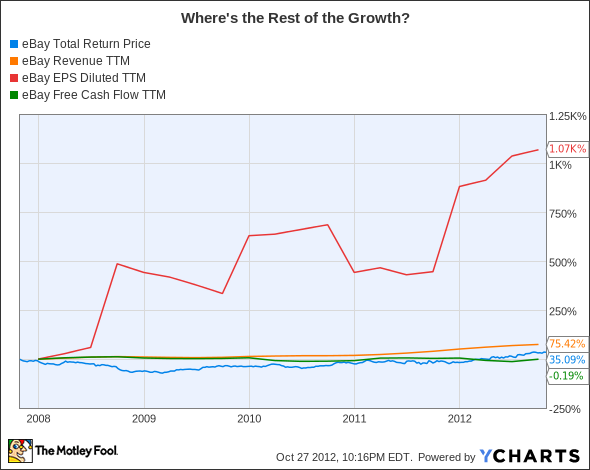 Let's compare eBay to its nearest competitors, both in terms of online sales and in payment processing, to find out:

For all three other companies, P/E and P/FCF tend to move in the same direction. Something else is going on with eBay, so we'll default to free cash flow, which is less prone to accounting games. Right now, eBay's P/FCF ratio is at its highest level in five years. Since free cash flow has been essentially flat for that entire period, virtually all the stock's gains have pushed that ratio higher.

Over this same period, eBay's PayPal segment has grown at an average annual rate (with 2012's third-quarter results annualized for a rough estimate of 2012 total revenues) of 23%, compared to the marketplace segment's average annual growth of 6%. If an increasingly powerful PayPal can't move the needle on free cash flow, what will?

I also want to come back to Sean's note about eBay "focusing on its users' experience." The most recent effort to assess eBay's user experience seems to have come from eBay directly, and was revealed this August after a survey was offered to eBay users in July. eBay refused to provide specific results, offering only several incredibly vague overviews of what users felt were important. PayPal is a "perennial Worst Company in America heavyweight" on The Consumerist, remains one of the most-phished sites (users receive fake emails that hijack their login info)on the entire Internet, and earned the lowest rankings of any major online payment system in an eCommerceBytes survey compiled earlier this year. None of this sounds like a company that focuses on its users' experience.

PayPal will probably continue to be a growth engine for the near future, but it's been one for years and hasn't affected eBay's free cash flow. PayPal's unpopularity with most users makes it vulnerable to any competition that gets big enough to block its growth on mobile commerce. I wouldn't bet against eBay in the short run, but I don't want to bet on it, either. I'll stay on the sidelines here.

Travis' take
eBay is one of the few companies standing from the early days of the Internet, and it shows just how much the Internet has changed. eBay's auction system was all the rage a decade ago and changed the way we sell our used stuff, but today it seems like a forgotten company. It's these fast-moving market dynamics that make me think a broad look at the long-term viability of the company will be more useful than a detailed analysis of the financials. So let's look at the three factors driving eBay.

eBay's original business, the online auction, still has a long-term place in the marketplace because nothing has emerged that can really compare to it. Everyone from a college student to a major retailer can use it, and buyers can find everything from knickknacks to high-end electronics. It's also generated a critical mass of buyers and sellers, which can't easily be replicated. This business may not be as exciting as it was a decade ago, but this is a winner for eBay.

Awkwardly folded into the auction business are also the buy-it-now or new retail items from eBay. These items are similar to those found on Amazon.com but don't carry the same risks because eBay doesn't carry most of the inventory; it leaves that to its retail partners. In essence, eBay leverages its size to let others sell new merchandise and takes a cut of the profit. This business will always be under attack from companies like Amazon, but unlike its high-flying rival, eBay isn't extending its reach into its partners business every chance it can get and eBay can generate higher margins by being a middleman. Online retail may not be a growth engine for eBay, but as with auctions, it has a place going forward.

Finally, we have the PayPal business. If anything should be the future for eBay it would be PayPal, but like Sean and Alex pointed out, eBay isn't exactly taking the lead in mobile payments. In fact, the online business is a dinosaur in the payment market compared to mobile. Personally, I make multiple online transactions per month but I do them all for free through my bank rather than using PayPal. There's no more proof that PayPal is falling behind than the company's recent announcement that it was laying off 325 employees at PayPal and restructuring the business. Again, I don't think PayPal will die, but its business doesn't excite me the way Square does.

eBay has three solid and unexciting businesses at the moment and a stock that could be seen as a value depending on how you look at it. For me, that puts it in a precarious position as an investment. My deciding factor is that I see eBay's best days behind it. eBay can dominate auctions and play a role in online retail and mobile payments, but standing still as an online company is a road to nowhere. I'm not ready to call eBay dead and make an underperform call, but I just don't see the company as a growth engine going forward.

The final call
After our discussion, we've decided that while eBay is a popular destination to buy and sell excess household items, and does hold a clear advantage in online marketplace sales, it has some serious questions to answer with regard to further developing its mobile payments platform. Instead of being a leading innovator, it's chosen to be a reactive emulator, which doesn't exactly sit well with either Alex or Travis (and even Sean to some extent). For now, we'll add eBay to our Watchlist, but there doesn't seem to be a strong enough consensus to make a selection either way on eBay. Don't let that stop you, however, from heading to our TMFYoungGuns CAPS portfolio and checking out our past selections.