It's been a tough week for Cirrus Logic (NASDAQ:CRUS).

First, the company crushed earnings estimates and issued rosy-cheeked forward guidance, only to see its share price plunge as much as 16% the next day. Then the slaughter continued on Friday with another 10% freefall.

The designer of audio and power controller chips for everything from smartphones to garage door openers also said its sales are pretty much unlimited right now. Orders are coming in so fast that Cirrus can't hire qualified engineers quickly enough to take advantage of the rush. "We've got multiple products we wish we could do for every product we're able to staff," said CEO Jason Rhode. It's kind of a nice problem to have, if you ask me.

All along, analysts stayed by and large positive with more upgrades and price target boosts than negative recommendation actions. But still, share prices tumbled.

Some say investors might worry about margin pressures. Largest customer Apple (NASDAQ:AAPL) is known to play hardball with component suppliers, and management did guide to slightly softer gross margins in coming quarters.

But I don't think that theory holds water. Rhode had a perfectly reasonable explanation for the margin squeeze: "We think that nothing has really fundamentally changed about the business. But as I said earlier, the volumes and revenue ramped up quite a lot. So it's not at all surprising that there should be a little bit more pricing pressure that goes with that."

In other words, we're selling tons of chips and our customers are starting to expect volume discounts. Fair enough.

Moreover, the gross margin damage is only a couple of percentage points -- hardly worthy of a 20% blast to Cirrus' market cap.

So what is everybody missing? Well, have a look at this simple chart: 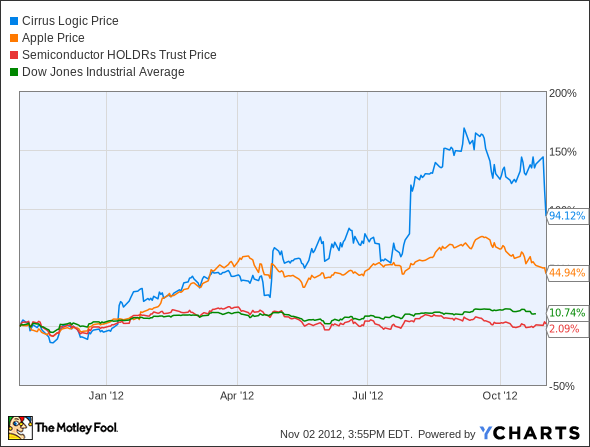 Even after this week's drastic drop, Cirrus has absolutely mauled the markets over the last year. The stock is still up 94%, far ahead of the Dow Jones Industrial Average (DJINDICES:^DJI) at just 11% and chip sector tracker Semiconductor HOLDRs Trust (NASDAQ:SMH) trading essentially sideways. Cirrus even beats sugar daddy Apple, though Cupertino hardly embarrassed itself with a 44% gain.

In short, I think we're looking at a heavy round of profit-taking and rebalancing. Don't forget that we're reaching the end of 2012, which gives many investors reason to rebalance their holdings for tax purposes. There's nothing fundamentally wrong with Cirrus, but the 183% year-to-date gains that the stock recently topped out at may have made some shareholders queasy.