The knee-jerk reaction is an easy "yes."

If President Obama is elected for a second term, we should go ahead and cue the ominous music for the banks, including much-maligned giant Bank of America (NYSE:BAC)? It seems so obvious if you've watched the political ads and listened to the rhetoric.

Is there truth to this assumption? One thing that's for sure is that the banks themselves are rooting for a Mitt Romney victory. As my fellow Fool Amanda Alix pointed out, banks top the list of Romney campaign contributors with Goldman Sachs (NYSE:GS), B of A, Morgan Stanley (NYSE:MS), and JPMorgan (NYSE:JPM) all throwing considerable financial support behind the Republican.

To be fair...
The last four years under President Obama have been far from awful if you were a Bank of America shareholder. Although the stock took a precipitous fall between early 2010 and the end of last year, it's still posted a 93% gain since Obama stepped into office. That return easily topped the 65% delivered by the Dow Jones (DJINDICES:^DJI). 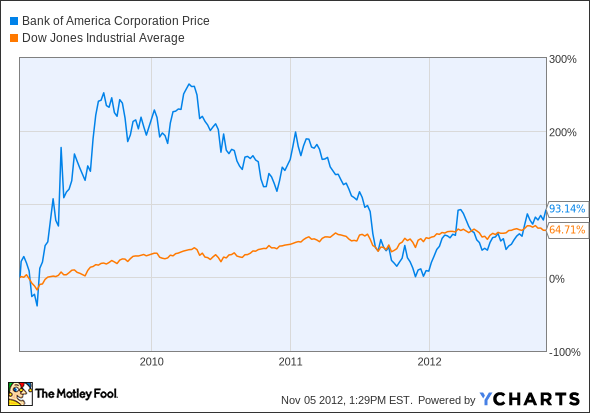 Of course, stock price only tells half that story (if that). Looking at the financial results from the bank, though, it's hard to not come to the same conclusion -- that is, that the last four years have been good for B of A.

On the downside, there's obviously been a seemingly unending wave of legal struggles that have hampered the bank's bottom line. But there's no doubt that this is a stronger, more stable bank than it was in the beginning of 2009, and this is readily apparent in the numbers. Meanwhile, the bank had slashed its dividend all the way down to $0.01 per quarter right before the president took office, whereas today, there is talk that a dividend boost is far from a delusion.

What have you done for me lately?
But is the above a fair picture of what Obama has done to help or hurt B of A? Probably not. A lot of what we've seen over the past four years -- especially early on -- was the carry-over of what was put in motion during the George W. Bush presidency. In a similar manner, we'll see more of what Obama's done play out for B of A in the years ahead.

As far as who's the better presidential pick for B of A in tomorrow's election, we'd need to think about the key levers in the bank's business. The two at the top of the list: interest rates and health of the economy.

On the first, what seems fairly likely at this point is that no matter who wins, we're going to see a change at the top of the Federal Reserve. Romney has said that he wouldn't reappoint Fed Chief Ben Bernanke, while rumor has it that Bernanke will step down even if Obama wins. In the latter scenario, even if Bernanke doesn't stick around, we'd likely see someone step in that shares the "easy money" approach that Bernanke has taken. This isn't ideal for banks from the perspective that lower rates have crimped lending profits, but it's helpful to the extent that it boosts the economy. It's also "the devil you know" for banks as of now.

If Romney comes in and puts a hawk -- that is, somebody more concerned with inflation who is likely to raise rates -- at the head of the Fed, this could complicate things a bit for the banks. Longer term, higher rates could be a benefit to the extent that lending spreads widen. Shorter term, though, it could be dicey if borrowing costs rise faster than longer-maturity loans. And of course, if pulling out the low-rate rug takes the economy from near-stall to full-stall, that would hardly be beneficial to banks.

And speaking of our near-stall economy, this is a big issue for many of B of A's businesses from lending demand to investment banking services and wealth management. While the presidential election will certainly have some bearing on what course the economy is set on, I view the Congressional elections as the much more likely needle-movers here. Considering the painful deadlock we've seen in Congress over the past few years and the looming "fiscal cliff," any big changes in the two houses of Congress could be a big deal for the economy and banks like B of A.

The results of the election do have the potential to change the operating environment for B of A in certain ways. However, for long-term investors, those near-term issues are easily trumped by far more important factors such as navigating the legal challenges (which, sorry, I don't believe disappear under Romney), making sure the bank is in the right business lines, and digesting its Countrywide and Merrill Lynch acquisitions in a way that allows the bank to leverage the good aspects of those companies while bringing back the core banking culture that made B of A a great bank in the first place (yes, it was that at one point).