An overview of diabetes and the big pharma players at the top of the game.

The diabetes treatment business is booming. According to the Centers for Disease Control and Prevention, 25.8 million Americans are affected by diabetes. That's more than 8% of the U.S. population. S&P's Rating Services estimates that the global diabetes market will grow to 280 million people in the next 20 years, elevating sales of diabetes-related treatments from $35 billion to $58 billion.

Which company has the best shot at dominating the diabetes market of the future? 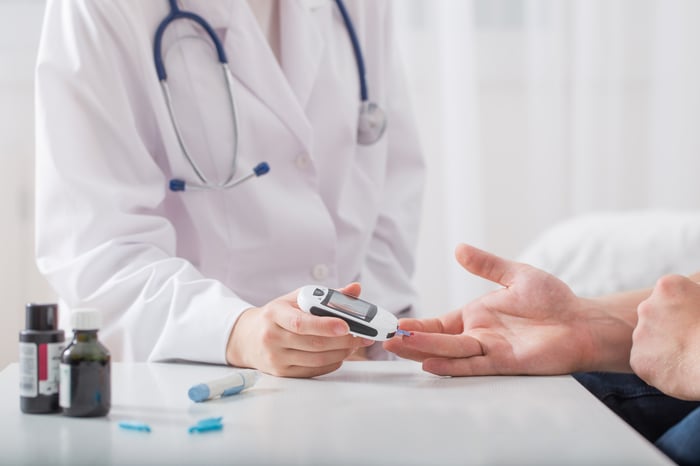 What is diabetes?
Diabetes is a disorder where the body isn't properly able to process the glucose broken down from food. Insulin is a hormone that is supposed to direct glucose into cells to provide energy. If the insulin isn't able to successfully do this job, an excess of glucose builds up in the blood, and this can lead to serious side effects including cardiovascular problems, kidney failure, and blindness.

Novo Nordisk controls a quarter of the global diabetes market. In 2011, diabetes products alone brought in $8 billion for the company. There are estimates that revenues could exceed $20 billion by 2018. Novo's product portfolio includes the fast-acting insulin analog pen NovoLog and the long-acting injection Levemir.

Sanofi maintains an 18% market share in diabetes treatments predominantly because of the long-acting insulin Lantus, which brought in $5 billion in 2011. Lantus is bolstered during meals with the fast-acting insulin Aprida.

The success of the top two companies demonstrates the importance of including different types of insulin in a product portfolio. Insulin-dependent diabetics often need to alternate between fast and long-acting types of insulin in order to properly balance glucose levels, particularly around meals.

A dark horse in the insulin race is MannKind and its rapid-acting, inhalable insulin Afrezza. This treatment has lost out on approval from the Food and Drug Administration twice, but the company is venturing forward for a third try. There were already failed inhalable insulin projects from Pfizer, Eli Lilly, and Sanofi, but if Afrezza could get out of the gate, the convenient dosing could help it secure a decent market share. MannKind is rather short on cash, and a partnership could also make Afrezza's success the benefit of another big pharma company. However, MannKind must first gain FDA approval for its product before it can try to gain market share.

Type 2 diabetes players
Type 2 diabetes is more common and differs from type 1 because the body produces insulin but isn't able to process it correctly. Patients are typically diagnosed over the age of 30, there tends to be a genetic predisposition, and obesity is closely related to this type.

There's one prominent type 2 diabetes drug that has all the manufacturers racing to catch up. Byetta is a twice daily insulin treatment that was developed by Amylin, a biotech company that was jointly acquired by the big pharma duo of Bristol-Myers Squibb and AstraZeneca. Byetta brought in $518 million in 2011. Amylin chased itself with Bydureon, the once-a-week version of Byetta, which received FDA approval in early 2012.

Novo Nordisk brought the once-daily Victoza injection to market after Byetta, but the release of Bydureon took the wind out of its sails. Sanofi is currently developing a key drug that is meant to become a competitor of both Byetta and Victoza.

Treatments for type 2 diabetes have greater revenue potential, but it's currently the companies with the greatest market share of insulin treatments that sit at the top of the heap.

Final thoughts
Diabetes treatments will remain a growth industry, and the companies that will move to the forefront are those developing products with greater convenience for the consumer. The race for a Byetta rival attests to the fact that more efficient dosing will drive greater revenues in the future.

Fool contributor Brandy Betz has no positions in the stocks mentioned above. The Motley Fool has a disclosure policy.
We Fools may not all hold the same opinions, but we all believe that considering a diverse range of insights makes us better investors.