Southern Company (NYSE:SO) reported earnings yesterday, and profits are up. But the company is undergoing significant self-investment, and Southern tomorrow could look very different from Southern today. Let's dig deeper to see how this utility stacks up.

Number crunching
Southern's sales are down, a fairly uncommon occurrence with utilities this quarter. With $5.05 billion, this represents a 7% drop from 2011's third quarter. However, Wall Street expected worse. Southern's sales exceeded Mr. Market's $4.74 billion estimate by around $300 million.

Revenue has been a sore spot for Southern for over a year now, with sales dropping for four straight quarters. Income has flopped around a bit more, but has generally been on the rise.

For some long-term perspective, take a look at Southern's sales and net income over the past five years: 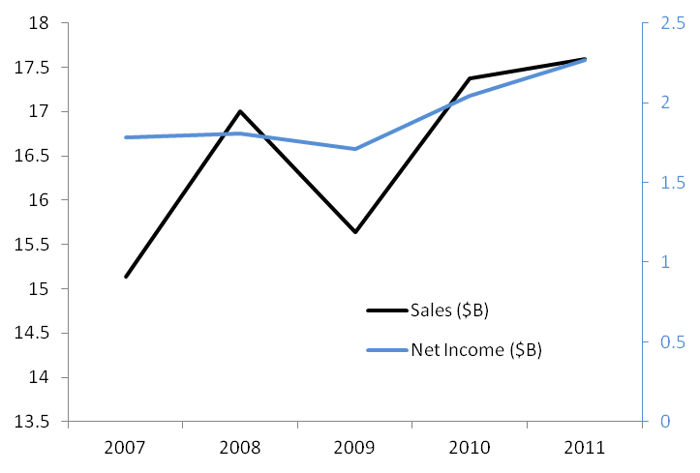 Miserly macro
Utilities are in a rut. As Chairman, CEO, and President Thomas Fanning put it, "The economy has slowed due to uncertainty around the elections, the fiscal cliff and the slowing world economy. Until these issues are resolved, the near-term outlook for the national economy will be unclear."

In the wake of Superstorm Sandy, certain utilities will be hit hard in the years to come, and things aren't exactly looking up for the economy, either. Southern Company's Alabama, Georgia, Florida, and Mississippi operations squeezed by with little Sandy damage, though, and the only weather that significantly affected Southern's quarterly earnings was the mild kind.

Eyes on the prize
But companies always mope about macro, and utilities always whine about weather. As long-term investors, what we care most about is whether Southern Company is effectively managing its business to ensure long-term growth and viability.

Southern has been undergoing significant capital expenditures over the past couple years to do just that. Over the past quarter, the company received approval for an additional $292 million, bringing the total to $2 billion through Dec. 2011.

Responding to an analyst's question during Southern's earnings call, Thomas Fanning said: "When we think about this $2 billion of additional benefit that our customers are getting relative to what was originally estimated, this has been a dynamite environment in which to finance big capex projects." CFO Art Beattie piped in, quoting average financing at about 3% for an average term of 19 years.

Dividend dynamite?
With all this capex, investors might be wondering whether Southern's 4.3% dividend yield is the best use of the company's funds. It's got nuclear and coal projects under way, and is in the process of expanding its proprietary "clean coal" technology around the globe. Let's take a look at how Southern's dividend spending stacks up against other utilities:

Compared to the industry as a whole, the company's dividend is 10% higher, its payout ratio is 28% higher, and its debt-to-equity is 7% lower.

What this means is that despite Fanning's aggressive stance on the company's self-investment, Southern Company isn't really acting much differently from every other utility. If anything, it's erring slightly on the conservative side, returning more money to shareholders and taking less advantage of cheap debt to push the company forward.

Foolish bottom line
Southern Company's stock has returned a lackluster 3% in the past year. And despite its significant capex, its valuation remains pricey compared to other utilities with similar offerings. The company is increasing margins, and I don't expect its dividend to dip anytime soon, but I'm not convinced that its outlook offers investors the best bang for investors' bucks.