It's beginning to look like we're in store for a banner holiday shopping season this year.

We're still weeks away from Black Friday; so don't break out the champagne just yet. High gas prices and worries over the coming fiscal cliff are just a few of the concerns about shoppers' financial health this fall.

But heading into the all-important holiday season, there are encouraging signs that this could be one of the best holiday seasons in years for consumer-facing companies.

1. Housing is recovering
On the big-picture side, housing is undeniably on the mend. And that bodes well for consumer spending.There have been plenty of economic indicators confirming that we're climbing out of the bottom in the market, including sales, construction, and housing starts.

But the one that feeds into consumer spending more or less directly -- home prices -- is probably the most encouraging trend over the past year: 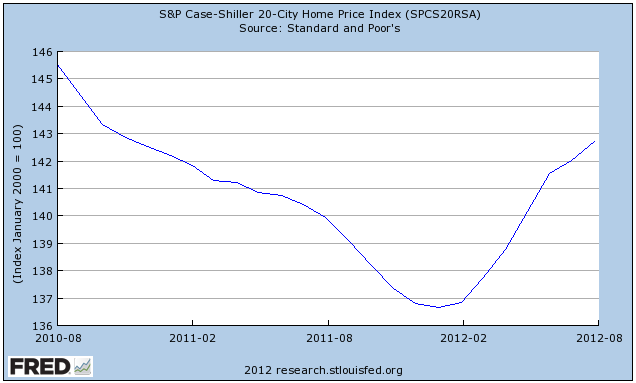 The so-called "wealth effect" from rising home prices tends to spur consumer spending as people react to their increasing net worth by shopping a bit more. That trend has been working in reverse for years, as housing prices dove after the financial crisis. But the drag on spending finally looks ready to turn.

For example, a North Carolina man recently told Bloomberg that his rising home value was a key reason for why he bought a new car last month. Mass-market car producers like Ford (NYSE:F) could already be benefiting from judgments like that. Ford booked some of its best October sales results in the U.S. since 2004, although weakness in Europe dragged down an otherwise strong global earnings report.

2. Consumers are getting confident
On a more micro-level, consumers seem to be stirring from their years-long retreat. And they are reporting higher levels of confidence, and bigger plans for spending this season.

According to the Michigan consumer sentiment index, shoppers are heading into this holiday season more confident than they've been in years (link opens PDF file). The sentiment index hit 82.6 last month, up from 78 in September and 74.3 the month before. One particularly bright spot from the survey: "Consumers judged their current financial situation more favorably in October than anytime in the past five years."

Market researcher NPD also found an encouraging uptick in the number of shoppers saying that they plan to spend as much as as they did last year, or more. High on their list of planned shopping destinations this season are discount stores and club warehouses such as Costco (NASDAQ:COST), which is off to a strong start so far this fall, reporting a comparable-sales gain of 7% in October. Shoppers are clearly enjoying Costco's treasure-hunt atmosphere. With sales momentum like that, the company is in position to attract robust traffic levels to its stores over the holiday months.

3. Companies are innovating
But consumers aren't the only groups that are getting bolder this season. Companies have been busy innovating all year. And they've launched a host of new products in an effort to entice shoppers into spending some of their increasing holiday budgets on gadgets.

In contrast with the past few years, all the major tech players, including Apple (NASDAQ:AAPL), Microsoft (NASDAQ:MSFT), Amazon.com, and Google, have launched new products into the growing tablet market. Microsoft is also out with the company's first new operating system in years, while its first foray into the tablet market -- the Surface -- seems to be off to a good start. And Mr. Softy's nemesis, Apple, has a full suite of tablets to offer consumers this year, including the just-launched iPad Mini. Apple has also reported good initial sales figures for the small-ish iPad.

There are even encouraging signs in the video-gaming sector, as consumers have a new reason to shop at their local GameStop (NYSE:GME) store. GameStop has been reporting declining sales for several quarters, with gamers waiting for a long-overdue refresh in console hardware. But those declining traffic levels could turn soon. Starting Nov. 18, fans will be able to buy the first next-generation console in six years, the Nintendo Wii U, when it hits shelves in the United States.

Foolish takeaway
A fair bit of holiday cheer is already baked into many of these retailers' stocks. Apple, for example, is up 45% on the year but down since the highs it notched in September. Costco and Microsoft have tracked the market's return, up 14% and 17%, respectively. GameStop and Ford are the laggards of the group, sitting at about where they started the year.

So there's a wide range of investment potential in this diverse collection. Still, the trend is encouraging, and it wouldn't be surprising to see some retailers put up record results this quarter.