If you haven't heard, there was an election yesterday. Obama will remain POTUS for four more years, and the markets are shifting accordingly. Coal stocks were crushed today, but is the country's leader ready to kill coal? Here's what you need to know.

Down we go
Let's face it: Coal companies are not exactly the inflation-proof slow movers they once used to be. Global recessions have hammered coal down, only to be shot up again by stimulus announcements. Over the past few years, thousands of investors have wiped the coal dust off their hands and shed this energy for natural gas, oil, and/or renewable energies. 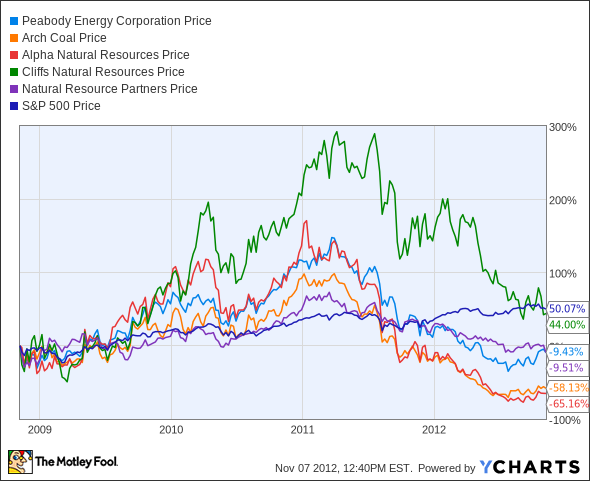 Today, prices have dipped even lower. As of this writing, all coal stocks are down, and Arch and Alpha have both swallowed double-digit losses.

Digging deeper
Elections are over. Take a deep breath, regain your sanity, and remember that there's a whole rainbow of colors between red and blue:

Few would argue that Mitt Romney wasn't coal-friendly, but Barack Obama is hardly a coal company's worst nightmare. Obama's energy policy advocates for an "all of the above" approach, and coal plays a prominent role in reducing our dependence on dirty and/or foreign energy sources.

The president's policy can best be summed up in two goals:

In March 2011, the Obama Administration released its "Blueprint for a Secure Energy Future." In no uncertain terms, the paper includes "clean coal" as part of its "80% by 2035" clean energy goal.

The administration has put its money where its mouth is. The Recovery Act has already paid out $3.4 billion to invest in carbon capture and storage technologies, and has even created a task force to develop a 10-year "clean coal" strategic plan.

As a pilot project for "clean coal," Summit Energy is currently seeking federal loans for a $2.5 billion coal-fired power plant that could capture 70% of its carbon emissions.

In 2010, the U.S. joined 37 other countries and a host of multilateral organizations in creating the Global Methane Initiative. Among other things, the initiative will work to increase methane recovery and use at coal mines worldwide.

Coal with a catch
But it's not all sunshine and soaring stocks. Energy Secretary Steven Chu has his Nobel-Prize-winning notions set on natural gas for America's domestic energy future. Cheap natural gas has been the bane of coal's existence over the past few years, and coal could find itself pushed to the back burner if Steven Chu continues to support natural gas technology.

Plus, for all the Administration's talk of "clean coal," methane has met its match with Barack. The president has pledged to eliminate more than $46 billion in fossil fuel subsidies, and tougher methane restrictions could drastically increase costs for coal companies. The U.S. Chamber of Commerce estimates that over 30 gigawatts of coal-fired electricity is already set to retire, and that number could continue to grow.

Should coal stay or should it go?
The energy shakeup is not over yet. But for those who think today's election is the last nail in coal's coffin, think again. Direct costs will most likely go up as coal cleans up its act, but subsidies could end up making this transition profitable for companies. Now, whether coal can clean up its act... that's a question for the task force.