It's been a weird week for investors with a yen for patent-based business models.

First, video ringtone vendor and occasional search patent wrangler Vringo (NYSEMKT: VRNG) scored a patent infringement victory against AOL (NYSE: AOL) and Google (NASDAQ: GOOG). But share prices fell on the verdict because the $30 million up-front damages were far smaller than the $493 million the company originally sought. Vringo shares are still down 19% from pre-verdict highs as investors fret over the judge's final say on damages, licensing, and potential injunctions. But the early enthusiasm changes the picture a good deal -- the stock is up 27% from last Friday's closing prices.

Then mobile security expert VirnetX (NYSE:VHC) landed a much larger win against Apple (NASDAQ: AAPL). Cupertino was ordered to pay VirnetX $370 million to make up for misuse of the company's patents in the FaceTime video chat app. Sure, investors were hoping for more, but this is still a potential lifesaver for a company with less than $40,000 in trailing revenue. The company recorded a $200 million payment from Microsoft (NASDAQ: MSFT) two years ago in a case based on many of the same communication patents, but that windfall never led to any significant license royalties.

Unlike Vringo, VirnetX jumped sky-high on the news. Then again, investors didn't build up expectations to the moon before the court order came down. This stock is also up 25% this week.

So far, so good. The weird part? These victories had absolutely no effect on fellow patent managers such as InterDigital (NASDAQ:IDCC) or TiVo (NASDAQ:TIVO). Both of these stocks tend to rise and fall with major developments in patent sales and lawsuits because InterDigital is a patent-licensing specialist and TiVo is moving in that direction. But the stocks have been trading sideways all week long.

And let's not forget about Universal Display (NASDAQ:OLED). The OLED technology researcher also makes a pretty penny from patent license sales, though it's augmented by selling the materials that go along with the licenses. That stock crashed hard today and is down 29% for the week. Last night's earnings report was a huge disappointment because the OLED market isn't developing quite as fast as Universal's management and investors had hoped. 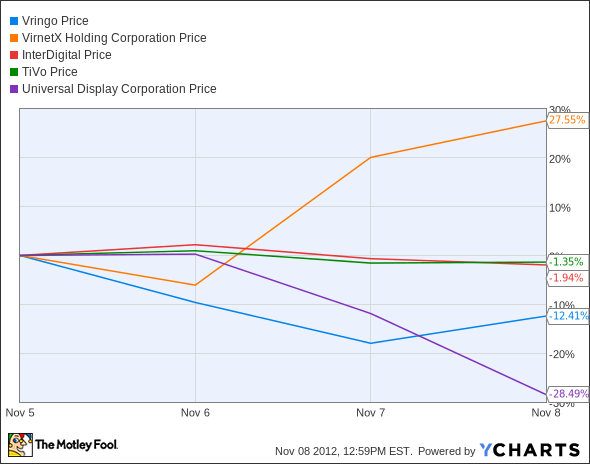 The upshot of all this is very simple. The formerly monolithic patent licensing sector is separating. Investors are paying less attention to broad licensing trends while focusing more on each company's prospects and fundamentals. This is good. It's healthy.

I'd still worry about Google and Apple filing appeals on this week's legal losses, making it a little early for Vringo and VirnetX shareholders to pop the champagne. Likewise, I think it would be a mistake to panic over Universal Display's soft quarter. But that's kind of the point -- it's getting easier and safer to evaluate these companies on their own merits nowadays, like any good investor should. The patent sector effect is fading fast.