As comedian Jim Gaffigan tweeted, "That fiscal cliff sounds even worse than one of those Clif bars." Opinions on all-natural energy bars aside, it's clear that the fiscal cliff doesn't look good for the economy in the short term. There's something worse, though, that affects the ability of the country to fend off future recessions. Because the current Federal Reserve policy could make any future recession less like falling off a cliff and more like falling down an up escalator, where the country will find it hard to stop tumbling, stand up, and reach prosperity.

The current Fed policy
Right now, the federal funds rate, which is what banks charge each other for overnight loans of their reserves held at the Fed, is 0.16%. The Fed originally set this target rate of 0% to 0.25% back in December 2008 on its way down from a high of 5.25% beginning in mid-2006. This is called ZIRP, or zero interest rate policy. As you can see, the federal funds rate has never been lower, especially for this long of a period: 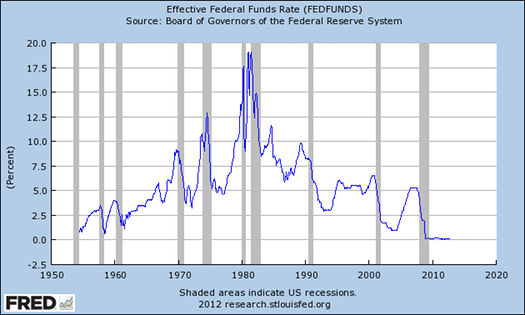 So when the economy needed a little pick-me-up during the last recession, it lowered rates to near-zero. But the economy wasn't responding to near-zero interest rates as quickly or with as much gusto as the Fed wanted, so the central bank implemented some creative policies that were previously used in Japan: quantitative easing. As the Cleveland Fed writes, "some policies aim at lowering long-term interest rates through purchases of longer-term Treasury securities, agency debt, and mortgage-backed securities."

Now, the federal funds rate still remains near zero, and the Fed recently reached deeper into its unconventional playbook and announced a program of unlimited quantitative easing, which some call "QE infinity," on top of the previous rounds of QE1 and QE2. Where do these policies lead?

Japan's path
Japan implemented similar plans in an attempt to recover from its own property bubble in the early 1990s. Since 1995, Japan's central bank has kept its discount rate below 1%. Since 1996, the iShares MSCI Japan Index (NYSEMKT:EWJ) has returned an astonishing loss of more than 40%.

While Japan's demographics, culture, and economy differ greatly from the U.S., our similar central bank actions make it possible that we are following in its path. In terms of indexes, that path does not look prosperous. Recently, however, it seems that a stronger economy and stabler housing prices might mark our departure from following Japan's poor equity performance. Since the Federal Reserve lowered rates in Dec. 2008, the S&P 500 (SNPINDEX:^GSPC) is up more than 60%, the Dow Jones Industrial Average (DJINDICES:^DJI) has risen more than 50%, and the Nasdaq Composite (NASDAQINDEX:^IXIC) has nearly doubled.

Teetering on the edge
While there seems to be a strengthening recovery, near-zero rates have put us in a precarious situation.

The zero-bound rate takes away the traditional tactic to help stabilize unemployment and inflation. And the Federal Reserve forecast in September that rates will remain zero-bound until 2015 -- a year longer than its previous forecast of 2014. Pushing a rate increase further into the future will force the Fed to continue using unconventional tactics.

Other unconventional tactics include allowing the federal funds rate to go negative -- meaning borrowers would be paid to take money. The New York Fed warns, "If interest rates go negative, we may see an epochal outburst of socially unproductive -- even if individually beneficial -- financial innovation." And more financial innovation is not what will help grow a stable economy.

It may also be difficult for the Fed to ever raise rates to regain its primary tool. If rates go unchanged until 2015, it will mark seven years of zero-bound rates. If growth never appears strong enough for the economy to stomach a rise in rates, the Fed may find itself trapped like the Bank of Japan.

Finally, some fear a liquidity trap. This means that any new monetary policy won't be effective because new money will be held onto in hopes of higher rates in the future. Banks and spenders want to hold onto their money to keep it liquid instead of taking the risk of investing in business.

Should the fiscal cliff, or any other event, push the U.S. into a situation where it needs stimulus, the Federal Reserve doesn't have its main policy tool to tinker with the economy, and it will have to rely on more complicated and likely less understood practices.